The day he was waiting!

Fionn keeps wanting to go! “I want to go!” He was looking forward to the day when we told him that we were going to Universal Studios Japan (USJ).
The day we told him we were going to USJ, he was overjoyed.
The moment he entered the park, a world he had never seen before opened up before his eyes, and he was thrilled! 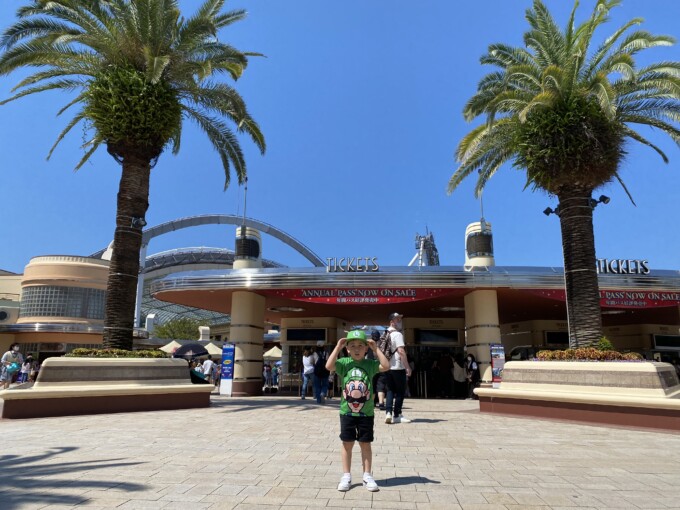 When he woke up that morning he was like, ‘The day is here! Yay! He jumped up and down and was so happy.
I had forgotten how it felt as an adult, but when I saw Fionn, I was excited too. 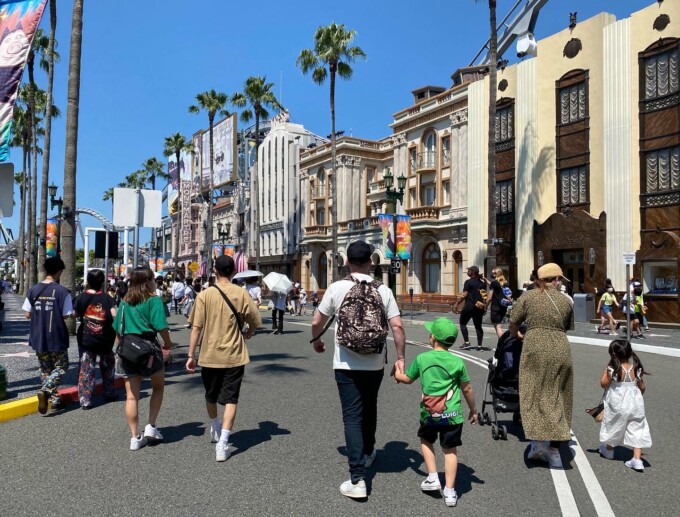 He was wearing a Luigi cap and a Luigi T-shirt that he had bought the day before.
He was told by the crew, “Luigi! Have fun!” and “Luigi looks great on you! He looked so happy to hear that. 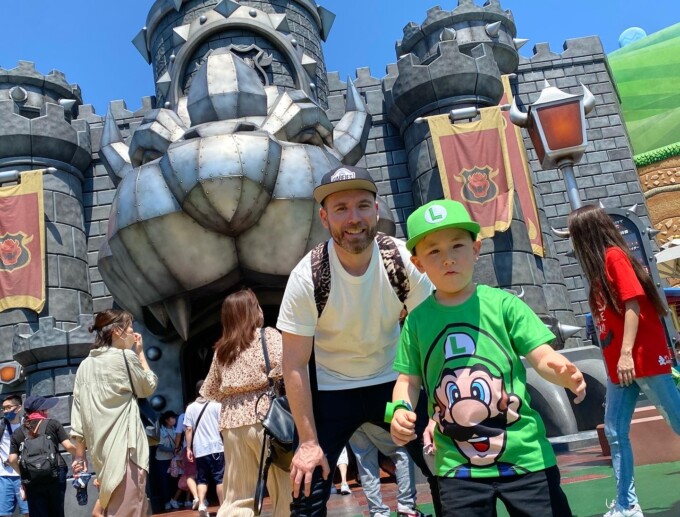 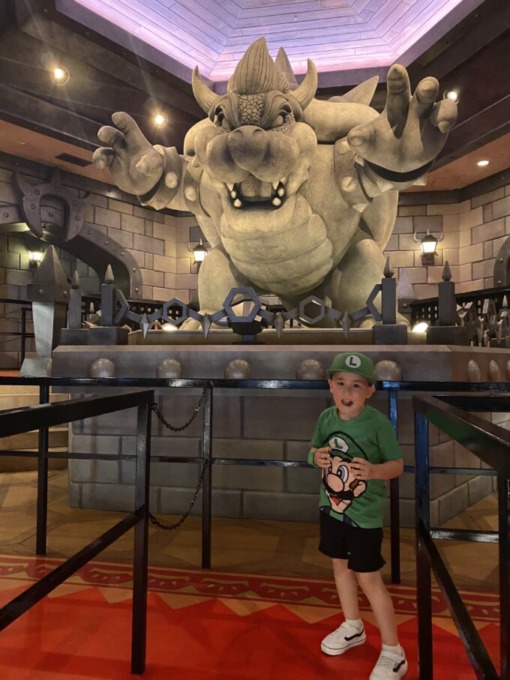 And he was looking forward to Mario Kart the most, the longest wait was 45 minutes!
He loved it so much we rode it 3 times. The second time was 30 minutes and the third time was 5 minutes, which was pretty easy. 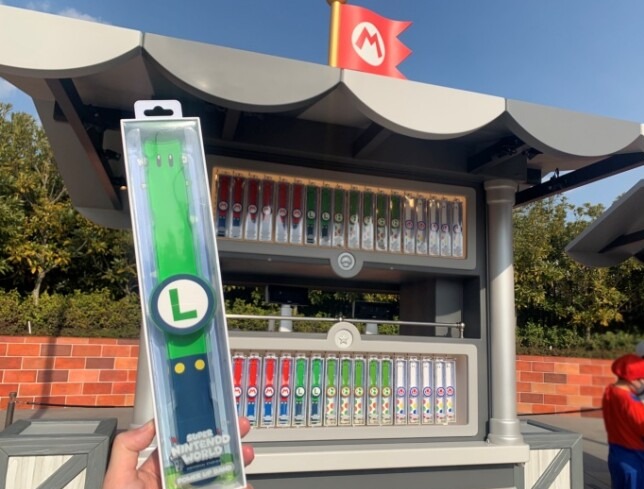 And the great thing about the system here is this power-up band that Fionn wears on his arm!
You can buy them all over the place (3,800 yen), and when you link them to an app on your phone, they work!
You can collect coins, stamps, and keys just like in the game world! It’s so much fun. 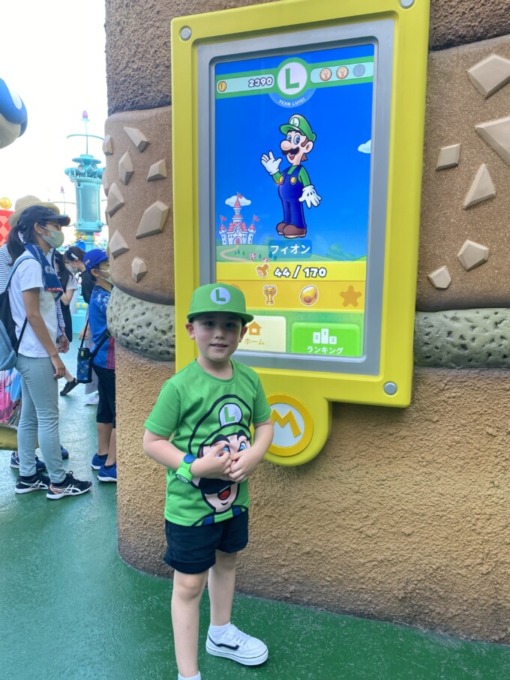 And if you hold your band up to the “M” mark, you can check your current status like this.
The more stamps and keys you collect, the more attractions you can enter. It’s an amazing system. 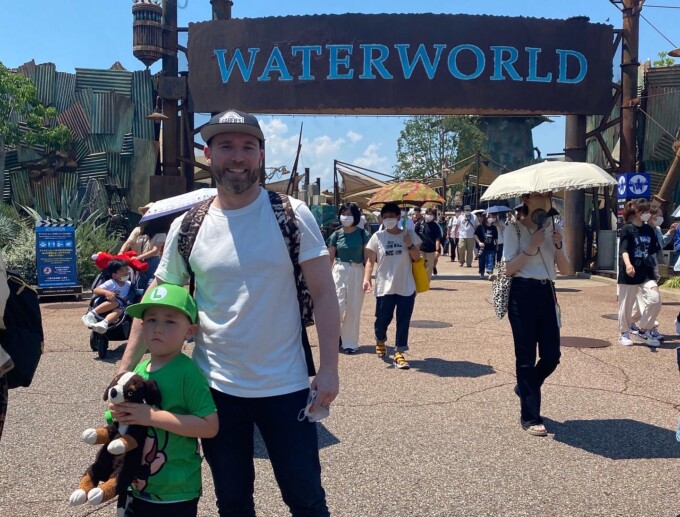 Of course, it wasn’t just my son who was excited.
For daddy, there were many exciting attractions. One of them was Water World. 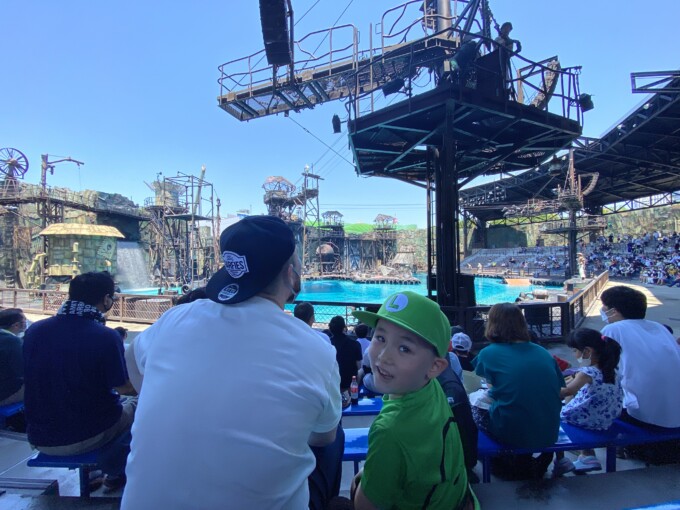 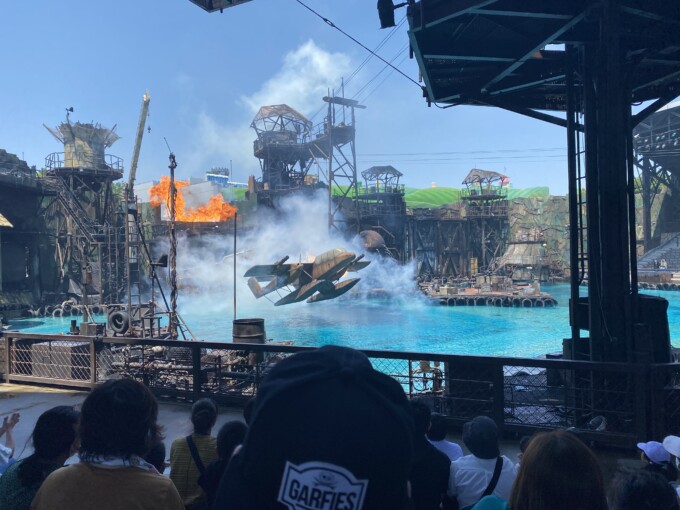 For Emmet and Fionn, who both love movies, USJ has so many things connected to the movies scattered in various places in the park.
It was the little signs on the street, the music playing, the Jurassic Park gate!
The name of the drink store, the posters, and even I was moved by every little thing because of how happy it made them. 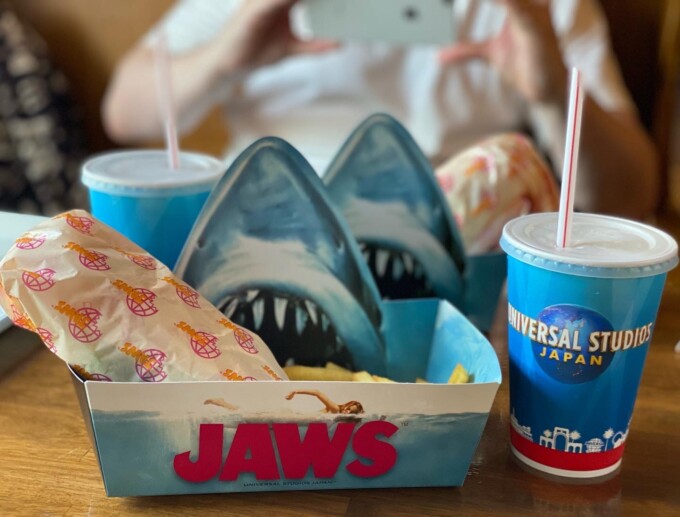 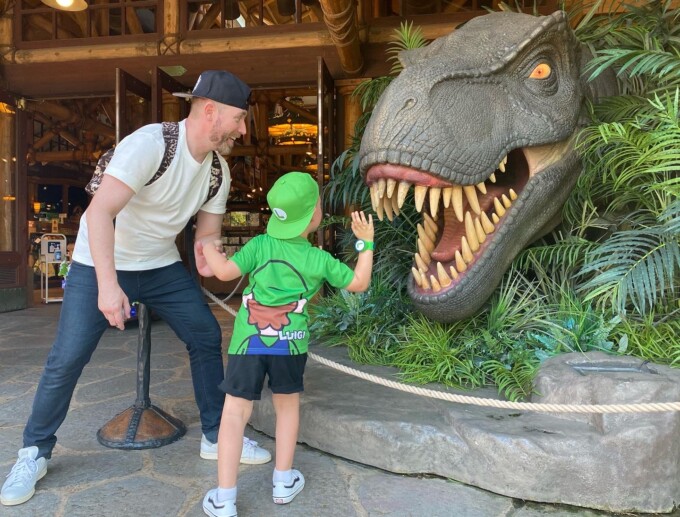 Yes, yes! I was so worried about the mask problem.
Fionn has almost never worn a mask before, so I was really worried about how it would be in 35+ degree heat.
But when we entered the park, they didn’t say anything about masks, and when we went in, most of the little kids didn’t have masks! 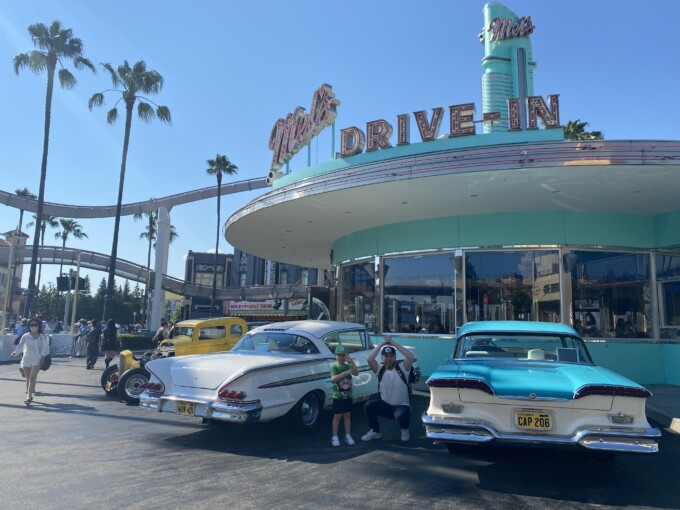 I guess they don’t want to wait until something terrible happens to the children, like heat stroke, so they seem to be more lenient.
By the way, I was also using my chin to move my mask around (lots of people do that!).
I was warned twice when I was in the queue during the waiting time, but it was not so severe. 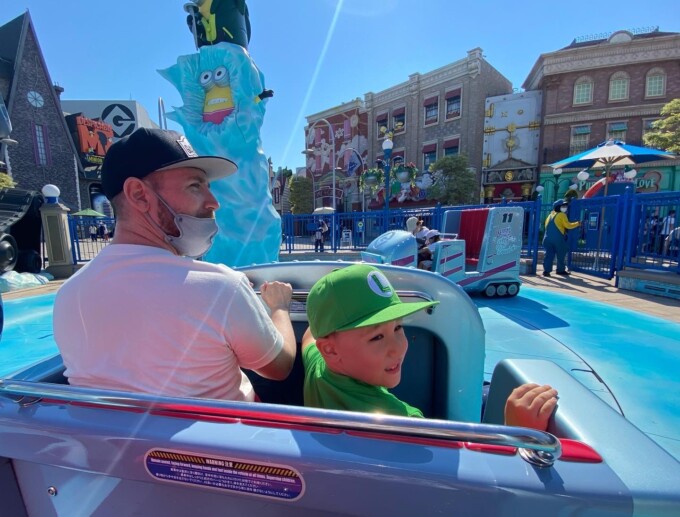 Besides that, there were a lot of cold and strong breezes coming out of the air, and a lot of other things were taken care of.
It was a very hot day, but surprisingly manageable and I was fine. 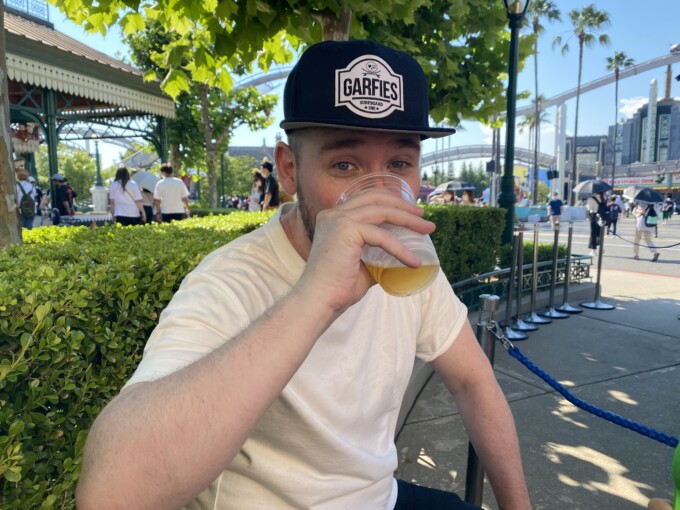 Of course, we took a break and had a beer. LOL! 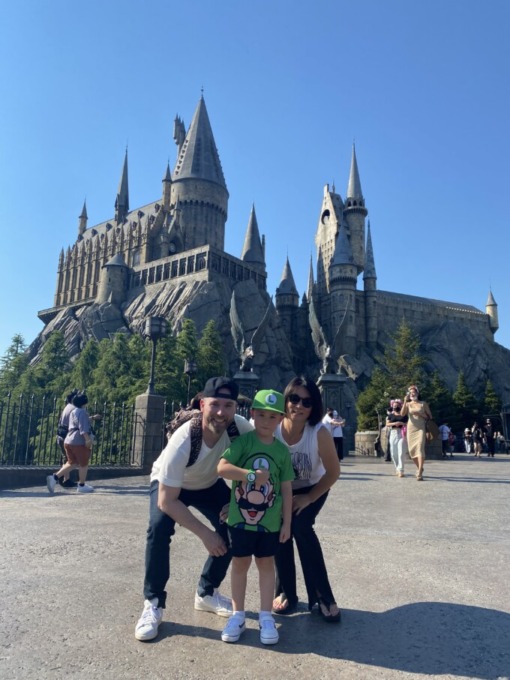 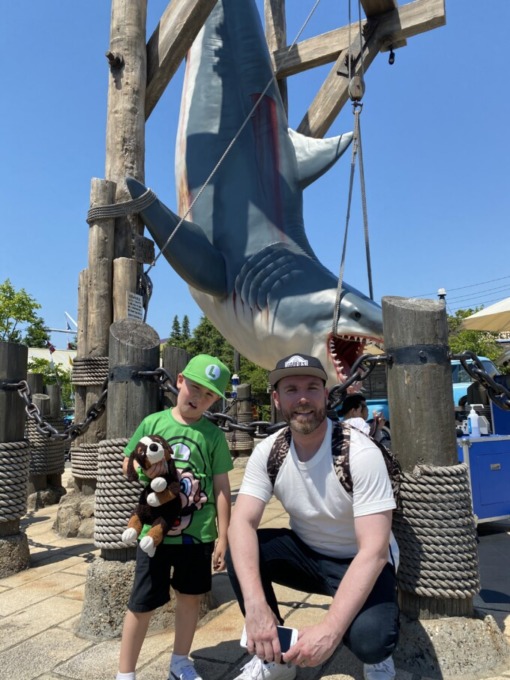 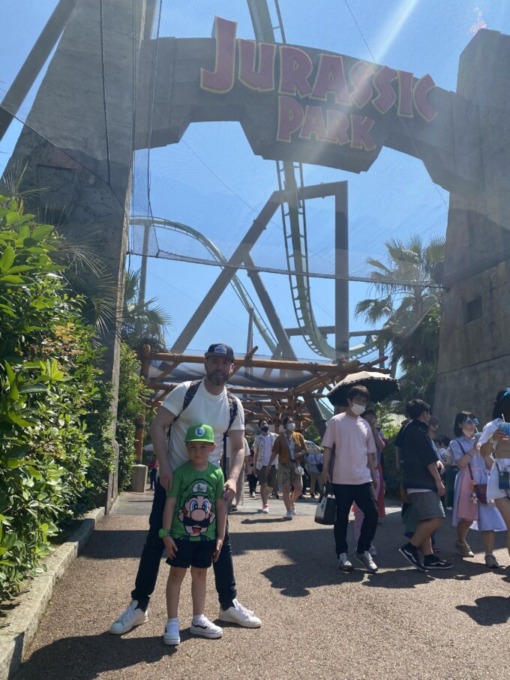 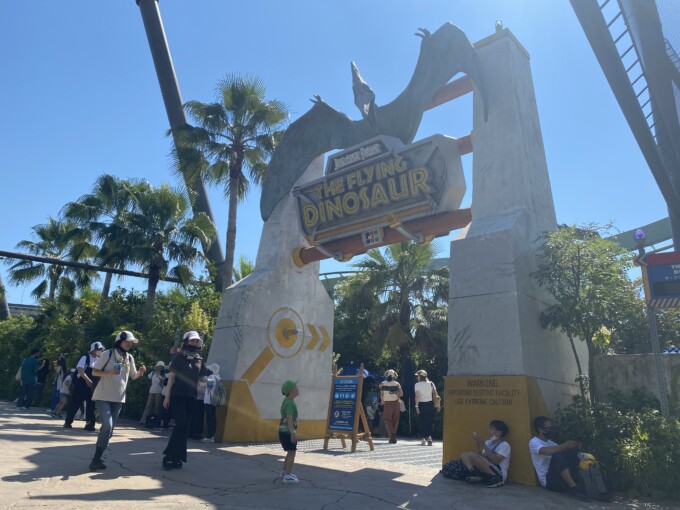 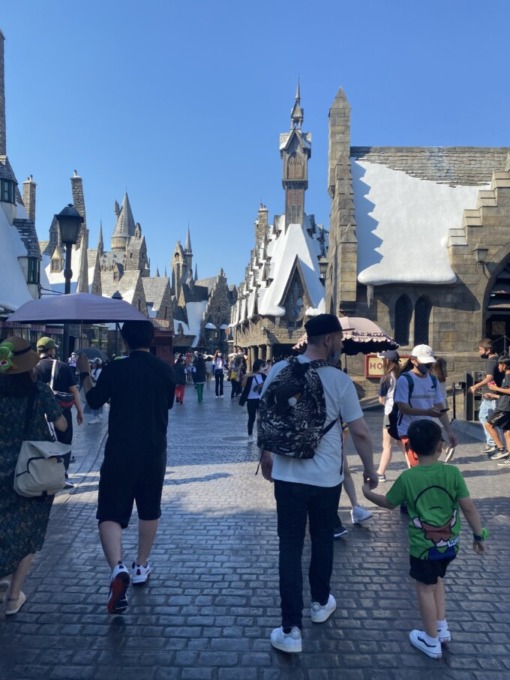 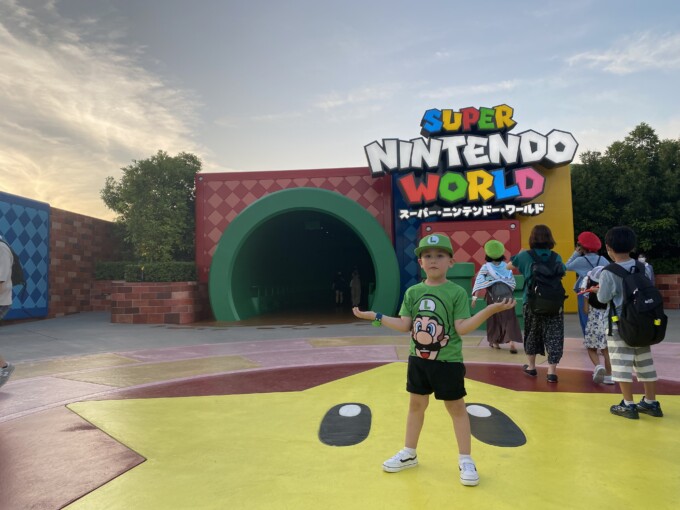 I thought I must be skinny after all that walking and sweating, but it turns out I’m fat!
What in the world is going on with my body? 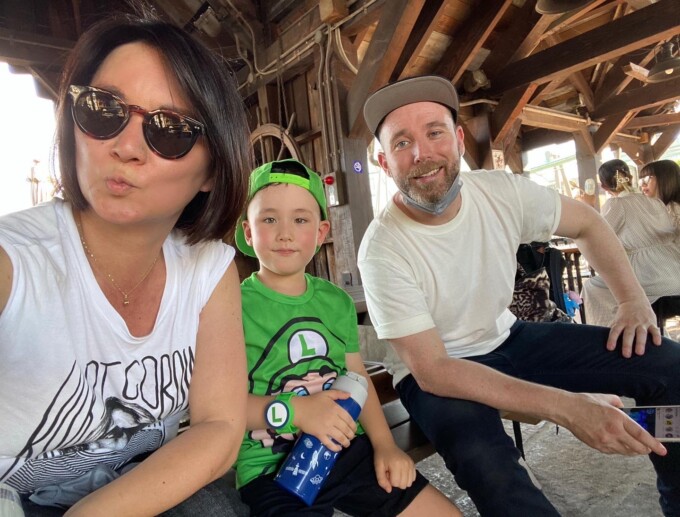 The plan was to go back to the hotel during the day and have a rest! But we didn’t have time to do that.
We couldn’t finish all the attractions in one day, and there are so many more we wanted to see and do!
We’ll have to go back soon. ！！！！ 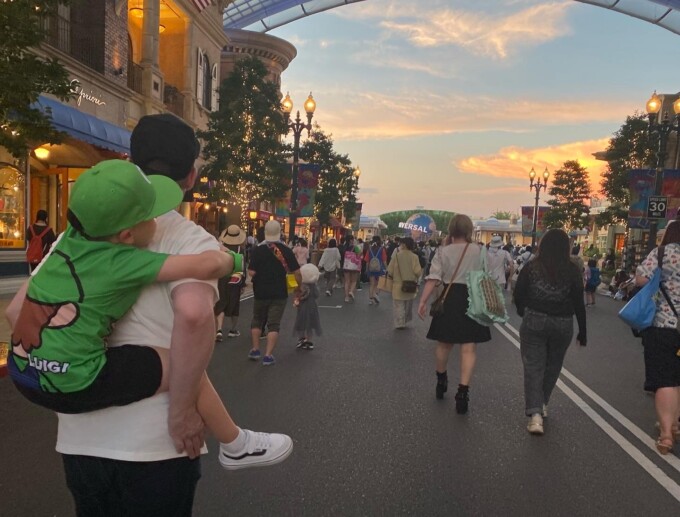 Fionn, who is always so energetic, got tired by the end! He said, “I can’t move my feet anymore!”
Emmet was giving him a piggyback ride. I’m sure it was hard on his little body.
He was so excited, thrilled, and exhausted from the extraordinary experience. 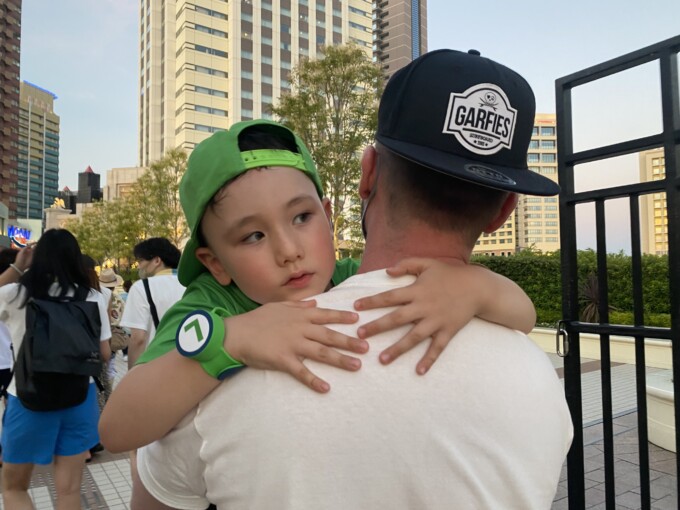 As a result, we were all very tired, but it really was a great day!
Going to a theme park with kids is a lot of fun because they have such a pure heart, and it`s easy to see the fun in their faces!
I’m so glad we were able to give Fionn a great experience and good memories!
This kind of thing is really important.