Yesterday, after dinner and some glasses of wine and a lot of talking with my father-in-law…
I had no more time to write a blog and went to bed, so this is what happened yesterday! (This is Tuesday) 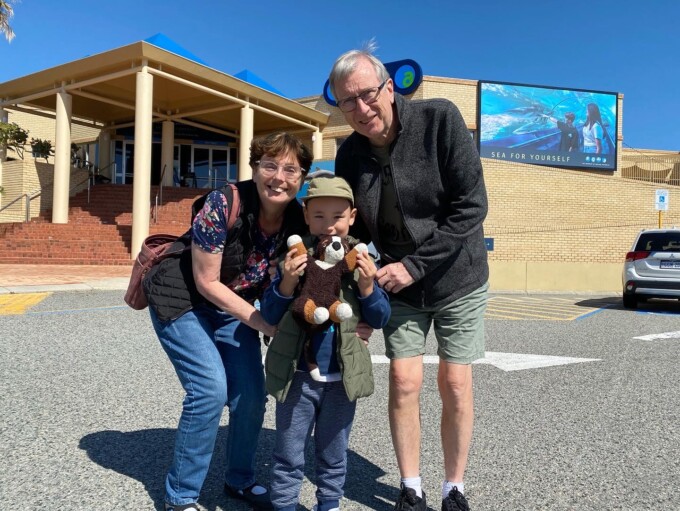 As usual, my husband was busy seeing his friends, so Fionn, Nana, Grandad and me went to an aquarium about 20 minutes away from our house. 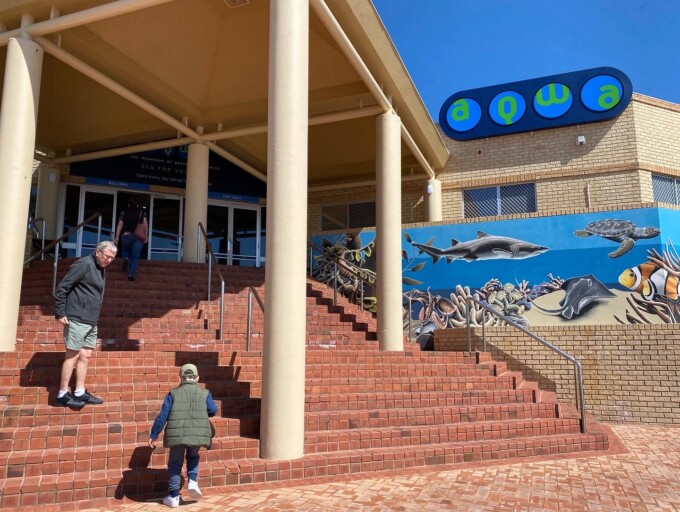 I’m glad I’m a wife who can have fun with her husband’s family without any stress, even if he’s not there!
Some people don’t like this situation, I’m sure. lol 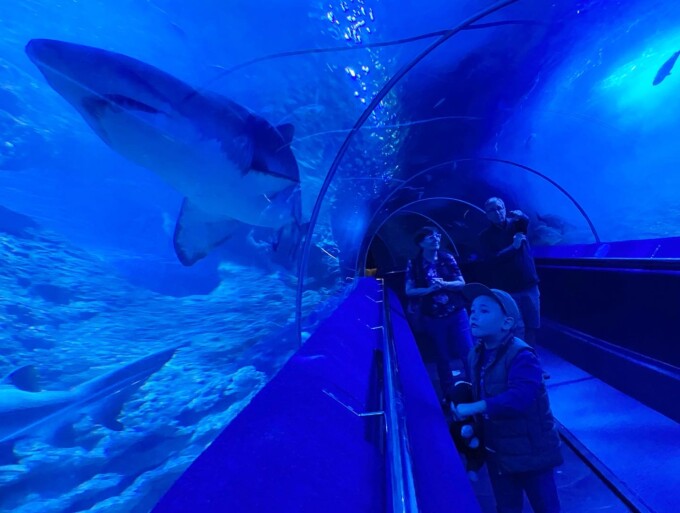 This is the aquarium where Eme-chan used to come often when he was a child.
The name of the aquarium is “aqwa”, which is a combination of “aquarium” and “WA” (Western Australia).

I visited there when I first came to Perth.
The floor moves slowly and there is a tunnel around the aquarium, so you can see marine life as if you were under water!
You can see sea creatures as if you were in the water! It’s an amazing aquarium! 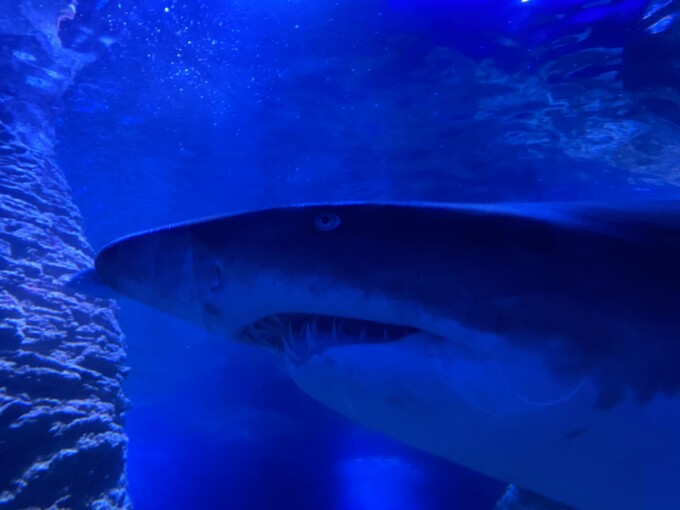 But once Grandad held Fionn in his arms and took him closer to the tank to show him the inside. A shark came right in front of him and he got really scared because of the sharpness and coldness of its eyes.
It’s true that even adults get a little scared when they see a shark’s cold eyes up close, so I think Fionn’s reaction was an animal instinct. 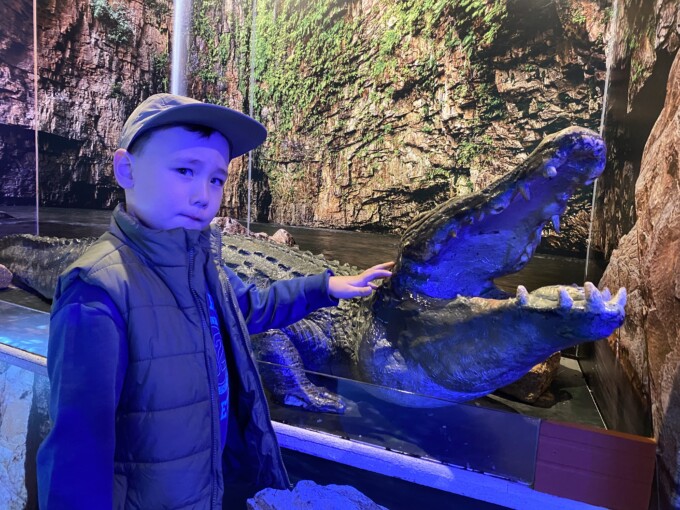 Of course, being in Australia, there are crocodiles (this is fake) and a pool where you can touch the creatures, and I was having a great time! 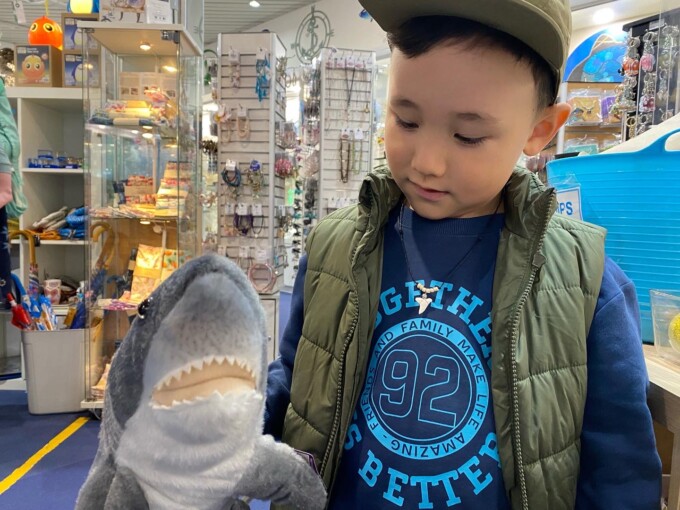 I often go to aquariums in Japan as well, but in a different country, the atmosphere and the way they display the animals is different.
I think it was a new experience for him!

There was a place where we could go shopping, and I don’t know why he was so scared but he got a stuffed shark and a necklace made of shark’s teeth.
If an adult had worn it, I would have thought it was “tacky”, but a 5 year old boy thought it was cool and looked so happy to have chosen it!
It was so cute to see him so happy to wear it! 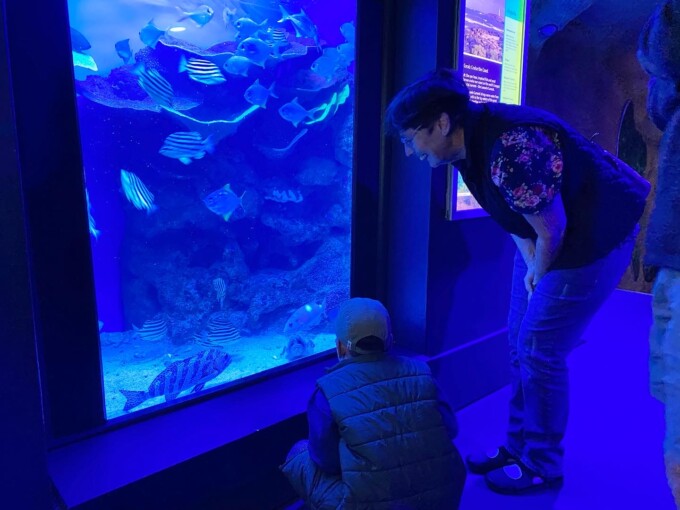 I had a thought that came to mind during our conversation when we bought the necklace.
Nana and Grandad immediately said, “When you go to kindergarten in Japan, wear it and show it to everyone!”
Fionn was like, “I can wear it!” He was so happy.
But in Japan, wearing jewelry, manicure, changing hair color, etc. are not allowed at school or in the kindergarten.
The teachers at school here would say, “Cool! or “You look great! or “That’s nice!” 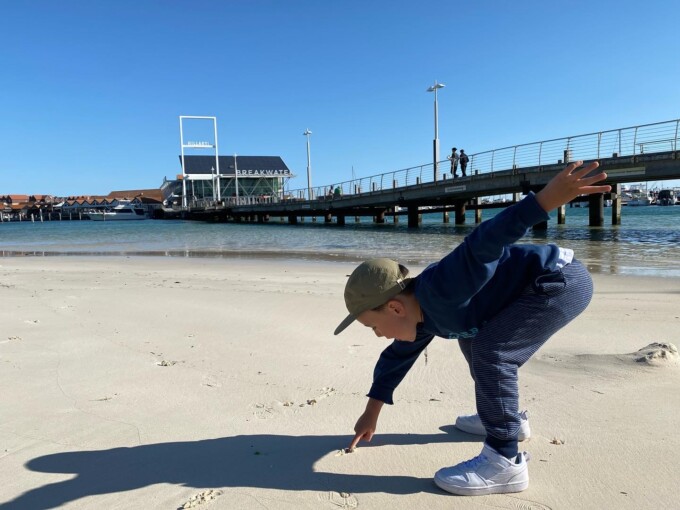 In Japan, however, you are not allowed to wear accessories, and if you do something out of the norm (or at least common sense in Japan), you will receive complaints from parents, and the preschool or school will not approve of it.
Therefore, from such a young age, individuality is eliminated, and the tendency to follow the (Japanese) right path, to be the same as everyone else, and to drive out the unorthodox becomes the norm. 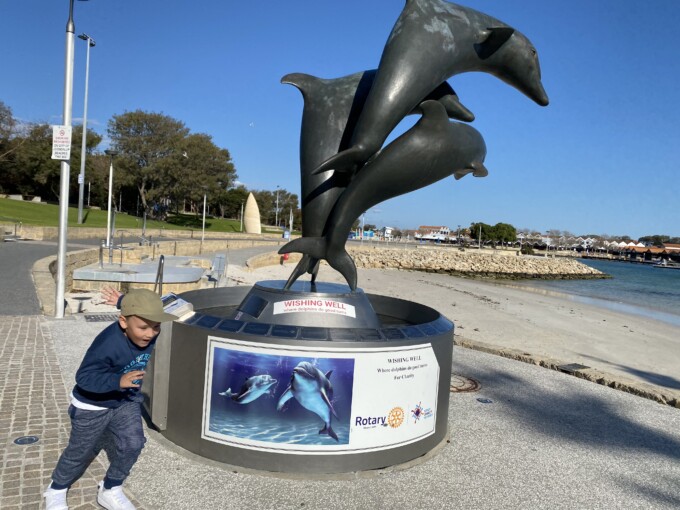 It’s just a necklace, but it made me think about a lot of things.
Australia is a nation of many different ethnic groups, and 1/4 of its people are immigrants, so there are many environments where people can acquire the “cross-cultural understanding” necessary in a global society from an early age, but Japan is a single ethnic group, so the ability to accept “others” is very low. But that is what we need most now.

Everyone is different, and that’s good! That’s the way it should be!
It is not so easy to learn this sense in Japan. 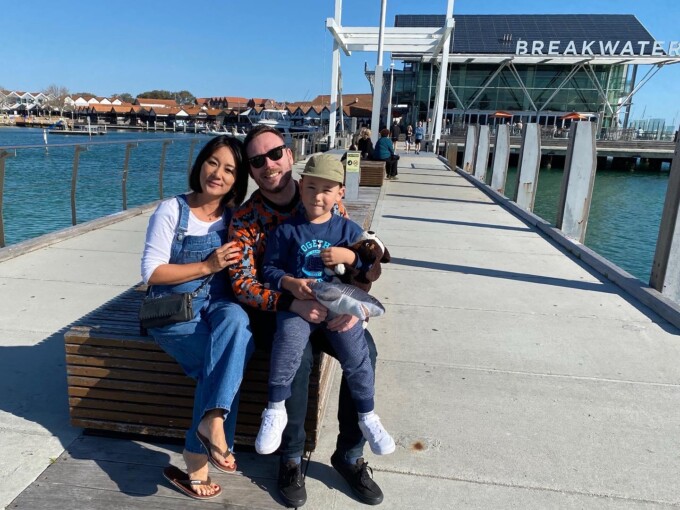 When it was time to go home after having a lot of fun, Eme-chan, who was having lunch with a different friend and watching a movie, joined us again. 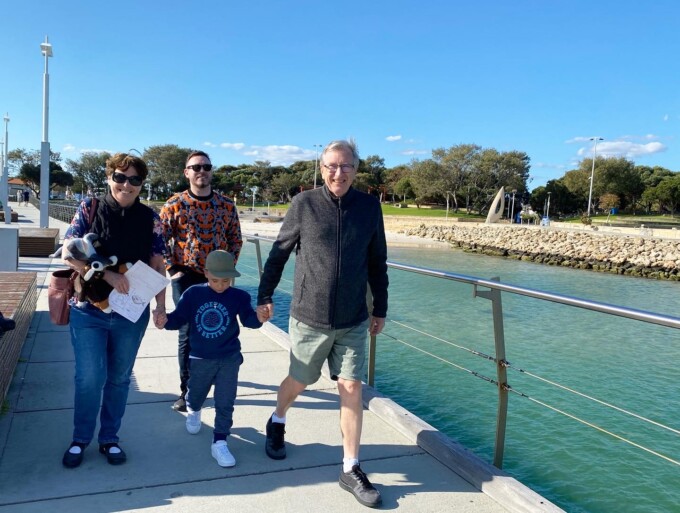 It’s a really nice area (more so in summer), and we took a short walk with the family.
I explained to Fionn about Emmet’s childhood memories of Perth and my first visit here. 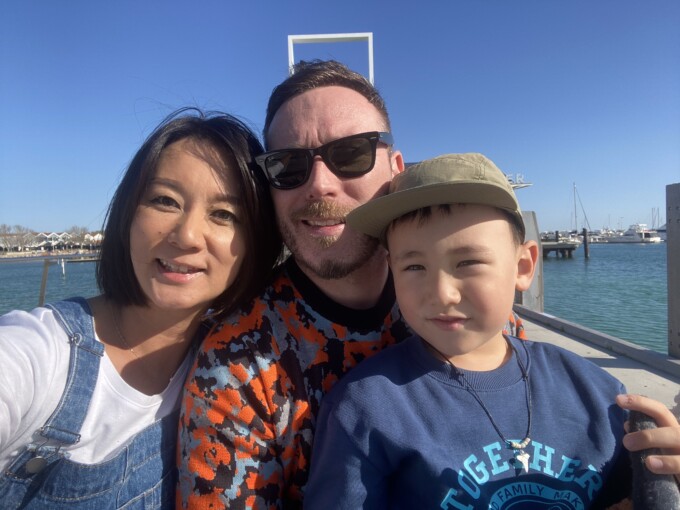 When I first came to Perth, the Butler family took me here for lunch right after the airport. It was also here that I went to my first countdown party in Perth.

I have so many memories.