Continuing on from yesterday, here’s the cooking part!
Half of the dishes were the same as usual, since they requested the same ones I always make!
But the kids and the adults loved it, so I’m really glad I did my best! 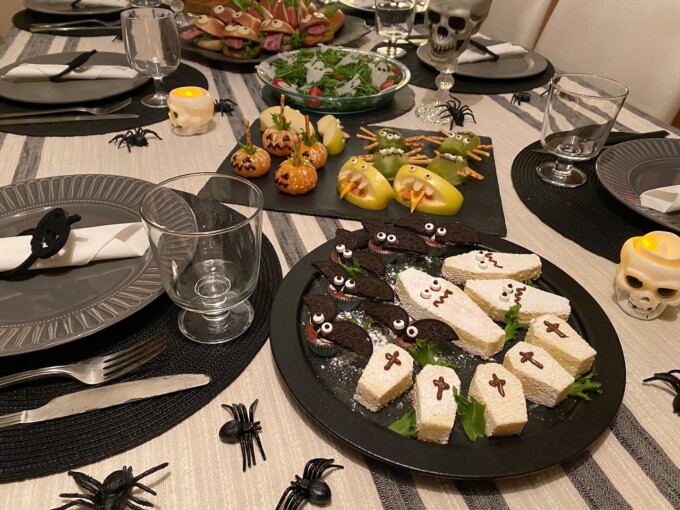 The cake coffin and Oreo bats in the foreground are new!
Both of these took longer than I expected, but once I make them for the first time, I’ll get the hang of it and next year it will be smoother. But I didn’t have time to make the cake, so I just dusted the sponge with powdered sugar. Next year, I will cut the cake properly and put fruit and chocolate inside. 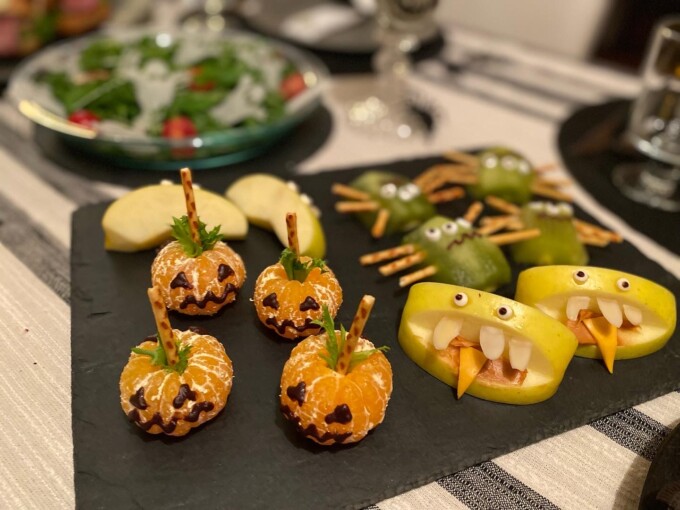 The only new fruit is kiwi ghosts!
I bought two kiwis by accident and they were very ripe, so I thought I’d get a firmer young one next time, but the fruit series is so easy and quick to make and looks so cute, I highly recommend it! 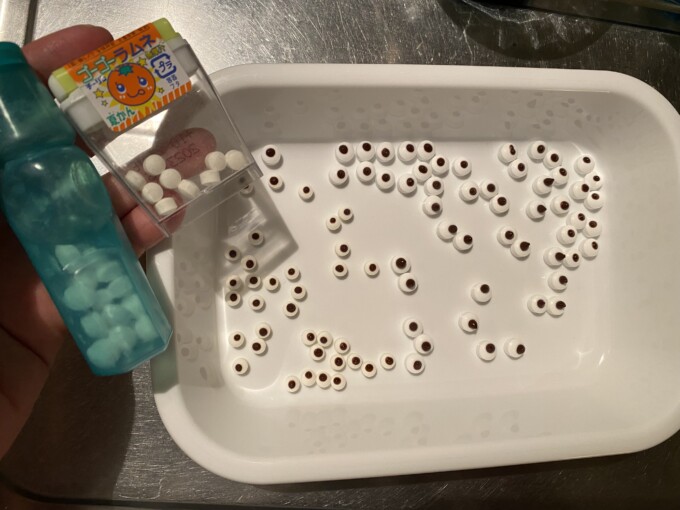 The eyes are just eyeballs drawn on the ramune with a chocolate pen! This is also the first time I’ve tried this, but it’s so easy and quick to make, and it’s convenient, tasty, and usable. 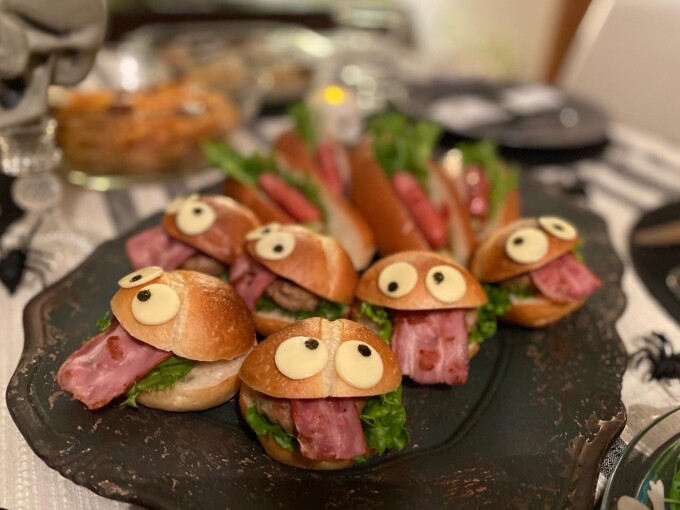 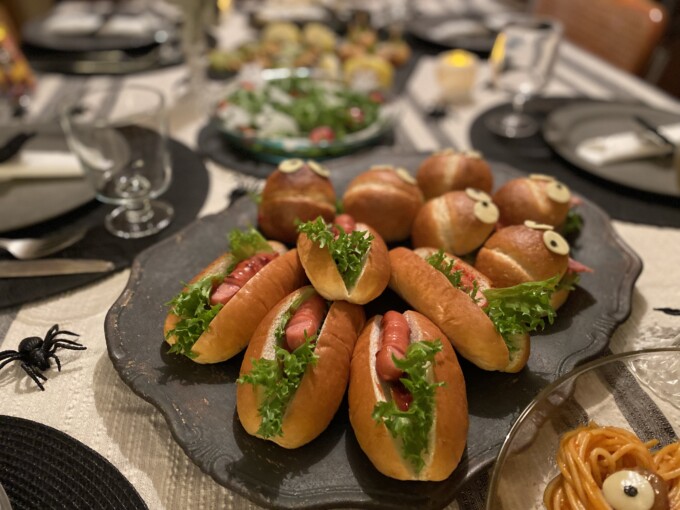 The tongue and cheek hamburger and the hotdog with fingers on it look cute and are so fun to make with the kids that I’ve made them a staple!
The eyes on the hamburger are sliced cheese and the eyeballs are nori! I used a 100-yen nori punch for lunch boxes and condiment lids to cut out the molds. 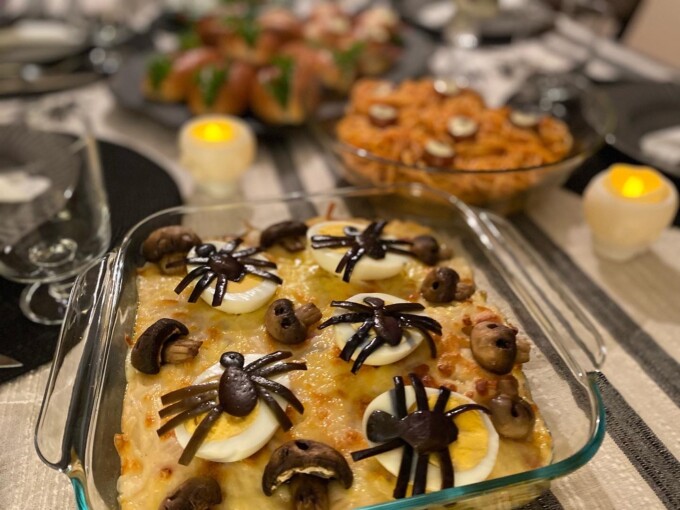 The eggplant spiders that always appear somewhere in the menu were made into a gratin this time!
And here’s the mushroom guycotch that Fionn helped me out with again, which he definitely wanted to make. 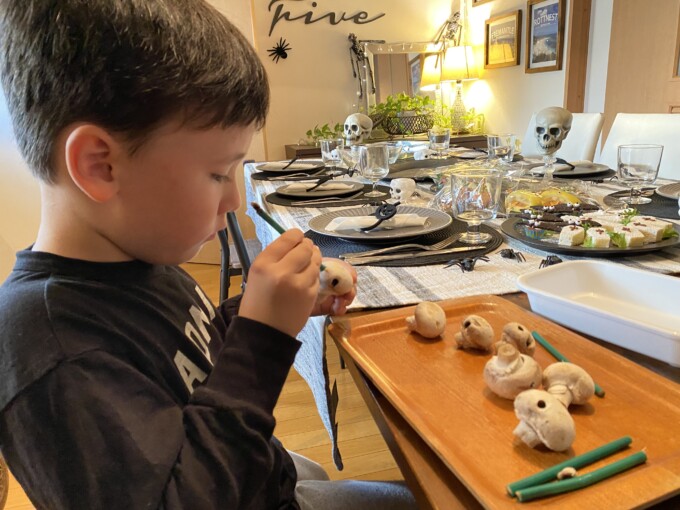 When I was checking out Halloween menus, I found this mushroom gaiquot in a raw salad, which I would have eaten if it had been sliced raw at a restaurant, but I didn’t have the courage to eat raw mushrooms at home, so this time I sauteed them with butter and salt.
That’s why they turned black and shriveled up. 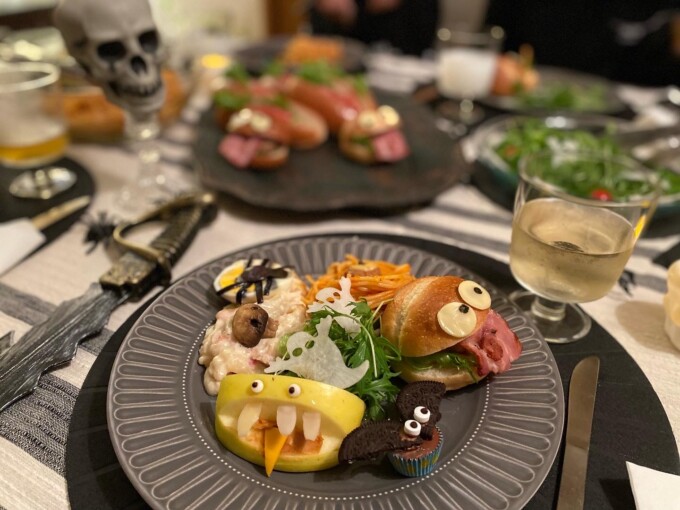 The other dishes were a salad decorated with radish ghosts, which I always make, and garlic tomato pasta with meatball eyeballs. 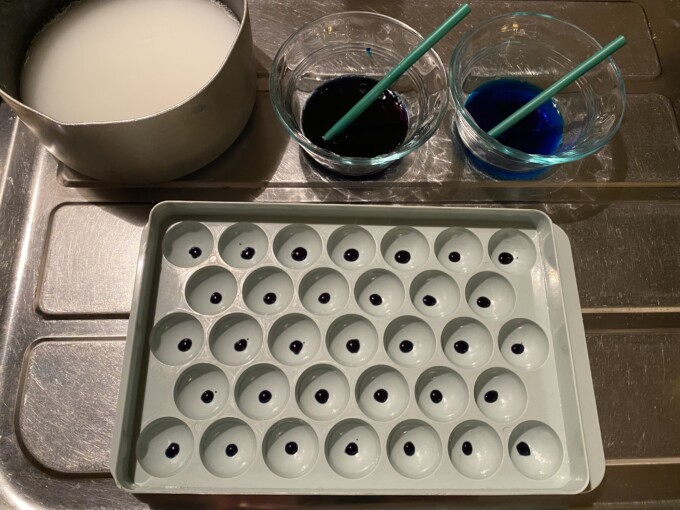 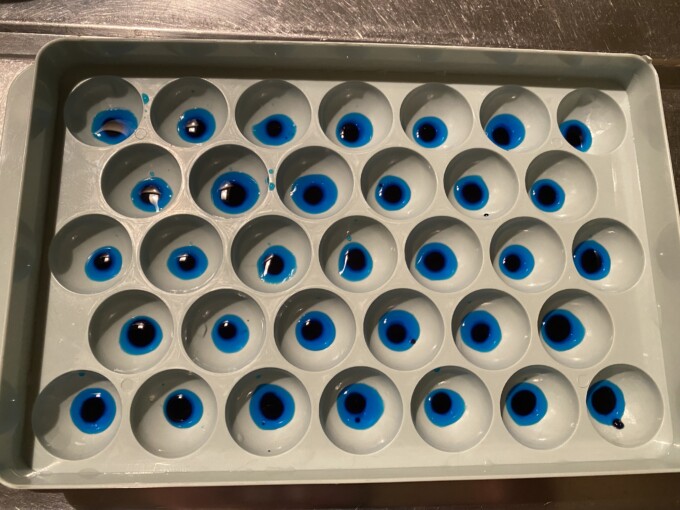 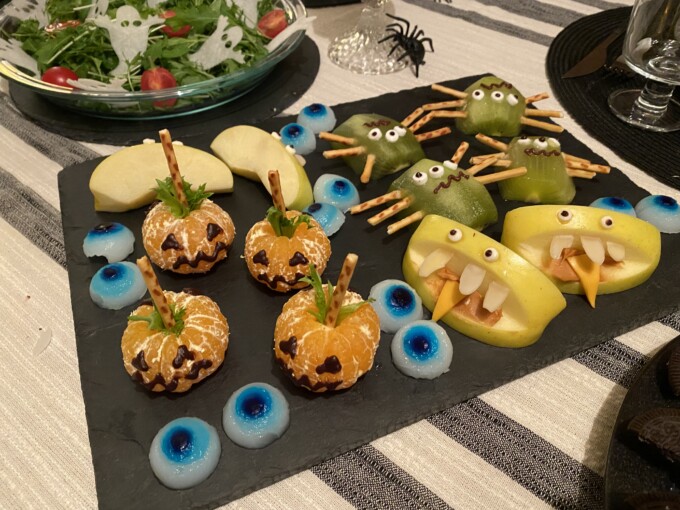 Hey! All the eyeballs are hemispherical, right? ！！！！
Maybe, as it turns out, I didn’t use enough gelatin in the jelly.
Maybe that’s why it was too loose and hard to harden, and it got mixed up and crumbled easily.

Next year, I’ll watch YouTube to get the hang of it and try again. 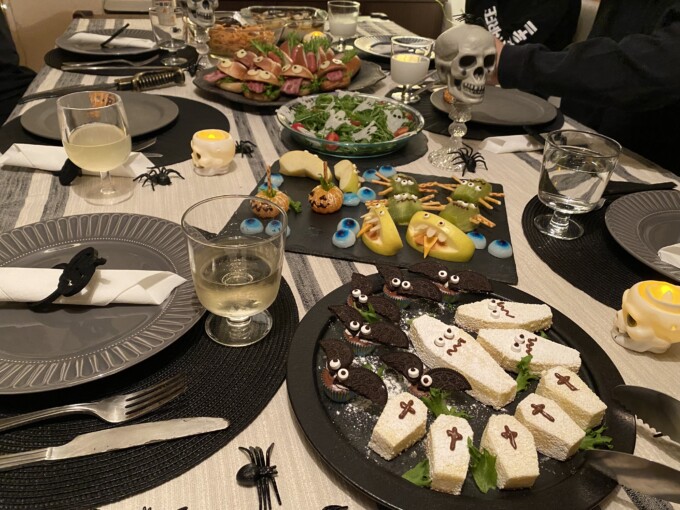 Even if I fail, people can’t see it on social media, so when I upload my work, everyone compliments me so much! I’m honestly very happy about that.
But sometimes people think it was all my idea and say, “You should make a recipe book!” or “Your ideas are great!”.
I’m not! I get ideas from other people’s social networking sites too! 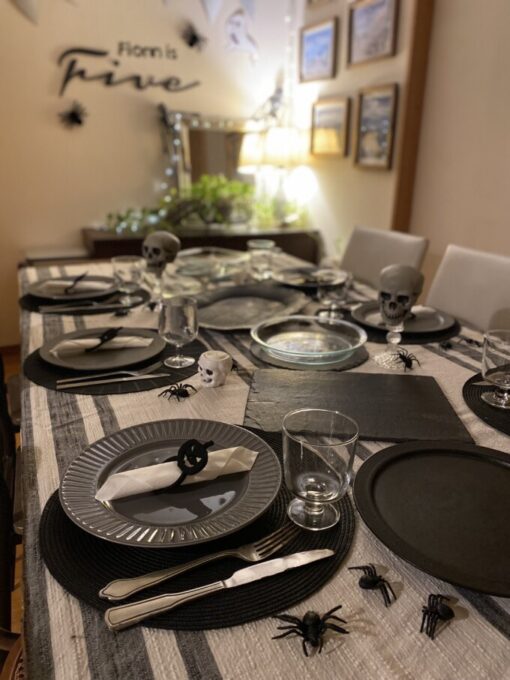 Yes, I do! The new tablecloth I bought didn’t look right until I was about halfway through setting it up, and I thought about quitting, but at the end I put a bunch of spiders as decorations and it made it look like Halloween all at once, and it didn’t stand out because it had been on a dark-colored table before, but this time it really accentuated it. As a result, I was very satisfied with the total result! 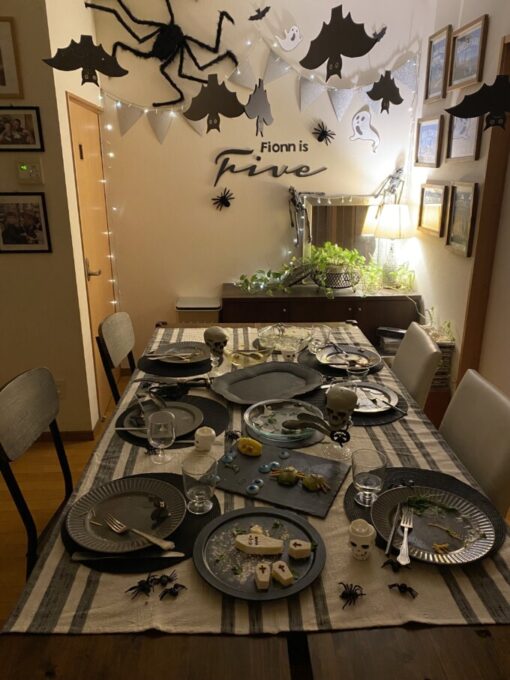 I also liked the atmosphere of the table after everyone had finished eating.
I had been thinking about what to do for a few days, and had been preparing for this event, so I was relieved when it was over.
But Christmas will be here soon if I keep talking like that!

That’s right! I had to order Christmas crackers from Australia.
We’re having a dinner party with friends this Friday, too, so it’s time to start preparing for the next one! I don’t want to make it a job, but I really like this kind of thing!