Emmet, who loves animals much more than humans, and dogs among all the animals.
Influenced by Daddy, Fionn has loved dogs since he was a little little boy, and he has never left his best friend and family member, Taro. 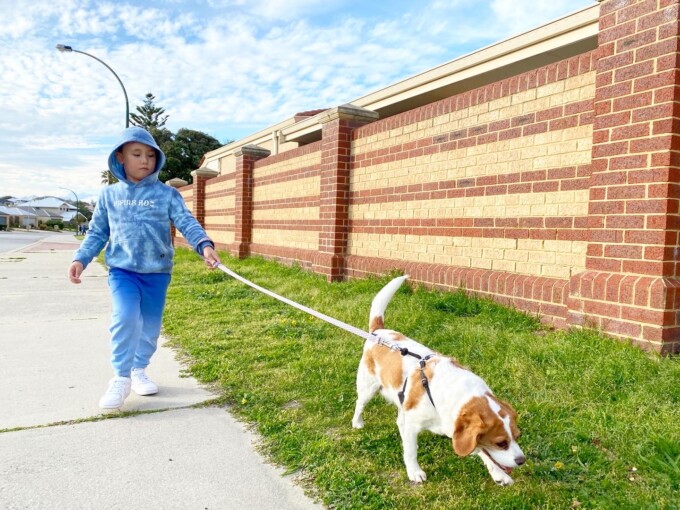 In Fionn’s mind, Bella, the smaller of the two dogs, has the cutest eyes, and Emmy, the larger of the two, is the coolest looking dog.
Emmy, the bigger one, and is the cool older sister. 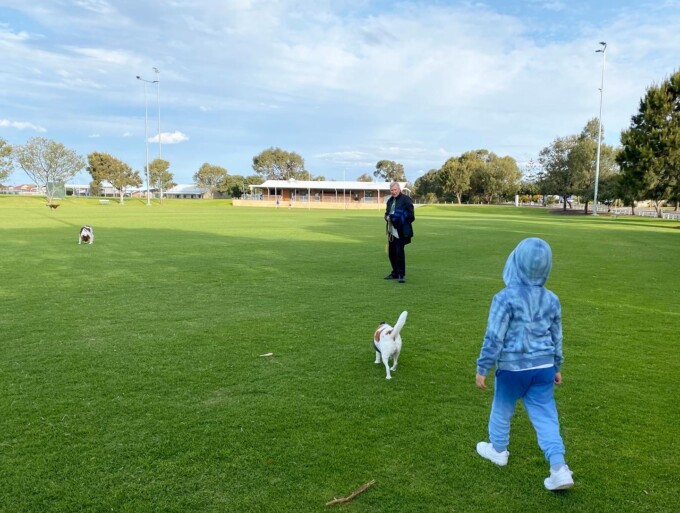 Fionn had a goal to achieve when he went for a walk with Grandad that day.
The goal was to train the dogs to pick up the stick he threw and bring it to him. 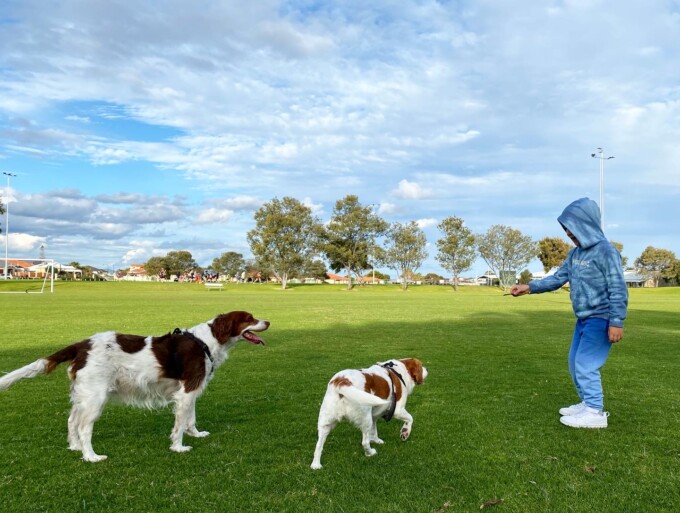 Grandad told him that neither one of them is interested in picking up a thrown stick, so they would never do it. But Fionn said, “I’ll train them!” 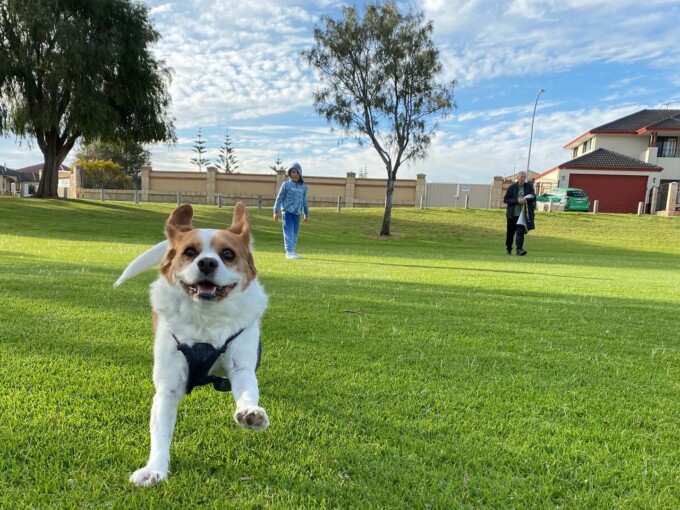 He tried it and, surprise! Bella started chasing after it and picking it up! LOL!
Bella probably thought it was bait or something, but Fionn was overjoyed to see that his training had succeeded.

He was told by Grandad, “Fionn, you made it three times! That’s great!” Fionn said, “It was 4 times!” He proudly said back. It was so cute. 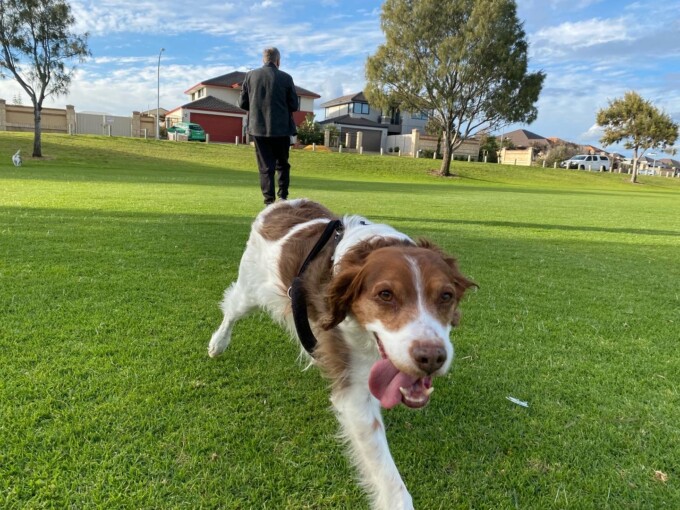 Like this place, there are really large, well-maintained grounds all over the place.
Kids use them for soccer practice, neighbors use them to walk their dogs, etc.
It’s a great place for everyone to use as they please.
I think the number of playgrounds and these large grounds and how clean they are is really great!
I mean, everywhere in Perth is really well maintained and clean. 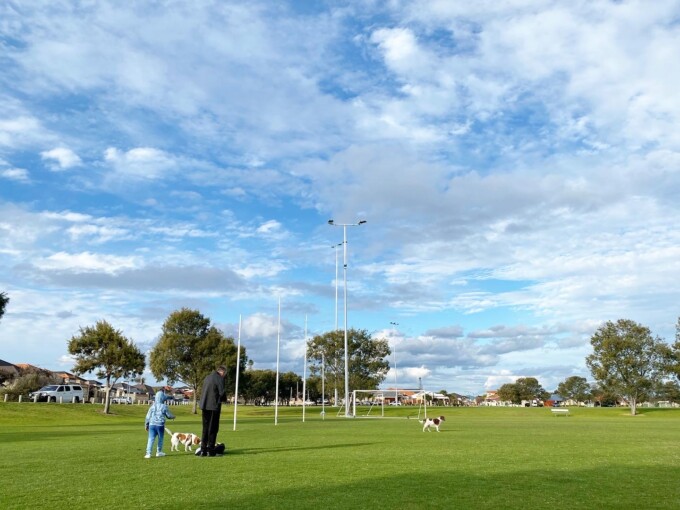 Also, after coming back to Japan, I felt that there are no mountains around Perth.
I think this kind of scenery looks more spectacular in Perth.
In Kochi, you can see mountains somewhere, so the scenery looks different. 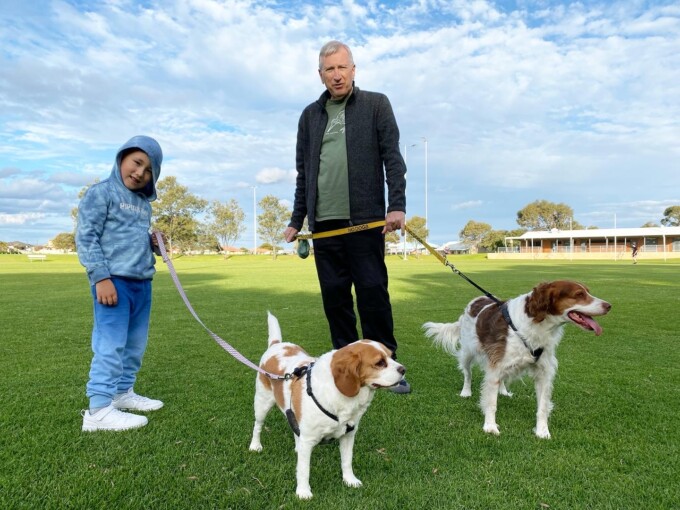 I tried to take a picture of grandpa, Fionn and the dogs, but of course the dogs didn’t look at me.
But it’s a very nice picture, isn’t it? I love this picture, and Grandad is very handsome too. 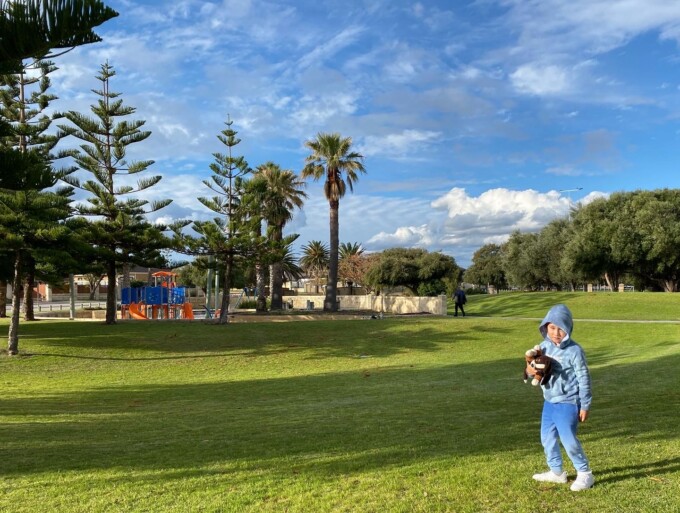 We can’t get a doggy yet because we don’t have a home of our own, but I hope to get a doggy for Fionn, who is an only child.
In Perth, Fionn was running around the house and yard chasing the dogs, and if he didn’t see one of them, he would call out loudly to look for them.

It’s great to have a pet in your life, isn’t it!