This is probably the third year in a row that we come here for a picnic during Silver Week.
It’s a beautiful spot with a view of the ocean, but no one is around.

I have seen it occasionally nowadays, but I guess people in the countryside don’t have the custom of having picnics.
Maybe the beauty and wonder of nature is so close to them that they take it for granted and don’t think much about doing something there! 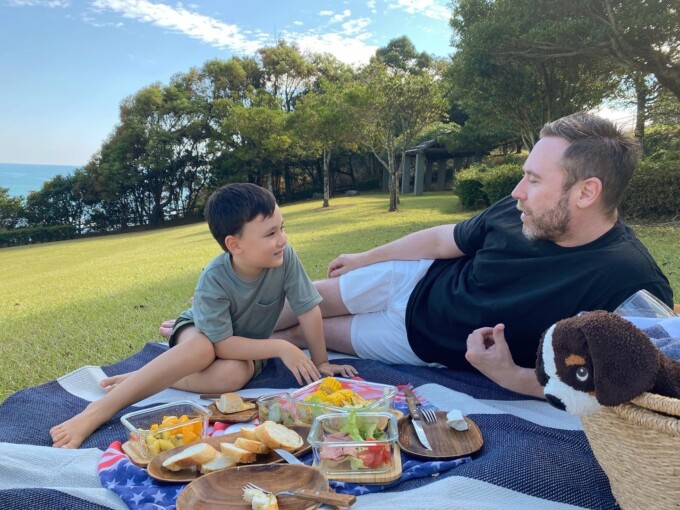 It’s the same with beaches and rivers. People take their children to these places because kids want to go, but I don’t think many parents enjoy them with their children.
It’s a shame, because this area is really a treasure trove of beautiful and wonderful nature! 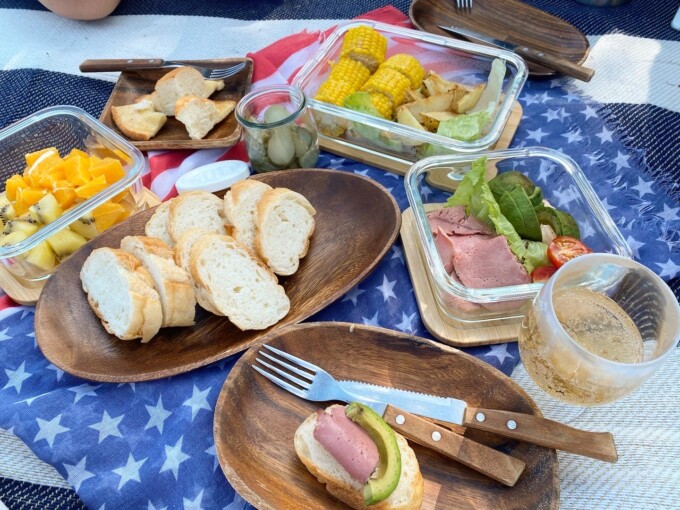 Today’s lunch was the same as usual, with some things we had at home plus some things we bought for the picnic.
I knew the weather was going to be nice, so yesterday I bought some bread and ham when I went shopping!
So I almost just cut it up! It’s nice to have something that you can prepare in 10 minutes before you leave the house. 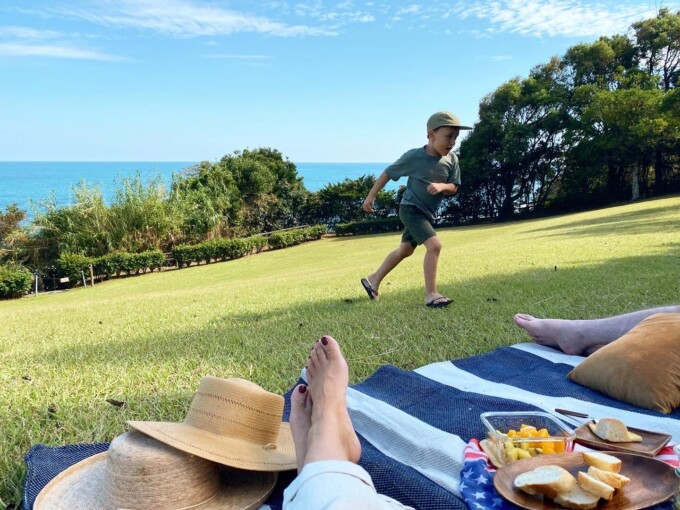 It’s important to take a 5 year old with so much power outside because if you stay at home, he’ll want to play video games or look at his iPad the whole time.
If he’s outside, let’s play tag! Let’s play hide-and-seek! He will always be moving.
We can’t help but get tired of playing with him, but everyone tells us that we won’t get to play together like this for a few more years, so we cherish the precious time we have. 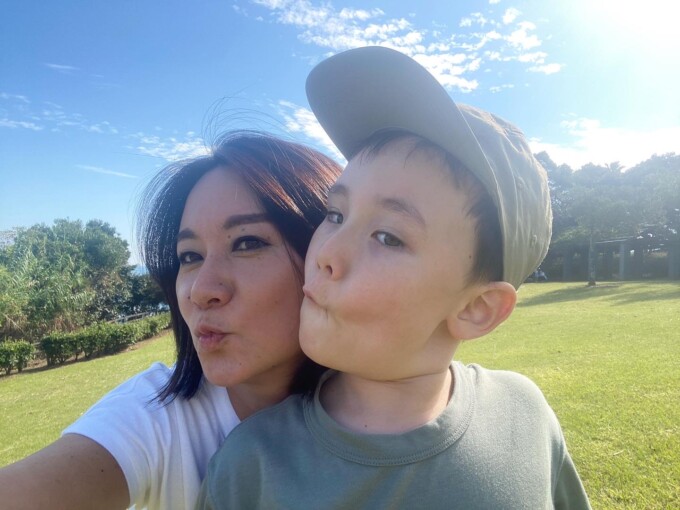 He dosen’t look like 5 years old because of his size, but inside he is 5 years old and speaks two languages, so he probably has a smaller vocabulary than a 5 year old should.
Lately, he’s been talking about his thoughts, his imagination, what he knows, what he’s curious about, and so on, all the time.
And for some reason, the volume of his voice is loud…
But his childish discoveries and imaginations are cute and interesting, and the words he uses to explain them are sometimes slightly wrong or unique, which is a good stimulus for us who are listening. 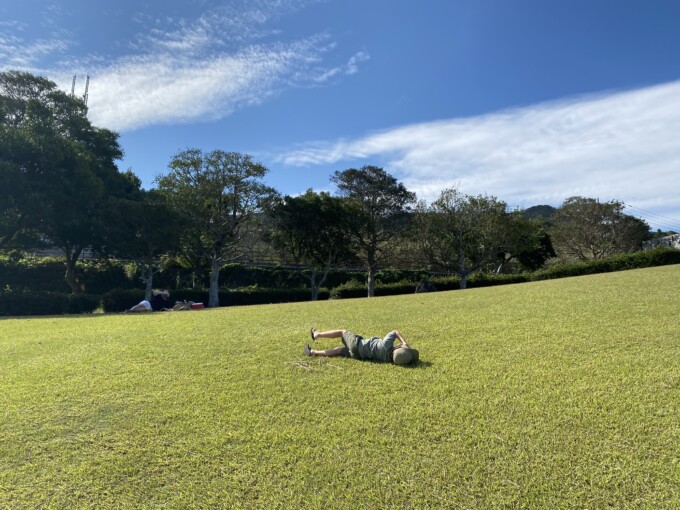 He rolls around on the slopes, chases birds even though he can never catch them, and so on.
It makes me very happy to see him playing and having fun with nature. 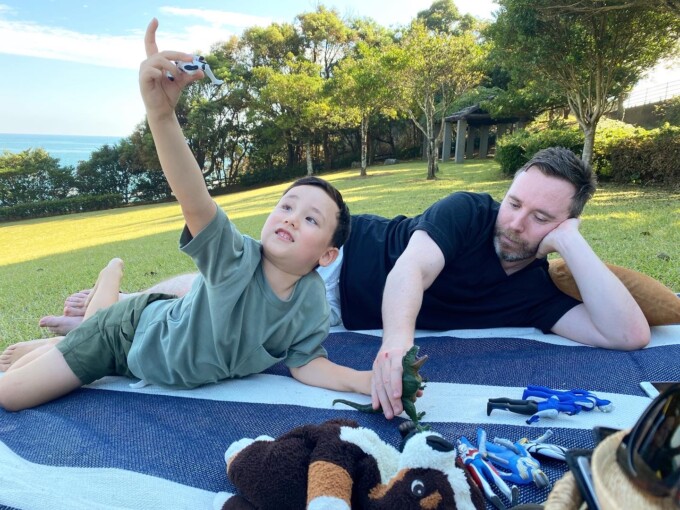 In the second half of the day, Fionn played with the dinosaur we brought, Emmet listened to music, and I read books.
It was so hot in the sun that we were sweating in an instant (it was over 30 degrees Celsius), but in the shade, there was a nice breeze, so it was pleasant and comfortable.

It’s too hot to have a picnic in the summer, so I hope to go a few more times this year while it’s still comfortable in the fall. 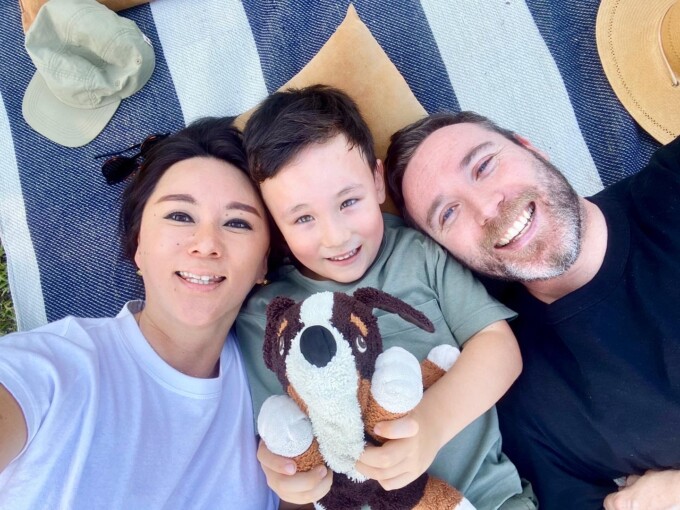 On the way home, Fionn was so tired that he fell asleep, and Emmet and I talked about how happy we were while looking at his cute sleeping face.

We had a leisurely picnic, Fionn and Emmet danced to the music we were playing, and everyone laughed at that.
It’s something we do casually all the time, but recently I’ve had the opportunity to see and hear about many different forms of married couples, so it made me think about it even more.