Yesterday was Fionn’s first time participating in a sumo tournament with a silk spider!
It’s been three years since the event was held because of corona, and my niece actually won three years ago! Isn’t that great?! 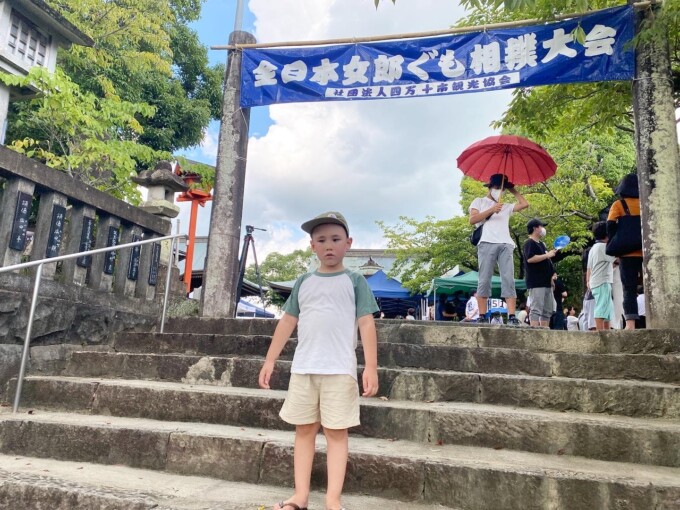 When you think of the silk spider, you think of the one with the yellow and black stripes.
But it seems that what we think of is usually called a wolf spider!
That’s why the spiders that everyone is bringing to this competition are also called “wolf spiders”. 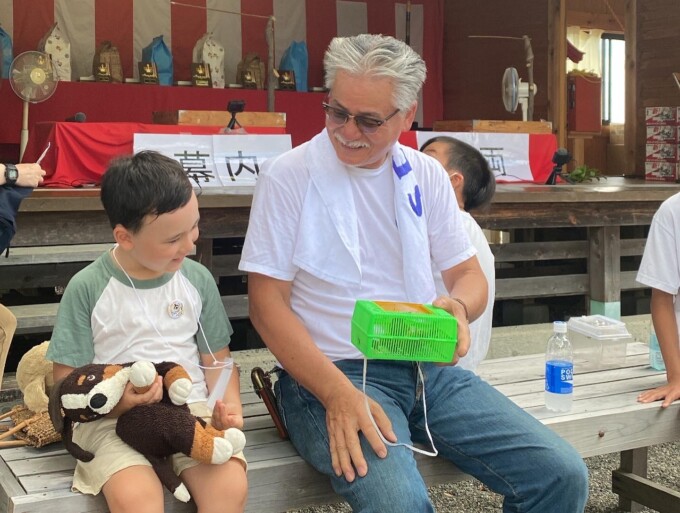 This time, Fionn and I couldn’t find any spiders, so we entered the competition with a spider Yuki-chan found for us!
They divide the spiders into makuuchi and juryo, depending on their size, but Yuki-chan’s spider was big enough to be in makuuchi! 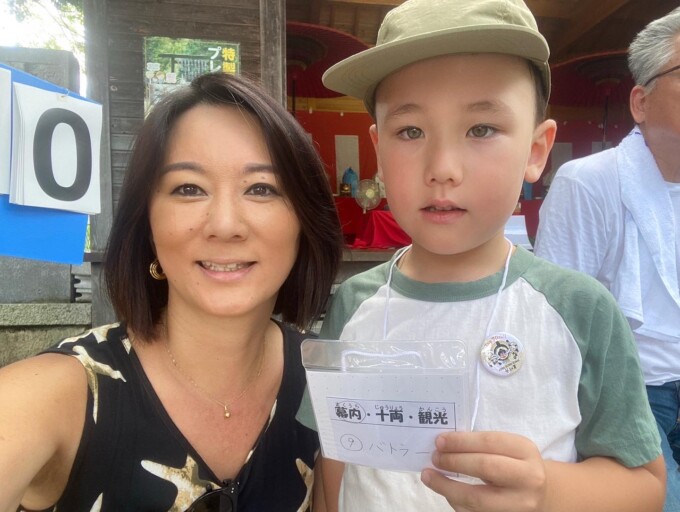 This year’s event was the 70th, so does that mean it has been going on for over 70 years? I looked it up.
It seems that the game originated in 1468 (Onin 2), when the maidens of Ichijo Kyobo came from Kyoto to take refuge from the Onin War.
The tournament may be 70 years old, but it has a very long history! 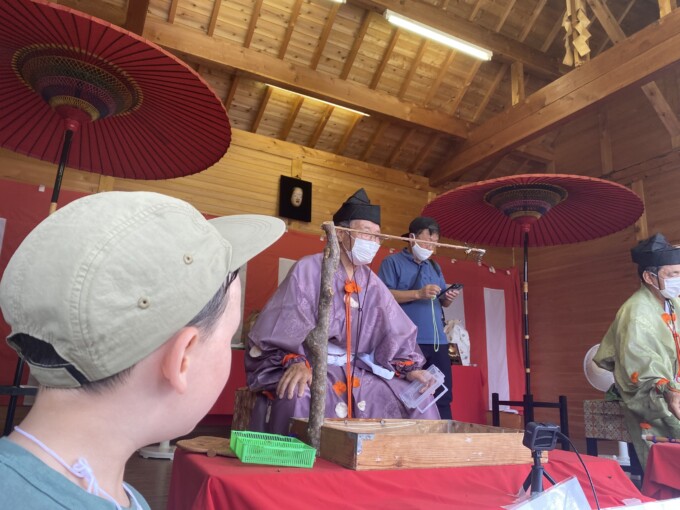 Now, the tournament begins! The group in the curtain with Fionn had to win 5 times to win the tournament.
So there were about 32 people in that group.

They put them on a stick like this and make them fight, but they fought more than I expected!
And if they were dropped and ended up in the water below, they lose. Or if the spider climbs back up just in time the other spider cuts the threads from above, they again fall in the water and lose. 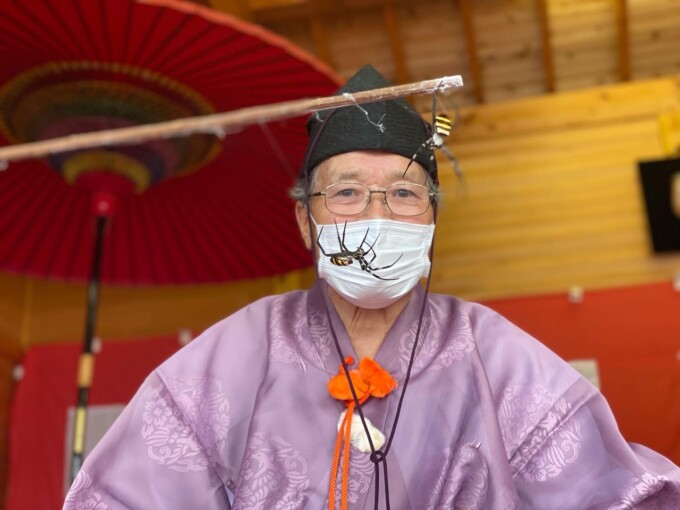 Fionn fought with Yukichan`s spider and made it through the first round! His nephew lost in the first round and his niece lost in the second round.
So, Fionn made it through the second round as well, and next was the quarterfinal, the third round!
The result was that they fought really well but Fionn lost, but it was so much fun and amazing!
Even the adults got into the game and cheered for the winners, and it was great that everyone, regardless of age, could get involved. 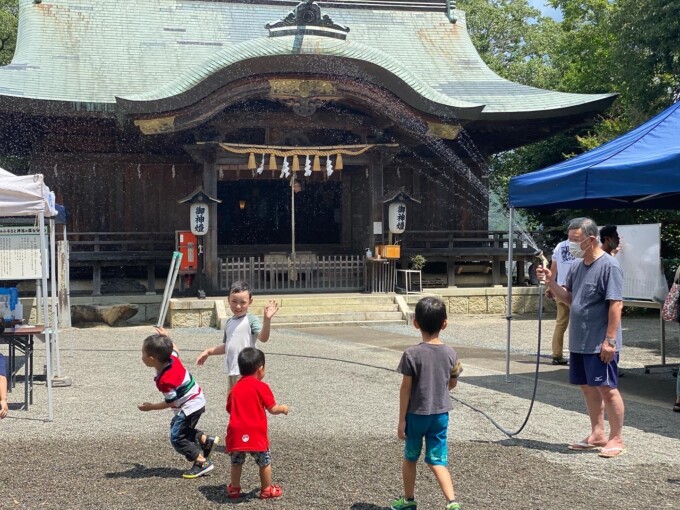 It was a very hot day, so they sprinkled water on the ground and the kids played in the showers.
It was a very peaceful scene, and it made me feel very relaxed. 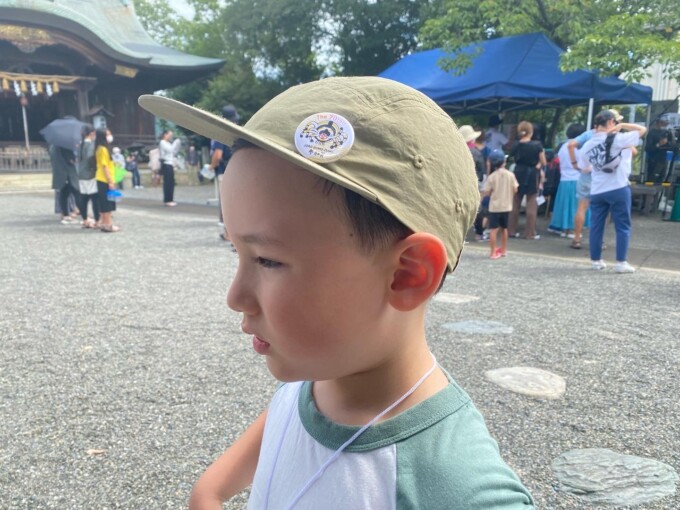 Fionn saw the assortment of candy that the winners would get, so he really wanted to win!
He was a little teary-eyed on the way home. But that’s the kind of feeling that really counts!
It would be even better if we could think about what we can do to win again next year and take action. 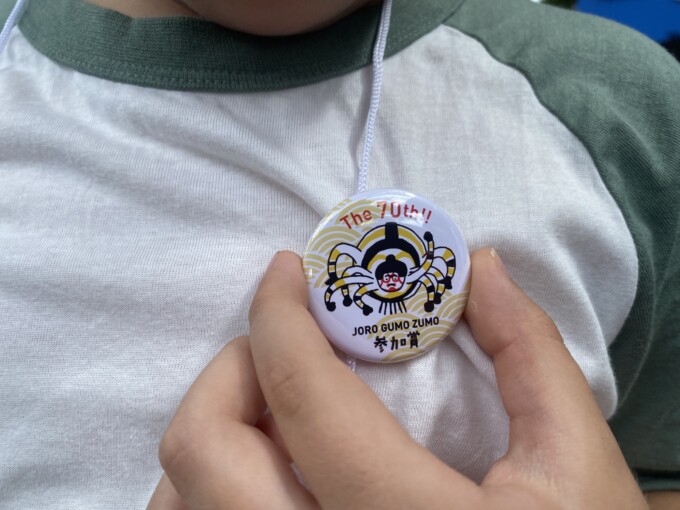 This JORO GUMO ZUMO badge, which everyone received as a participation prize, was made by my cousin Mitsuka.
I love the cute illustration of the spider! 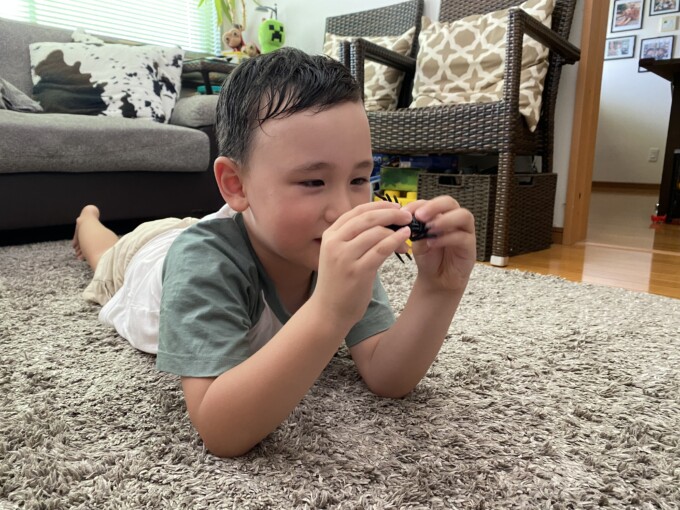 Eme-chan, who hates spiders the most in the world, of course, couldn’t watch, so he couldn’t come.
When Fionn went home, he brought out the spiders from the Halloween decorations and explained to Daddy what they looked like.

This will definitely happen again next year!
I hope we can keep this fun culture with such a long history.