Monday morning turned out to be a beautiful day, just as the weather forecast predicted!
The sun was shining even though it was already October, and it felt like a super lingering summer heat rather than the cool autumn weather I had expected. 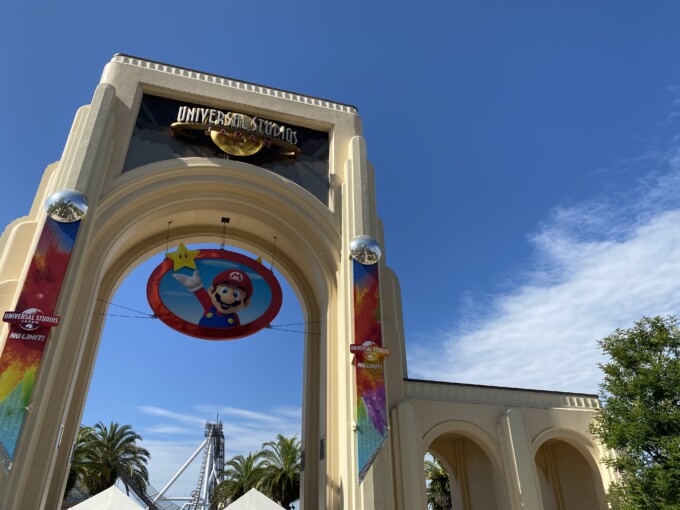 The day before, Fionn had excitedly said, “One more sleep and we’re off to USJ!” When Fionn arrived at the park, he said, “I’m here again!
He was also showing that he had been to USJ before. 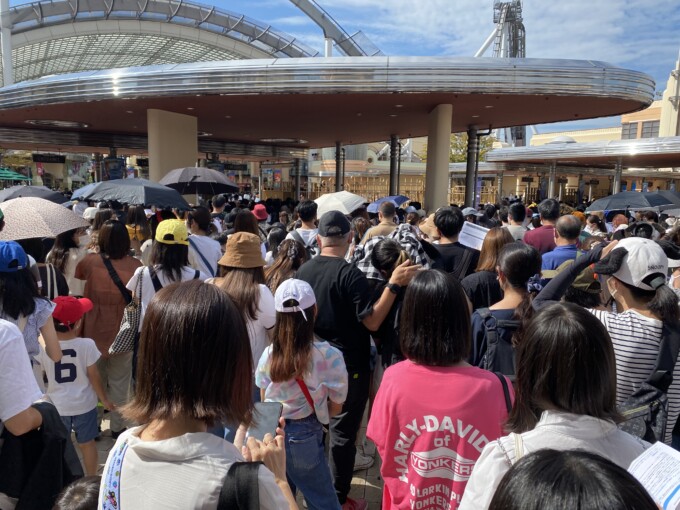 And do you know where we are? There were many, many people ahead of us at this point before entering the park!
The last time I was here was also on a Monday, a weekday, so there weren’t that many people and it was easy to enter the park.
This time it took me more than 30 minutes just to get in！！！ 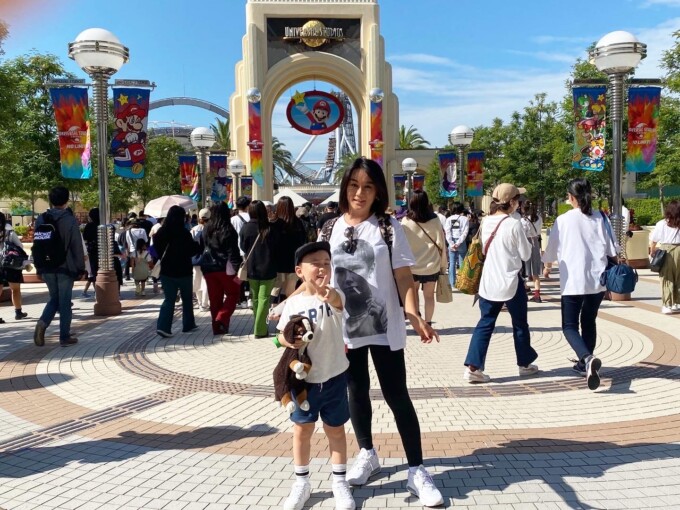 I found out the reason later, but it seems that there was a sports day at many schools on the previous Sunday, and yesterday was a substitute day off, so there were many children with their families.
Also, October is the busiest month of the year because of Halloween.
Completely unexpected! 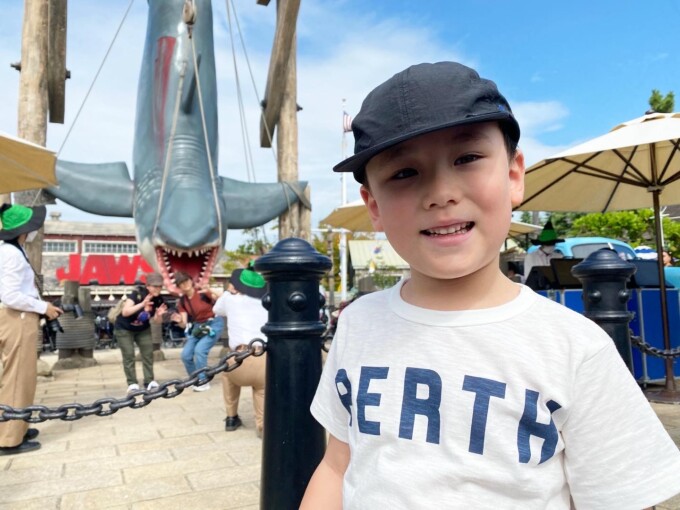 We first went to Jaws, which had the shortest wait time of them all! We waited 50 minutes here. 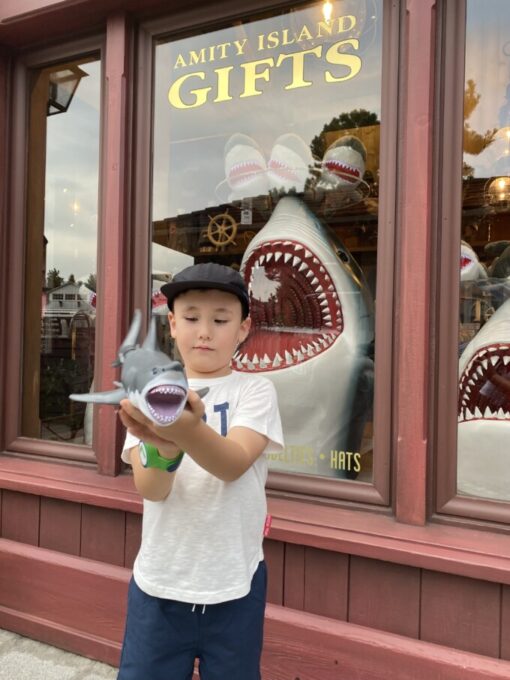 He was tempted by the store at the end of the attraction.
He was so happy to get the shark that he really wanted. 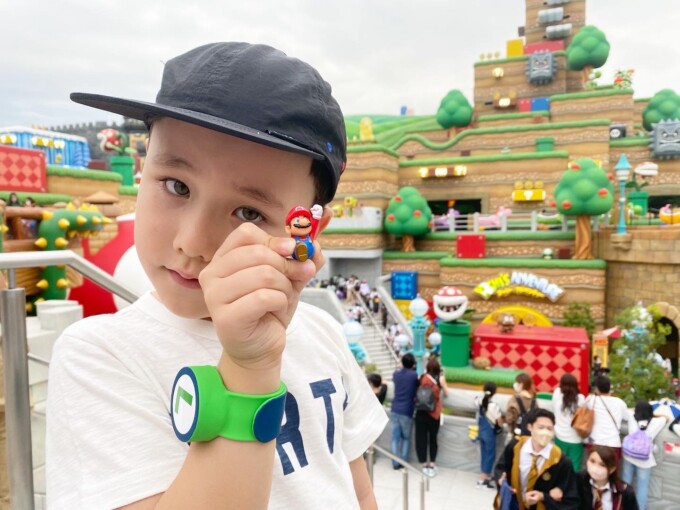 After that, we went to Nintendo World, where Mario Kart was the attraction, he wanted to ride the most.
It was a very busy here, so they had stopped giving out numbered admission tickets and we had to get lottery tickets!
It’s already a lot of work! 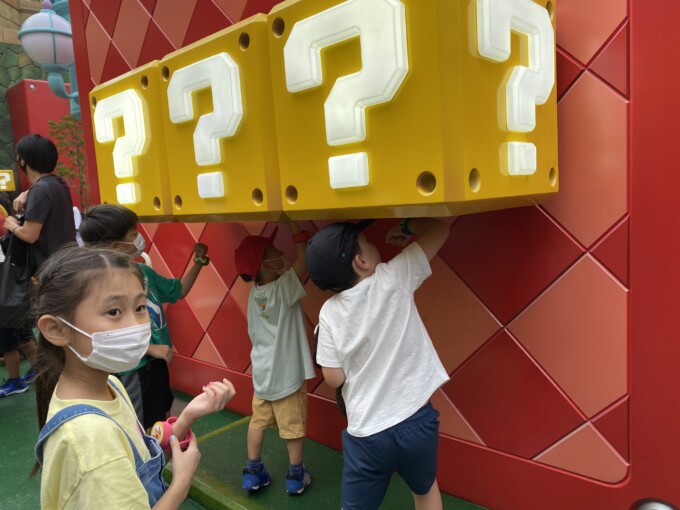 But since we could get in, he collected all kinds of coins and stuff with the power-up bands he had bought before! 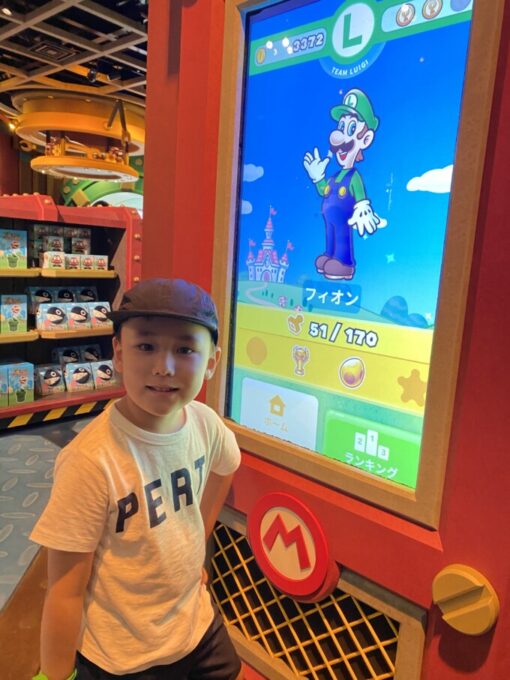 It’s fun to be able to see information about the current collection of points in various places like this. 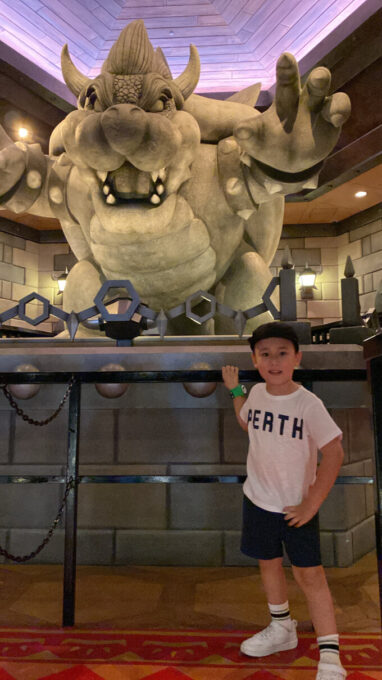 Mario Kart, which he was looking forward to the most! I did my best to make it through the 110 minute wait!
110 minutes alone with my 5 year old (his cousins were not interested in this part of the park) is a tough 110 minutes.
I don’t know how many times I had to hold him in my arms because his legs hurt from standing all the time after walking around all the time….
By the way, Fionn is not just 5 years old! He weighs 27 kilograms, which is heavier than the average weight of a 9 year old girl!

But he seemed to be really happy and enjoyed the attractions, so that’s a relief.
Right after the ride was over, he said, “Mommy, I’m going to wait again, so let’s go on another ride!”
I begged him to forgive me as I couldn’t do it all over again. So. he gave up. If I had waited in line one more time, my arm would have been torn off!! 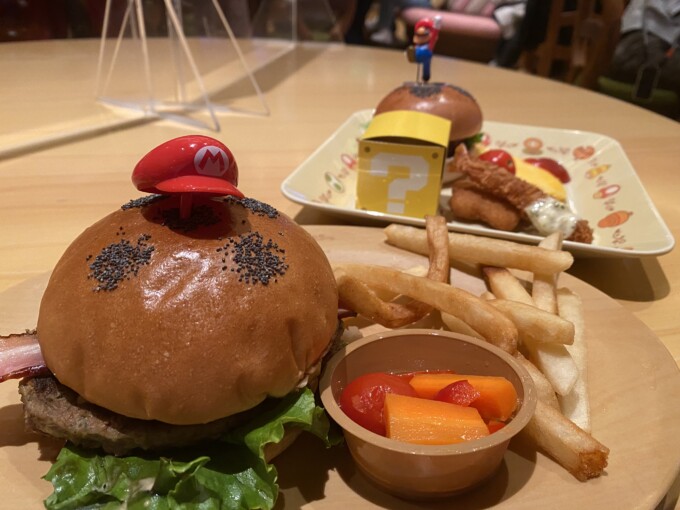 After that, we waited 40 minutes to get into Kinopio Cafe because he insisted on going in.
After waiting and waiting, we ordered a hamburger set for 2,300 yen (not including a drink!). 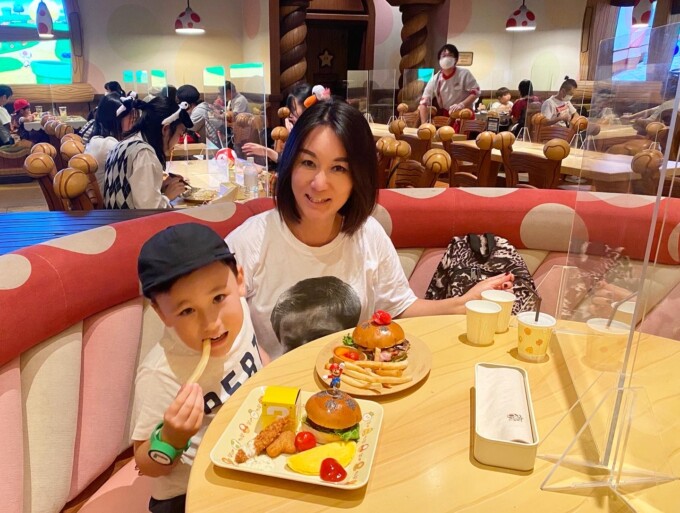 But even here, he happily ate the burger, saying, “Delicious, delicious, delicious! He was so happy to eat it, and he even took the Mario on top of the hamburger home with him to play with. I regret that I said to myself, “That’s too expensive! As it was worth it for Fionn. 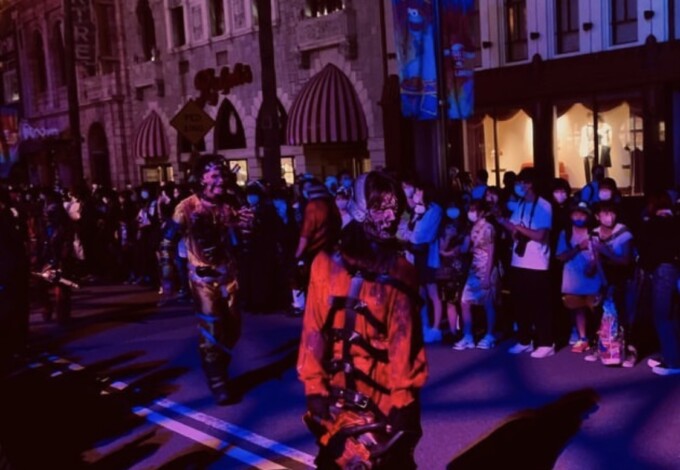 The daytime was such a fun time, but at night, the Halloween mode was suddenly in full swing.
Of course, for adults, zombies are nothing scary, but for a 5-year-old, even if he knows it’s a lie, it’s still scary! 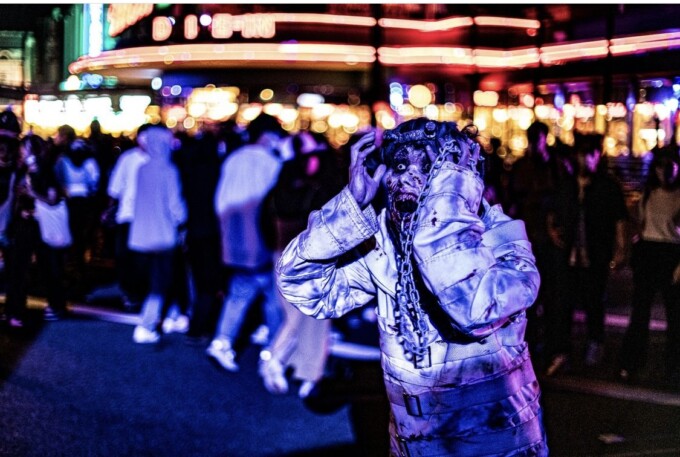 Of course, the zombies in their perfect make-up and costumes kept coming closer and closer!
Fionn was screaming and crying as he ran away. 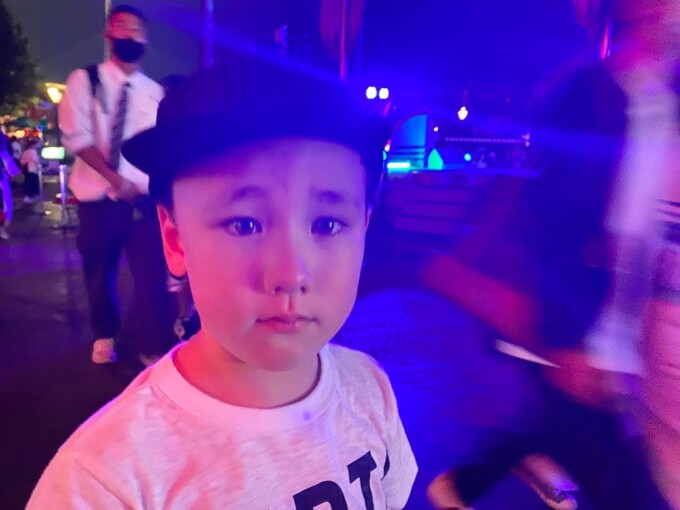 Here I am again, carrying 27 kilos! LOL!
I tried my best to keep Fionn away from the zombies, but they were everywhere. 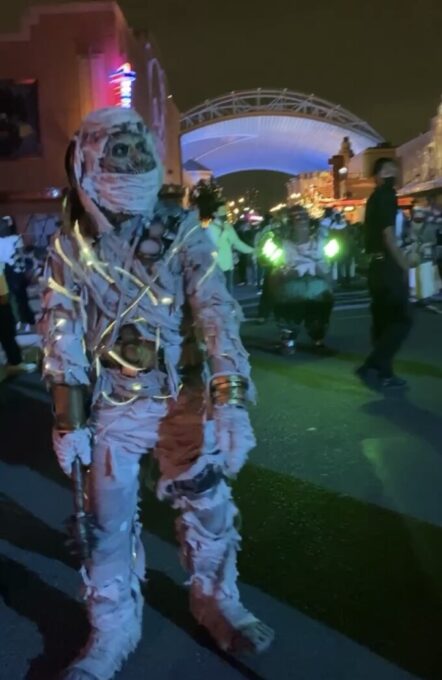 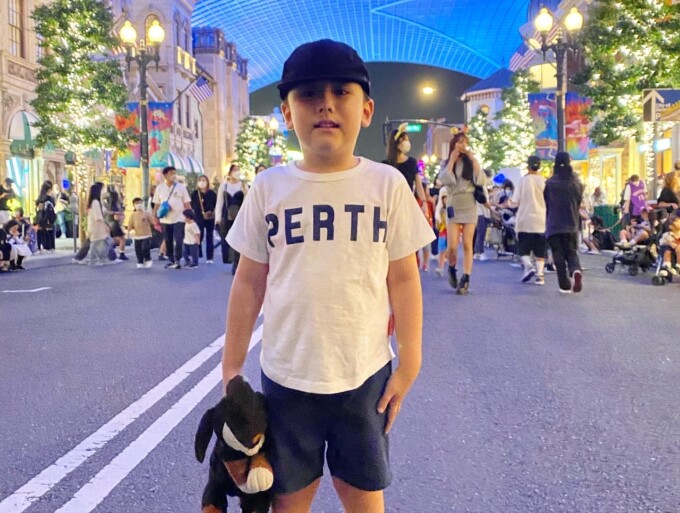 But we still managed to get on the Minions Ride, which had a slightly reduced wait time (but still 50 minutes), and the Minions Ice Ride.
We rode the Minions Ice ride, joked around with the cousins during the wait, and everyone seemed to enjoy themselves until the park closed!

My feet were so stiff and sore before I went to bed that I couldn’t sleep because the soles of my feet were so tingly.
But the kids really seemed to be having fun, so I’m glad they did. That alone makes a parent happy, doesn’t it?