Fireworks at the beach

On Monday nights, Emmet usually has karate practice and a high school English conversation class.
But since karate is closed for the Obon holiday and the high school class was cancelled, we decided to go to Kuroshio-cho to see the fireworks! 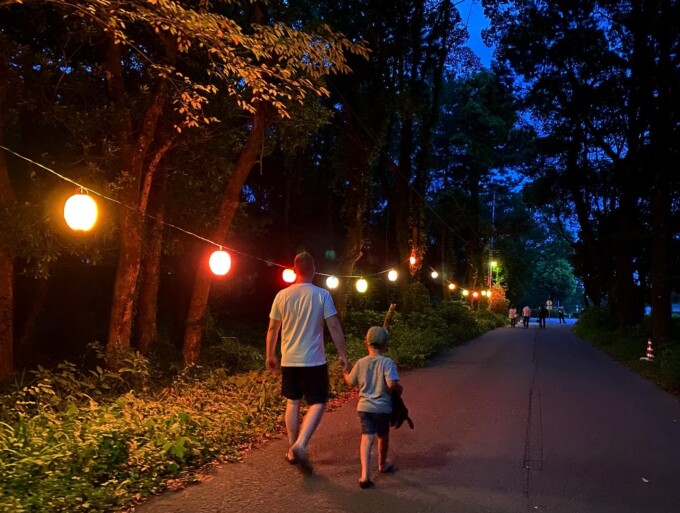 We always go to Shimanto City fireworks every year, but as usual the fireworks are held on the last week of August.
I was thinking it would be a pity that I would be in Australia this year so I couldn’t see the fireworks, so we were super lucky! 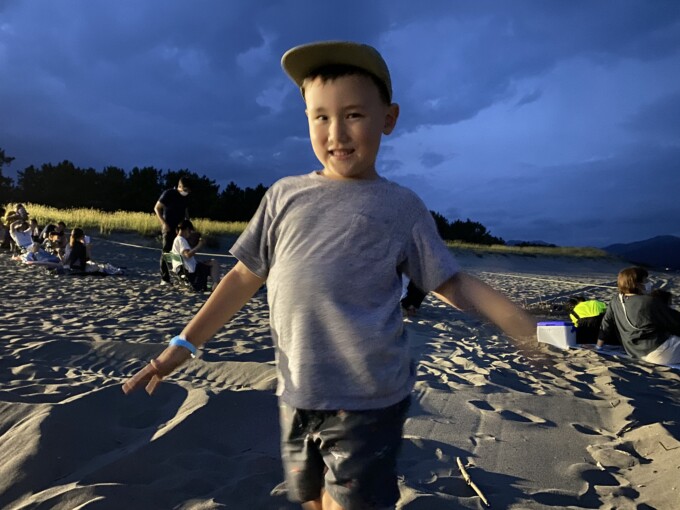 At first Fionn said he didn’t want to get sand on his feet, but within 5 minutes he was playing in the sand.
It was night-time, but it wasn’t cool and we were sweating, so all the sand stuck to the sweat on his body! 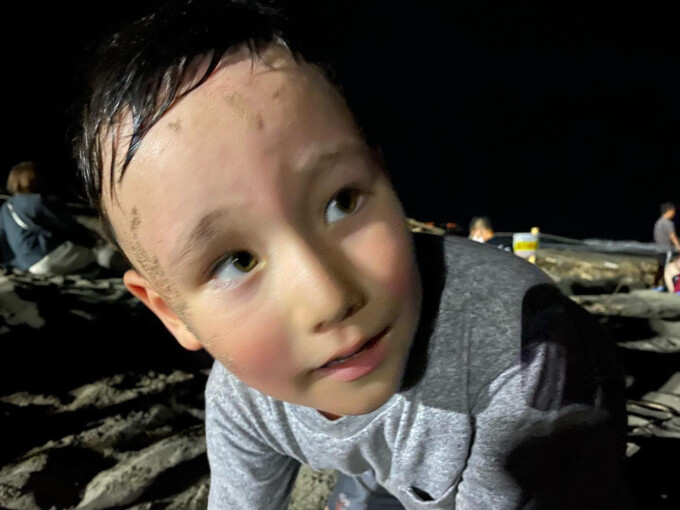 It was like this.
Sand all over his clothes and even in his pants. ！！！！ 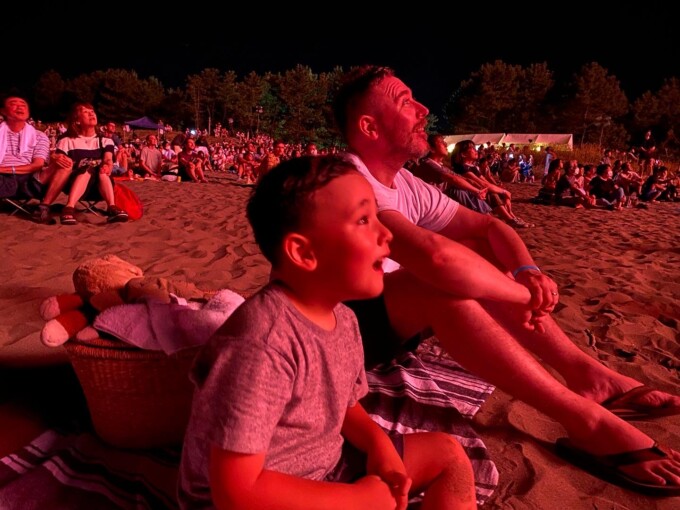 But when the fireworks started, he was so impressed.
Kids are so cute because they actually speak their minds more than adults. 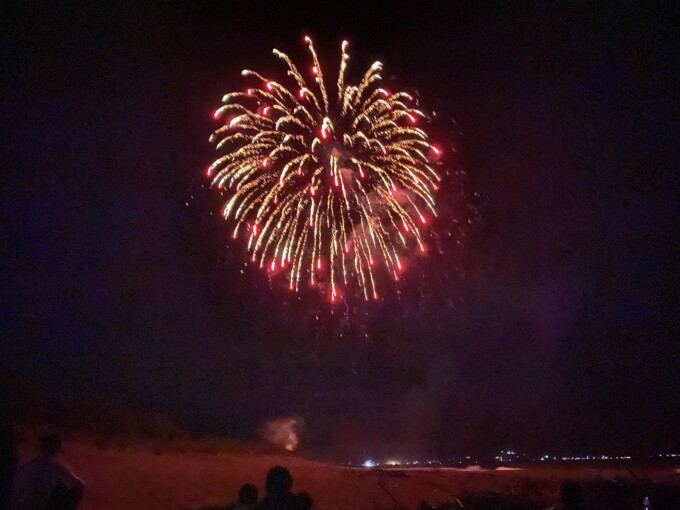 I took a lot of beautiful videos, but the pictures don’t do it justice….
In fact, there were a lot of stars in the night sky where the fireworks were going off. Fionn said, “No music?” (because the Shimanto fireworks usually play music).
But the background music here is the sound of the waves. That’s nice, isn’t it? 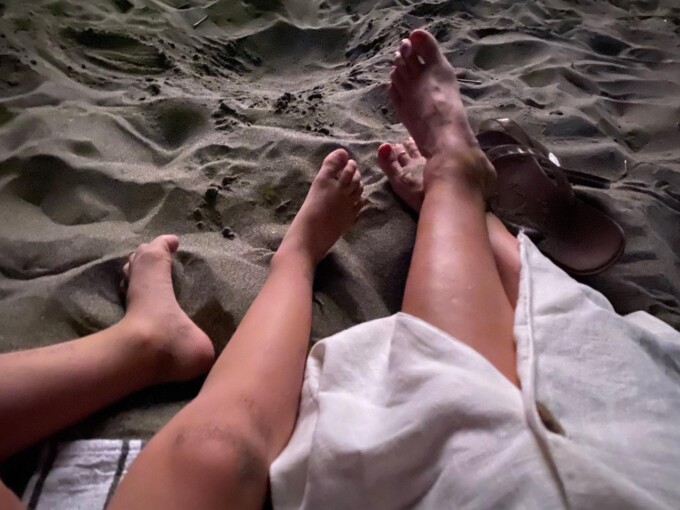 He was enjoying the beautiful fireworks for a while.
After about 15 minutes, he got bored and went back to playing in the sand at night. That’s how it is with 5 year olds. 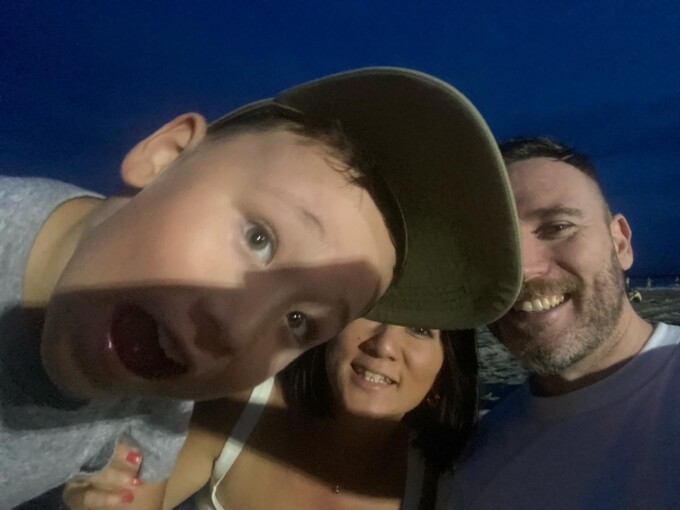 Emmet said, “It’s a kind of a waste to have fireworks on a Monday!”
It’s always been decided that these fireworks are on August 15. I’ve also never been here as a child.
The fireworks in Mihara Village, where my grandparents lived, were held on August 15 every year, so I always went there. 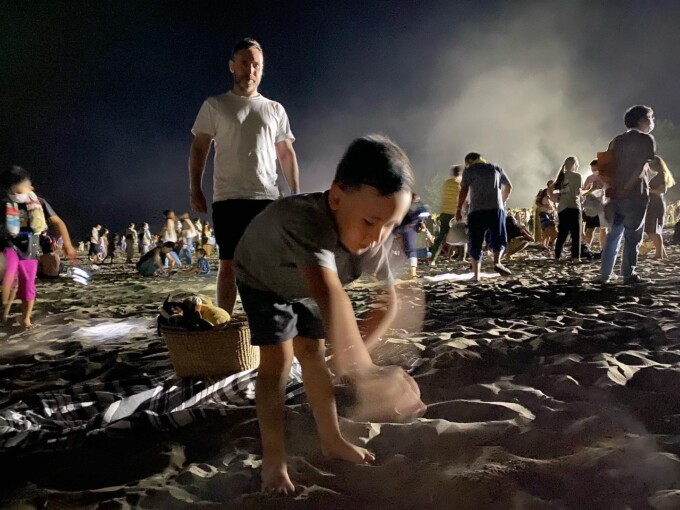 And after I grew up and my grandparents passed away, I stopped going to the fireworks there.
I went here on a date with Eme-chan and that was the first time.
That was long before Fionn was born.

Many years later, this year when Fion was 5 years old, we happened to be able to come as a family.
There were no food/drink stalls because of Corona and no Bon Odori dancing on the beach, but I’m glad we were able to let him experience a normal Japanese summer like this.

When he was born, when he can remember, Corona started, and everyone was wearing masks and the irregular world was the norm.
For Fionn and his friends, many normal things will happen for the first time in the future.
(I’m assuming Corona will be over. lol) 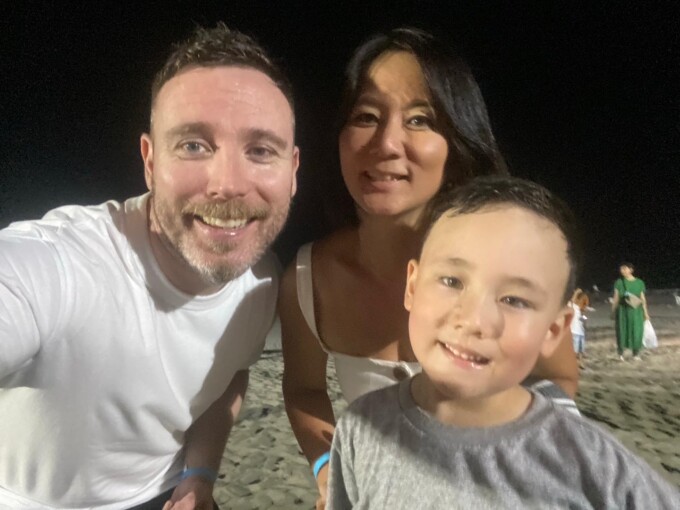 Bored with fireworks and covered in sand on the beach at night is gonna be a great experience and a great memory for him. 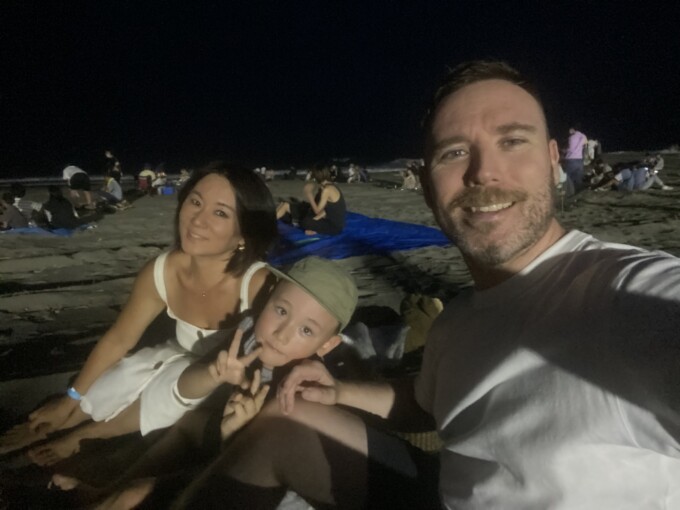 Yes, yes! In Japan, blue sheets are commonly used as rugs!
I know they are cheap and convenient, which is why they are so popular, but I have always hated them.
I think they seriously spoil the scenery of cherry-blossom viewing, beaches, athletic meets, and everywhere else.

I wish the custom of using blue sheets as rugs would disappear.