I’m the type of person who can’t get ready early enough for these things every year.
I looked back and checked and found that every year around this time, I would post “I finally did it!” 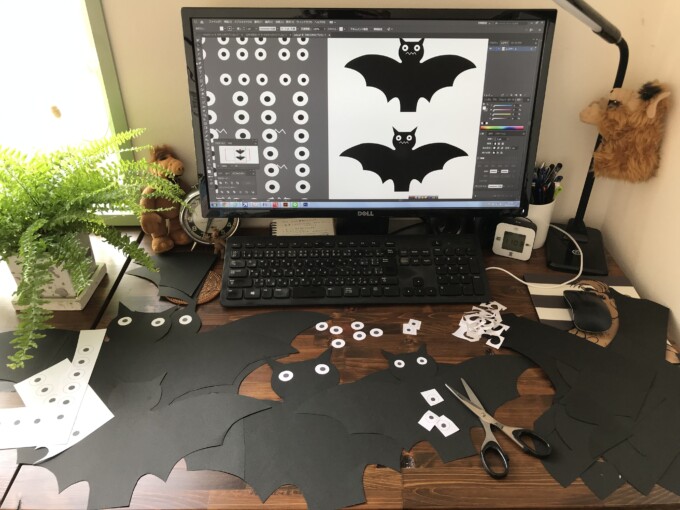 I started making these bat decorations 3 years ago, since 2019.
I started with black construction paper and didn’t think anything of it. 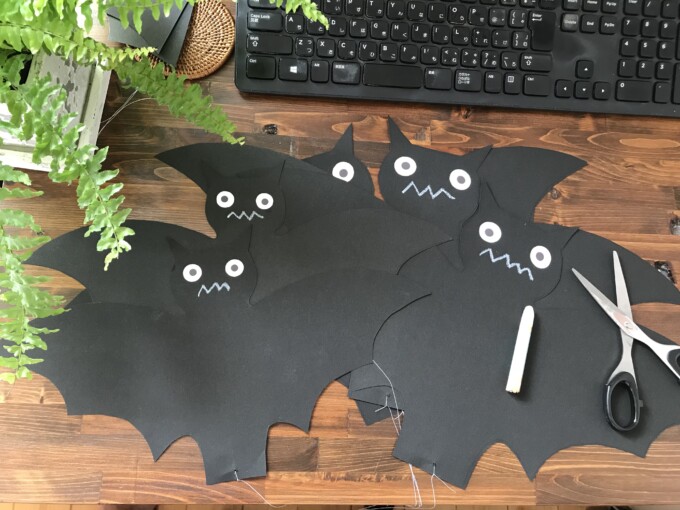 First, I drew an illustration on the computer, printed it out, used it as a mold, and cut out the construction paper.
I put the eyes on it and drew the mouth with Fionn’s white crayon.

Fionn, who was 2 years old at the time, was very good at helping me make it. 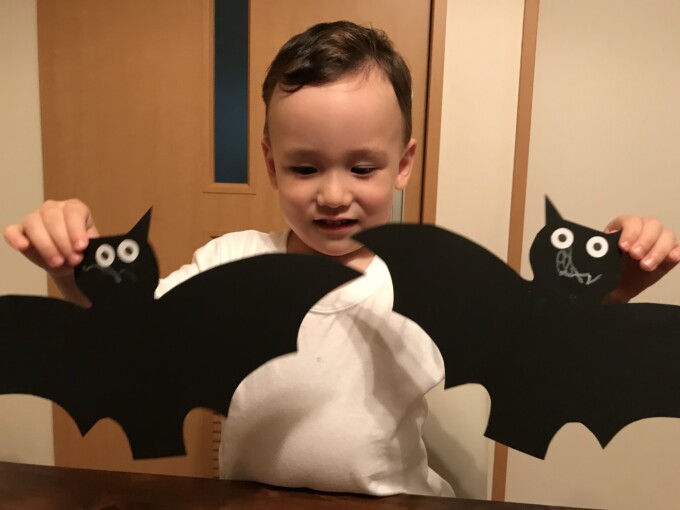 Fionn put the eyes on the paper and drew the mouth! He did a great job!
I have loved drawing and crafts since I was a little girl, so I try to give Fionn lots of opportunities to do the same from a young age. 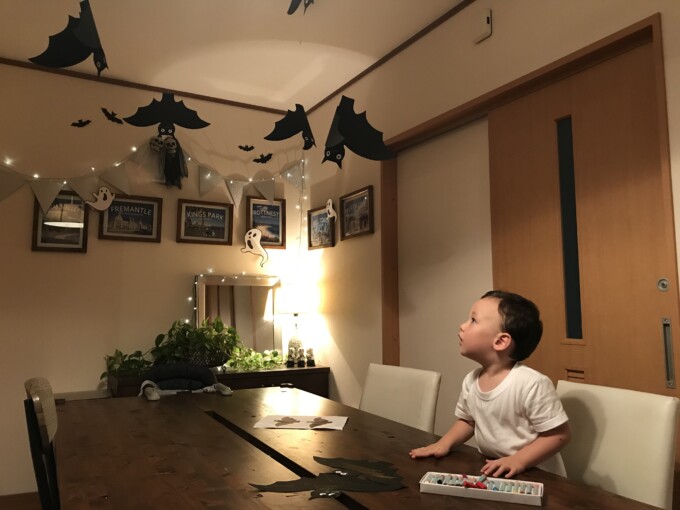 This first attempt at decorating a bat was on construction paper, so it got firmer and firmer as time went on.
It looked like a bat with its wings closed, but it didn’t look so good when all the wings were closed, so the next year I made some improvements. 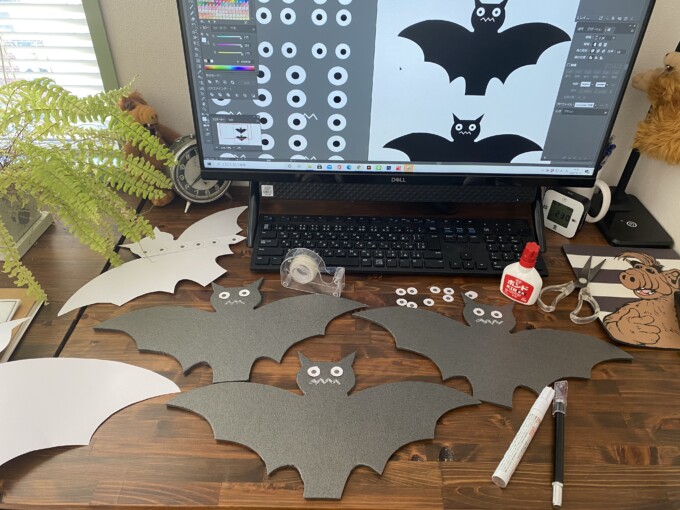 I bought a black styrene board from a 100-yen store and made it the same way.
This way, the wings will never be crooked! 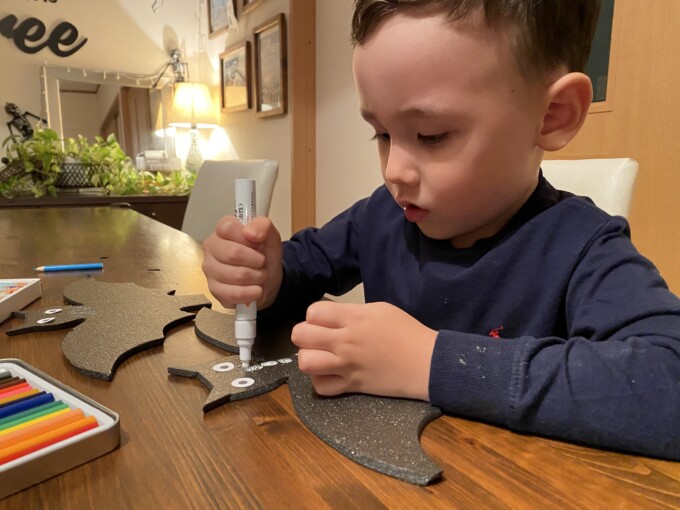 Fionn, now 3 years old, was even more creative than when he was 2, and he didn’t stop at just bats!
He also drew various patterns with a pen. I love it when things don’t turn out the way the adults want them to. 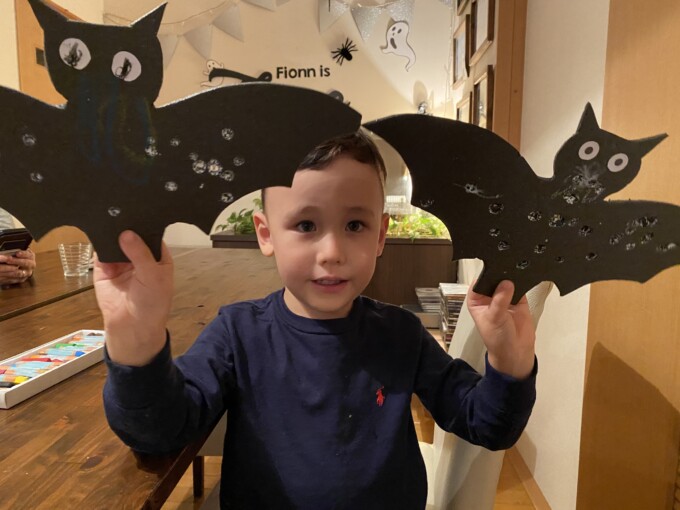 It seems to be a bat that was shot by a gun. Great imagination! LOL!
And because there is alcohol in the pen, the styrene board dissolves nicely and it really looks like a bat! 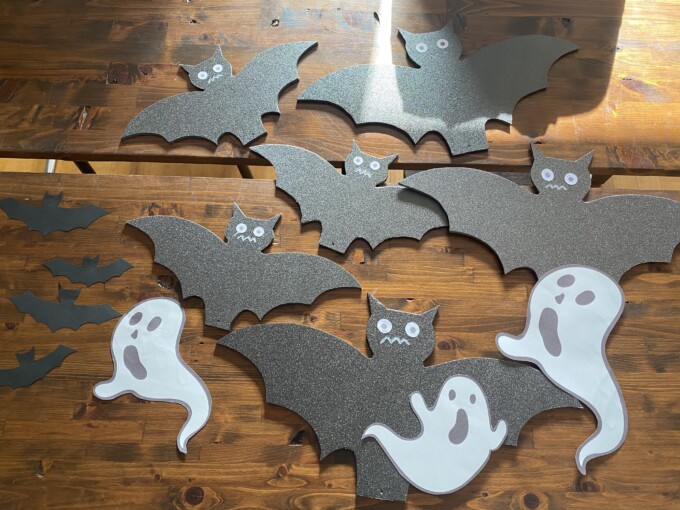 The bats and ghosts I made this year are still going strong, so I didn’t make any more last year or this year, and I’m using them as is for decoration. 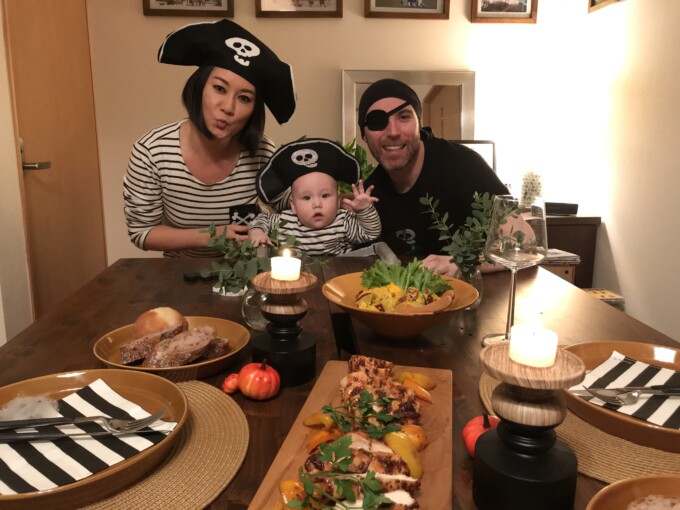 Since Fionn was born, we don’t go out in costume to clubs or events on Halloween anymore, but we started having Halloween at home when Fionn was 6 months old in 2017, and this was our first Halloween as a family of three 5 years ago. 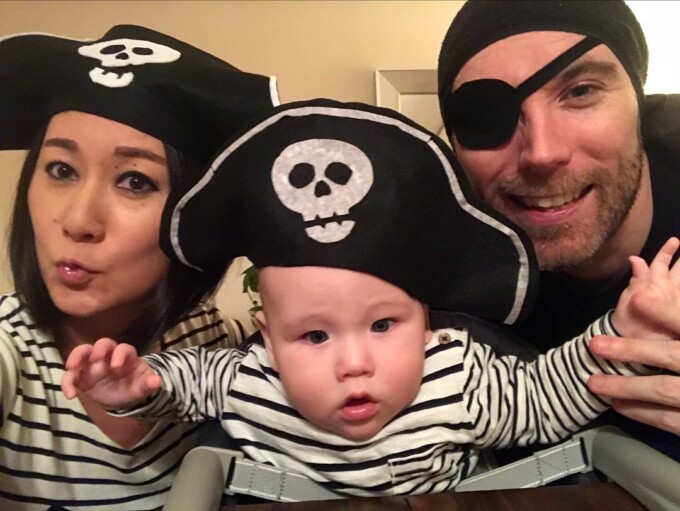 I can’t deny the feeling that Fionn was forced to take pictures, but looking back on it now, it’s a good memory and a good record. 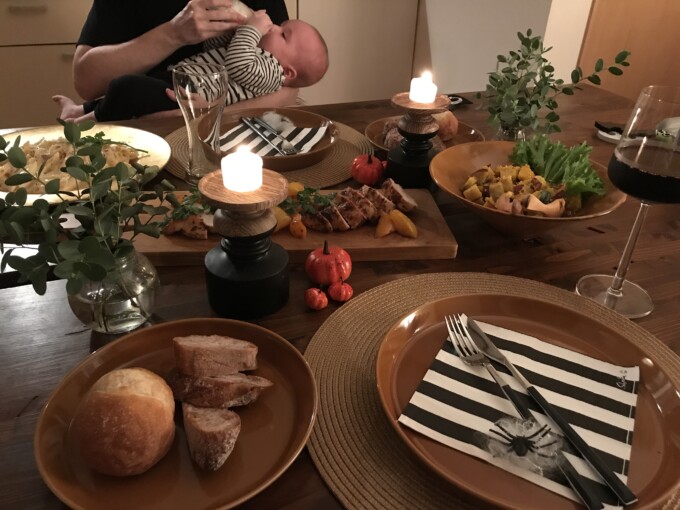 I guess I hadn’t made the meal Halloween-like yet, but I had somehow coordinated the table with pumpkin colors, which I didn’t remember at all. 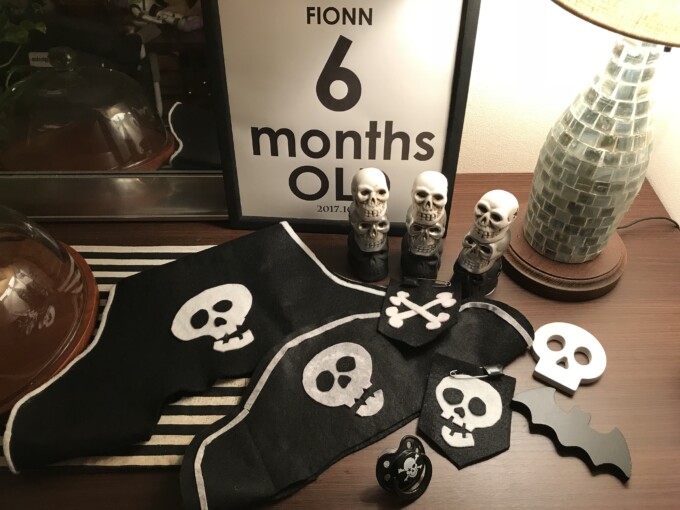 By the way, the costume I was using at that time was one I made out of 100-yen felt for a birthday party a while ago, when the theme was pirates!
If you look closely, you can see that it’s not very pretty, but it’s still reasonably well made. 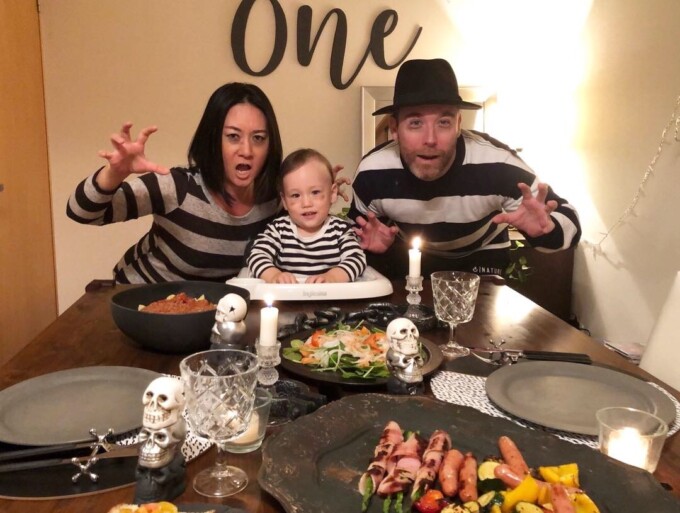 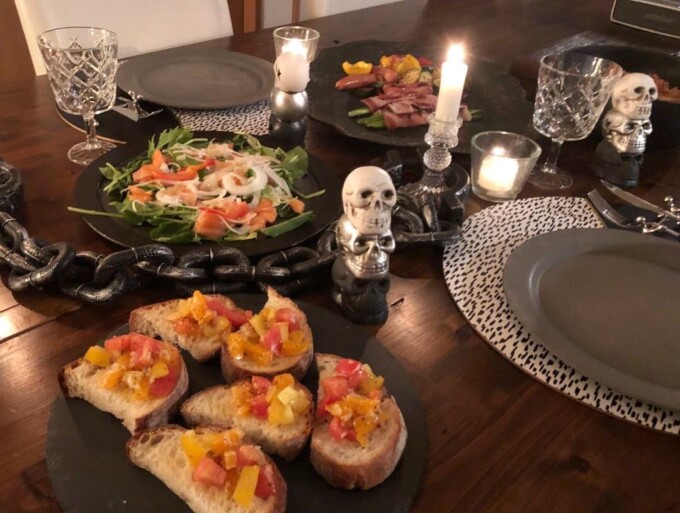 The decorations are a little more Halloween-like that year, but the dishes are a mess. 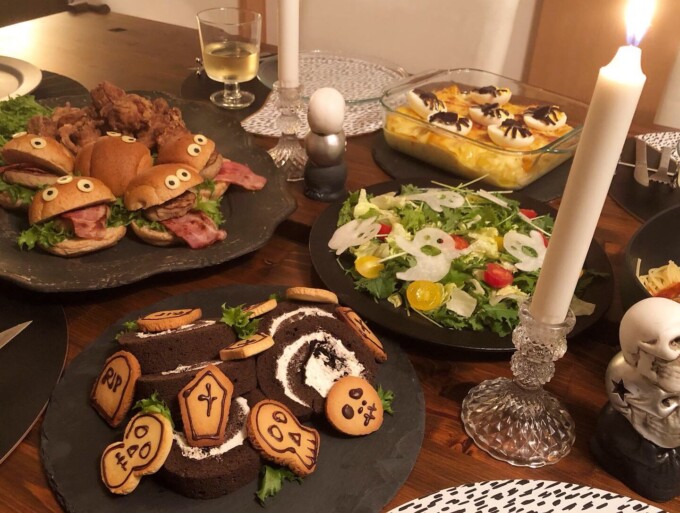 That’s when we suddenly start putting a lot more effort into the dishes, starting in 2019!
That’s because my niece and nephew have started to dress up and have parties together. 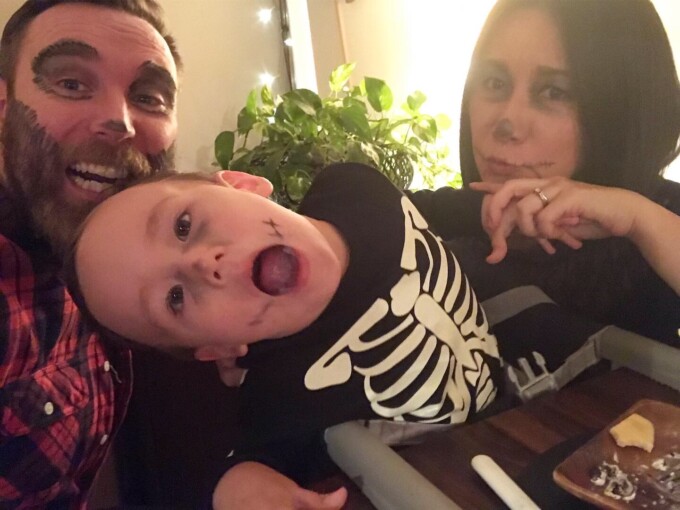 When the fancy dress was just make-up and we weren’t trying that hard yet. 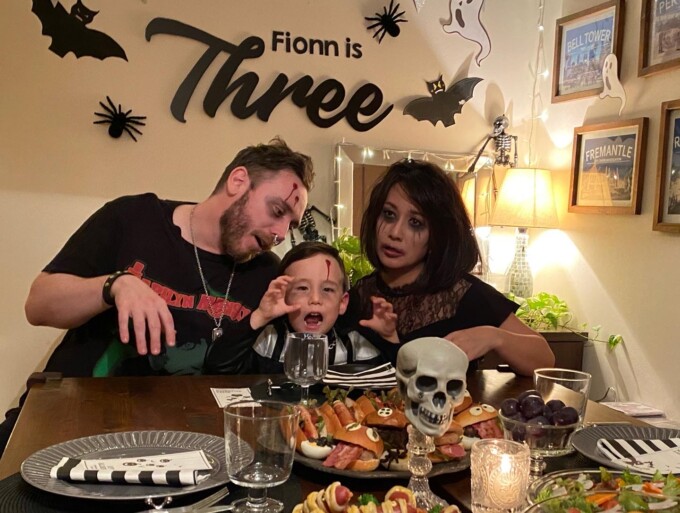 But in 2020, when Fionn was 3 years old, we were all zombies, and we started to try a little harder with the costumes.
We also started to cook together with the kids, which has become a tradition, and we’ve been able to add more variations to the menu. 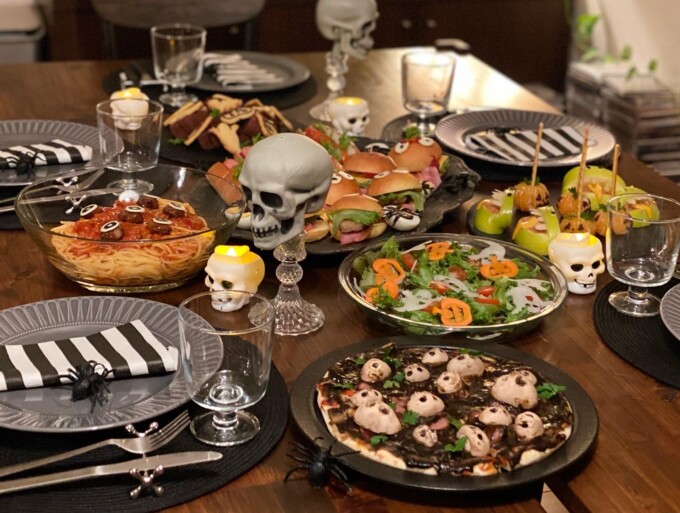 Last year, Fionn and Emmet’s Indiana Jones and Indy’s dad were a hit with everyone. 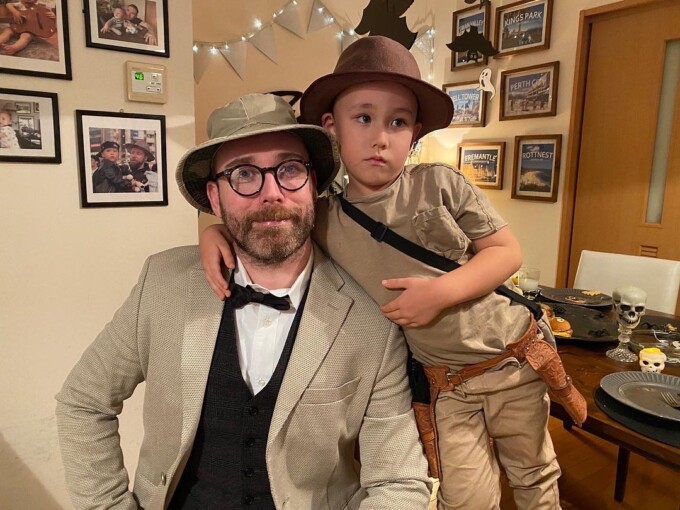 This was Fionn’s request. He has been watching the Indiana Jones movie every day when he comes home from kindergarten, and he wanted to be Indy for Halloween!
Emmet played Sean Connery.
I wrote a blog about it, so check it out! 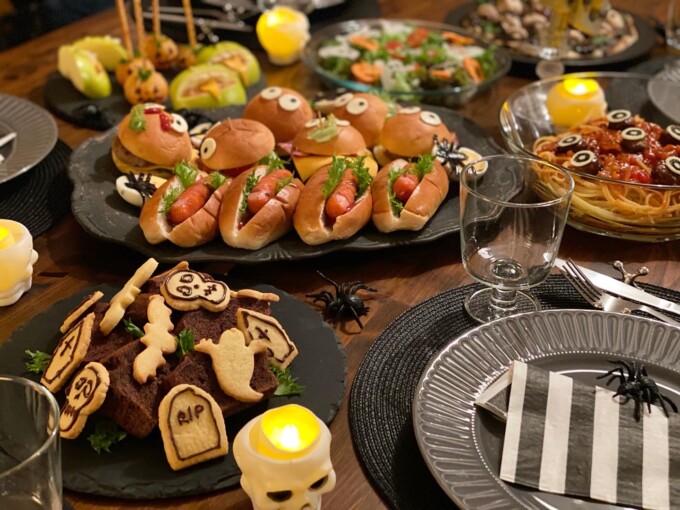 I’ve added a few new dishes, but I’m sure I’ll make them again this year, as I’m used to making the same menu (tongue and cheek hamburgers and finger hotdogs) every year in response to the kids’ requests.
I also write about cooking, so if you’re interested, check it out!

I’ve only got about 10 days left this year, so I need to start thinking about what I’m going to make for the new menu, and I also need to decide on a costume.
What are you going to be?