It seems that just five years ago today was the day we held Fionn’s 100th day celebration.
Facebook, which is very witty, reminded me again. 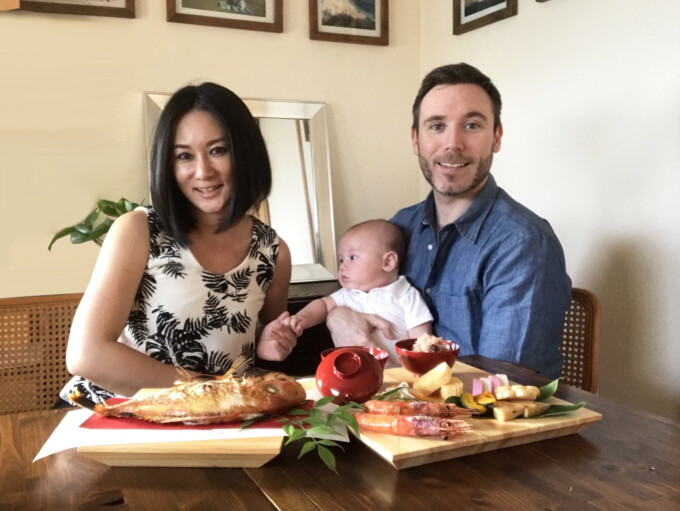 In my case, Emmet is a foreigner and my mother and grandparents passed away early, so
I’ve been noticing all the Japanese customs, traditions, and ways of doing things in Japan, because my friends around me have been doing them.
Even after I realized, I mostly looked up how to do it on the Internet.

If my mother were still alive, she would probably help me with various details and I would be able to do things more properly. 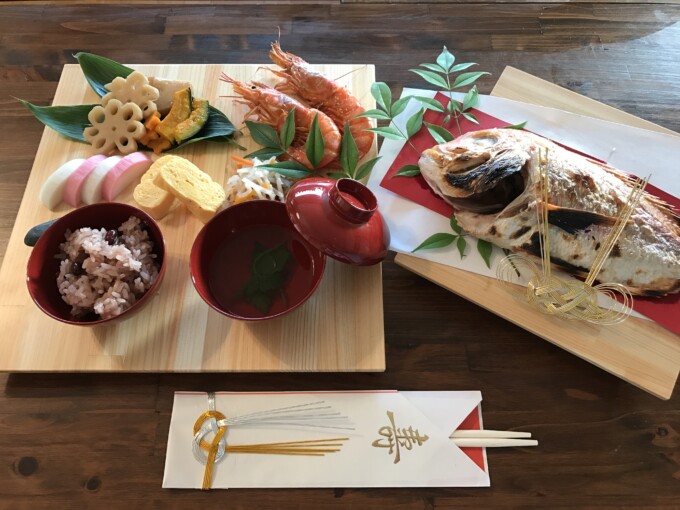 I don’t know if I actually did this when I was 100 days old, because my dad doesn’t remember.
But I feel like it’s better for my child to respect such traditions.
Well, I’m not averse to celebrations and traditional Japanese customs.

The dishes were homemade except for the sekihan (red rice) and kamaboko (fish cake).
I think it looks a bit messy when I take a picture of it like this… The sea bream is burnt and has no tail… 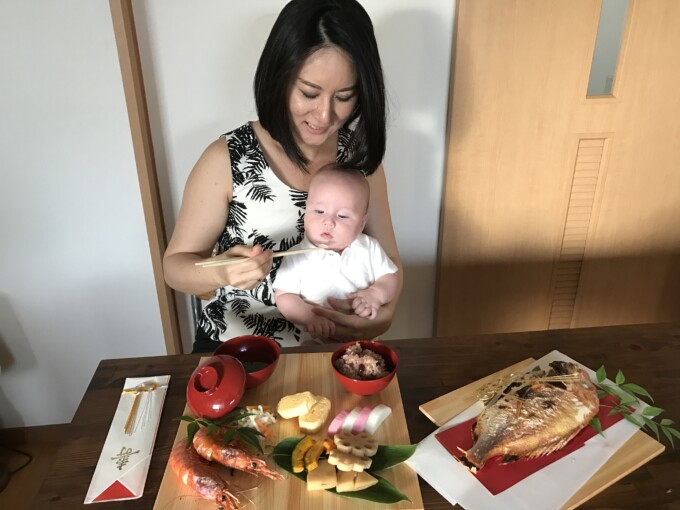 I think the presentation of the food looks OK on the board that my father made a while ago. I always try as best as I can even though I don`t know much about it. 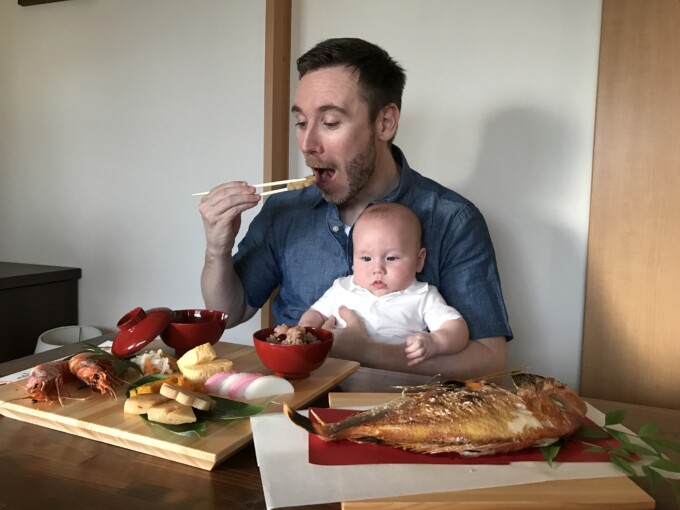 When I uploaded this picture, Emmet’s mom asked me, “What does it mean that Fionn can’t eat?” I told her that it meant “So that he would never have to worry about eating in his life.”
She was surprised when I explained to her that it is a traditional event that has existed since ancient times.

In other countries, there are not many ceremonies like this, so the only non-Japanese custom Fionn did after he was born was to have a baptismal ceremony.
It’s a religious ceremony because everyone in Emmet`s family are Catholic. 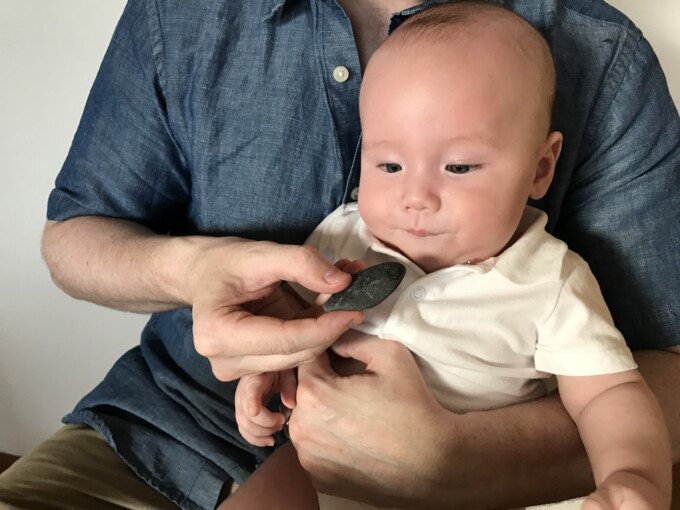 And this! I didn’t know the meaning of this “stone” either.
It’s a “hardening stone” to make a wish that the teeth will be strong enough to eat hard food.
People in olden days thought about a lot of things and made a lot of rituals. It is interesting. 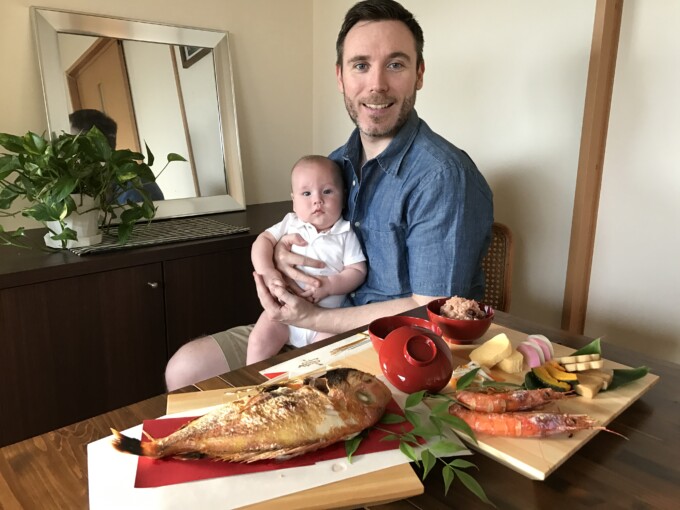 Well, I think we have done everything we need to do so far, but Fionn, who is 5 years old this year, is still waiting for the Shichi-Go-San.
I heard that boys are supposed to do it at the age of 3 and 5, but recently I’ve heard that it’s okay to do it only at the age of 5, so that’s my plan. 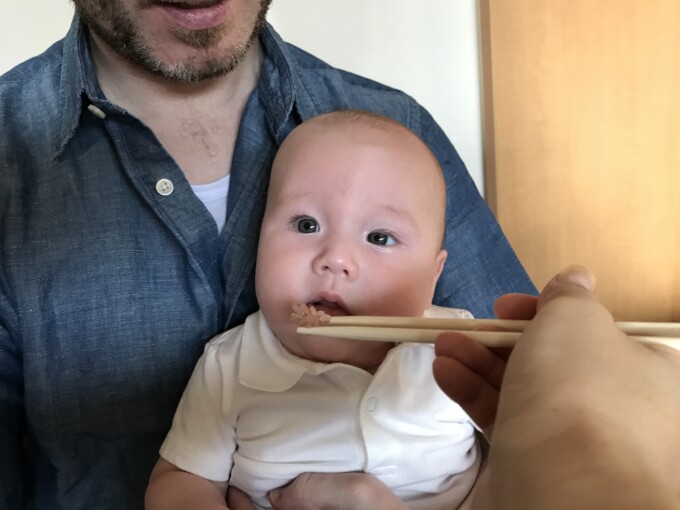 My maternal grandparents owned a kimono shop, so they made me kimonos for every occasion since I was a child.
My mother had the knowledge and sense, but we never learned anything, so even though we have many beautiful kimonos at home, we haven’t been able to make use of them.
It’s a waste, isn’t it?

We should wear them on festive occasions like this! So I decided to put on my mother’s kimono for Shichi-Go-San, too, so let’s do it properly!
The FB announcement reminded me of the Shichi-Go-San at the right time. It will be both a memory and a keepsake, so let’s go for it!