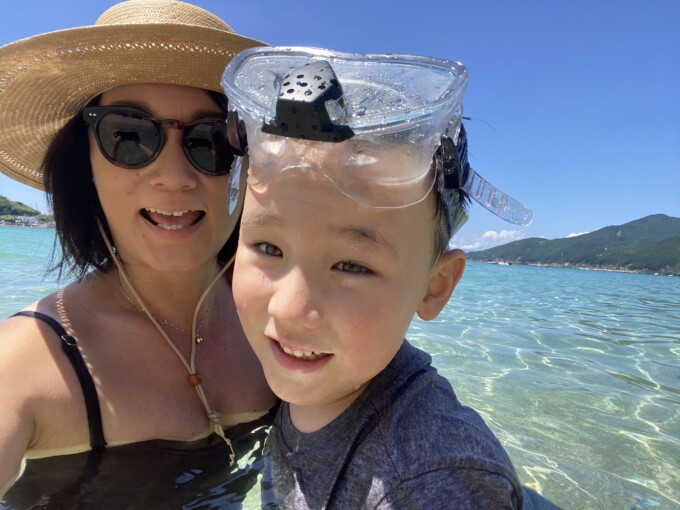 Yes! My iphone is back! Once again, I recognized how dependent I was and how I packed too many important things on it.
The moment I got it back, I immediately did a backup and spread out the storage locations. I’m ready for a sudden accident now! 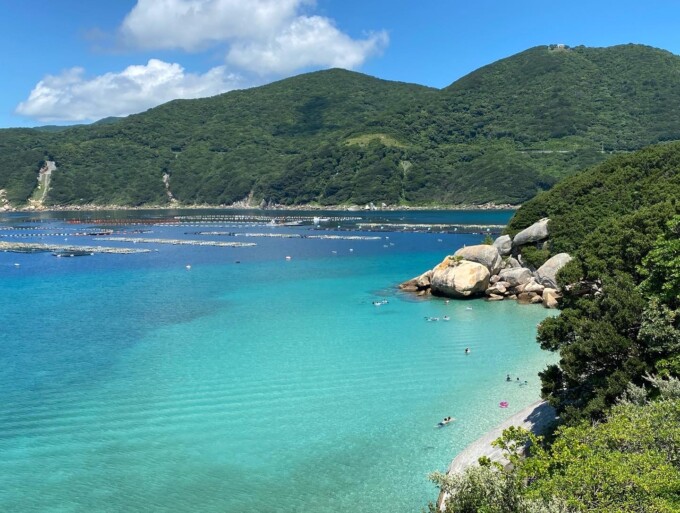 As I mentioned in the title, Kashiwa-jima Island in Otsuki Town, 50 minutes from our house, is on the western edge of Kochi.
There are plenty of beaches even if you don’t go that far, so I haven’t been there much lately.
This time I went there because I had to deliver some work! 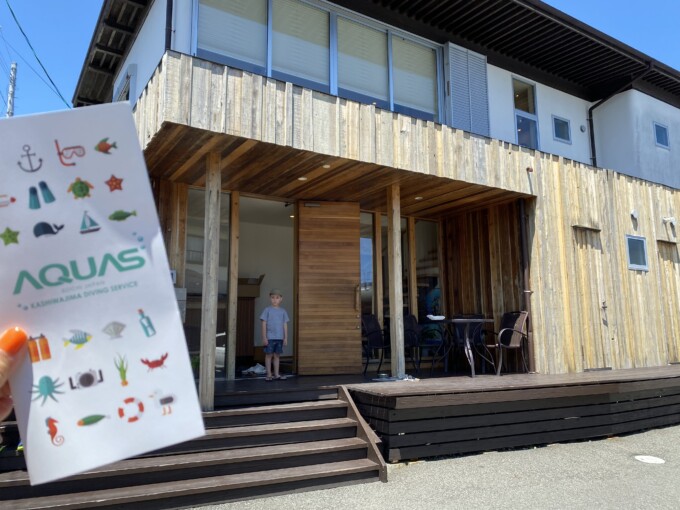 That’s AQUAS, which also offers diving services and lodging!
I had made a brochure for this place before Fionn was born, and this was the third reprint of the brochure. 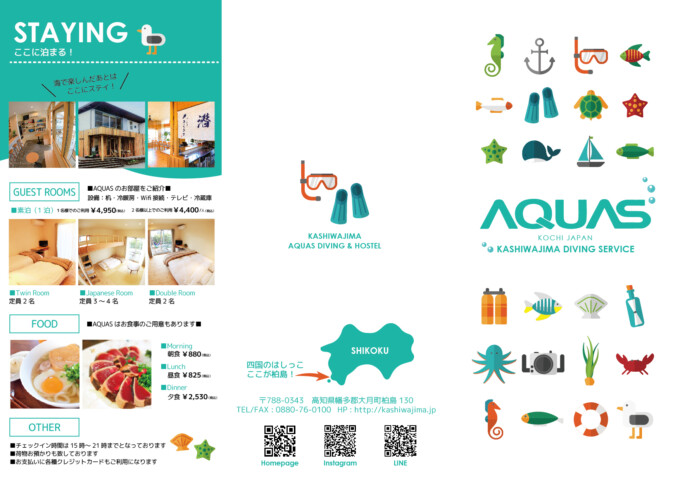 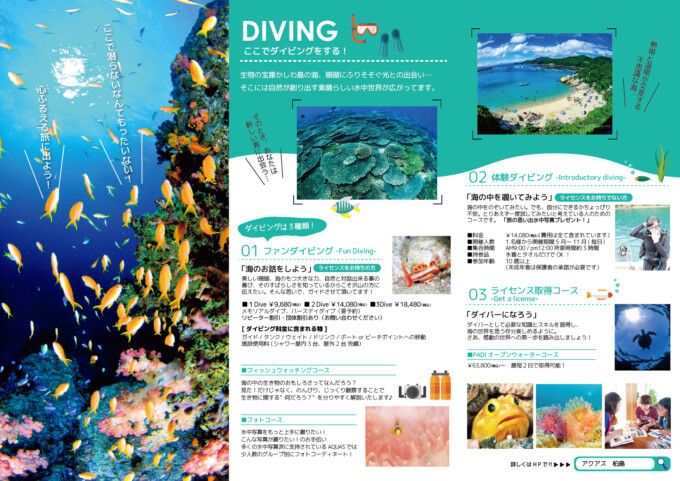 I didn’t ask them to pick up the brochure, I just went to deliver it myself!
Of course, I had to go straight to play on the beach!

The day before, I messaged him that I was going tomorrow, and he said the ocean was so clear that the timing was perfect! I went and found out that it really was.
When I got there, I found the emerald green sea was so clear that it looked like it wasn’t in Japan anymore. 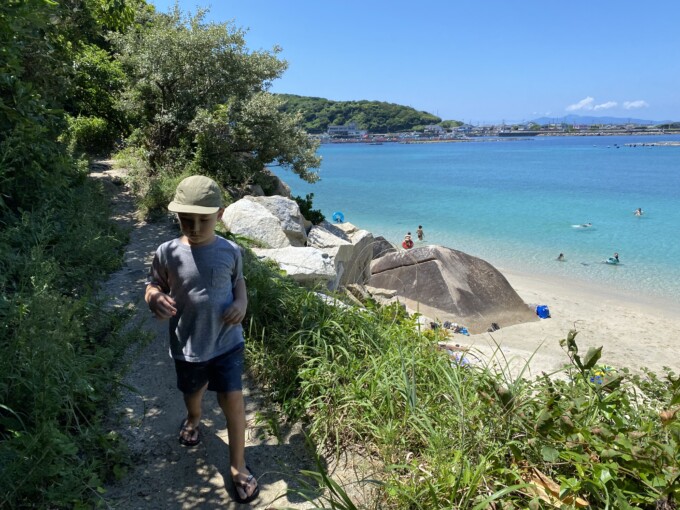 Parking on the beach, which used to be the norm until a few years ago, has been completely banned for people playing on this beach.
Fionn was a bit grumpy because he had to walk from the parking lot a bit further away. 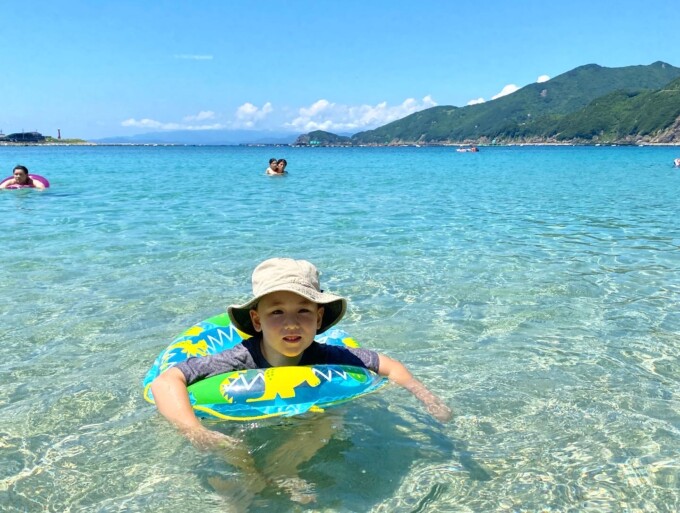 But as soon as he saw the ocean, he suddenly got all powerful and ran straight into the water. 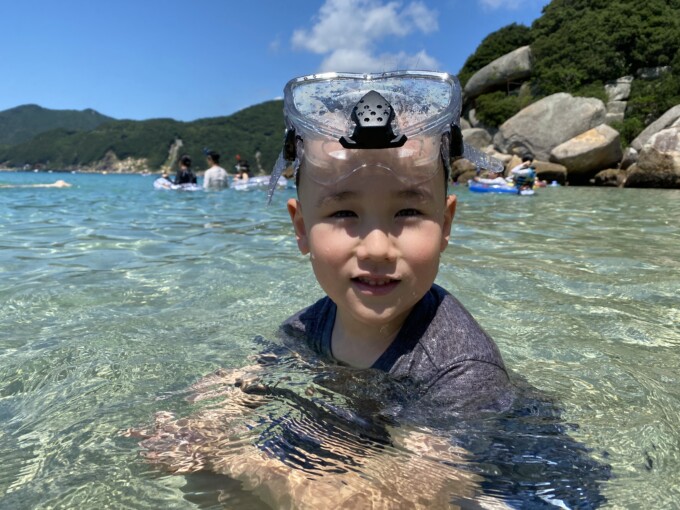 Moreover, as I wrote yesterday, the day before, he suddenly became able to dip his face in the water.
The next day was the day after that, so he was so happy to be able to see underwater and he was diving nonstop! 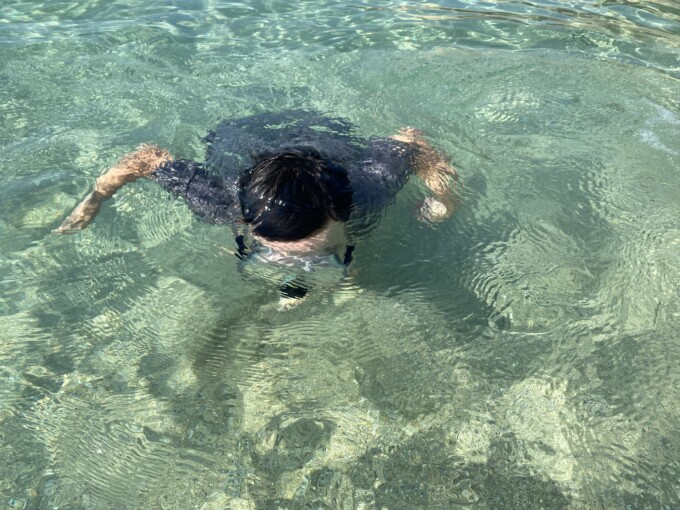 He was so lucky that the first underwater world he saw was this beautiful ocean at Kashiwa Island! 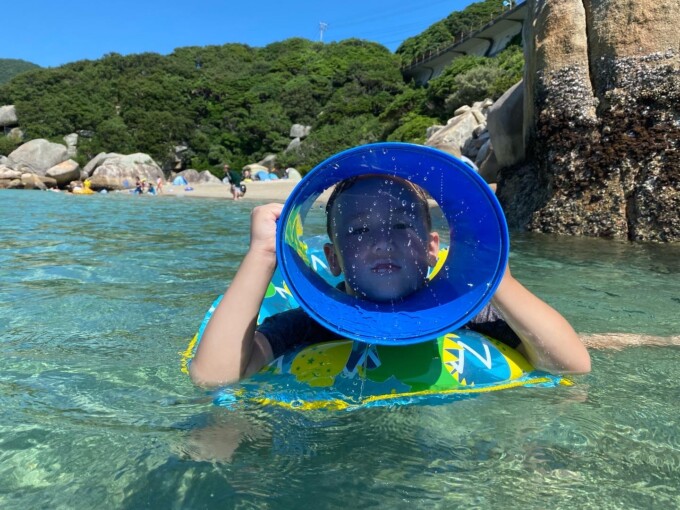 On the way, we moved to a rocky point a little to the side. But it is a shallow area, so we could walk there.
Lots of tropical fish were here, and lots of people were enjoying snorkelling! 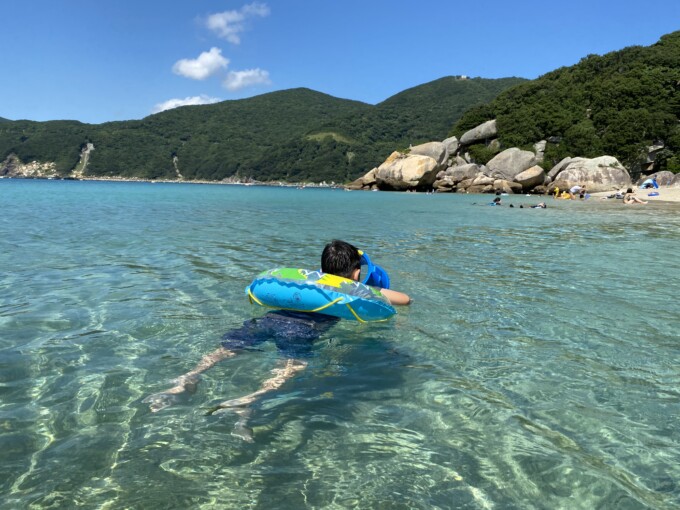 That’s where this secret weapon of Fionn’s, the underwater bucket, comes in handy!
I had seen it used somewhere once upon a time, and remembering that, I looked for it the morning of the day and bought it. 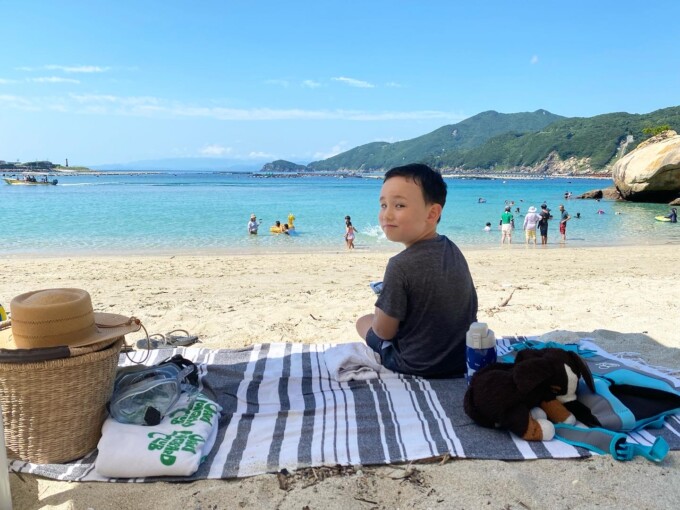 During one of our snack breaks, Fionn suddenly said, “Mommy, this is the best beach! !””I want to bring Daddy here next time!” Too cute!
(Daddy had to work since it was a weekday, or rather, I had to go there for work, too.)

Anyway, we dove and played, swam and played, made sand piles and played, peeked at the fish and played.
We stayed at the beach for 4 hours. I managed to protect my face with sunscreen and a hat, but my body got all burned. 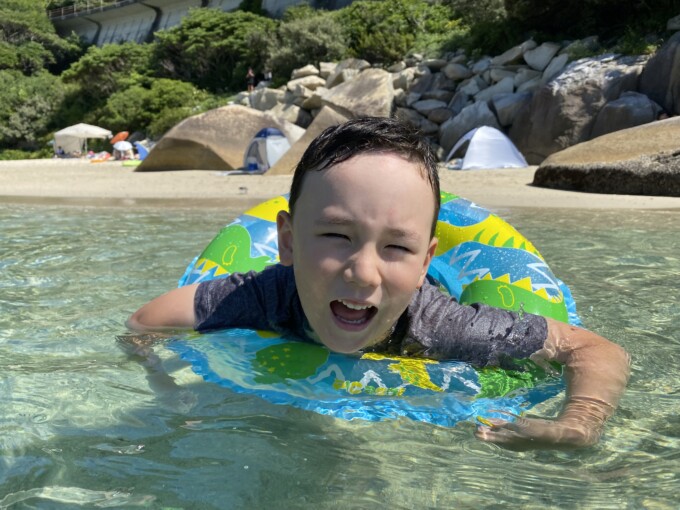 I kept asking him if we should go home, but he kept saying, But every time he said, “Noooooooo! Not yet!
I was happy to see him having so much fun playing in nature, so I stayed for a while. 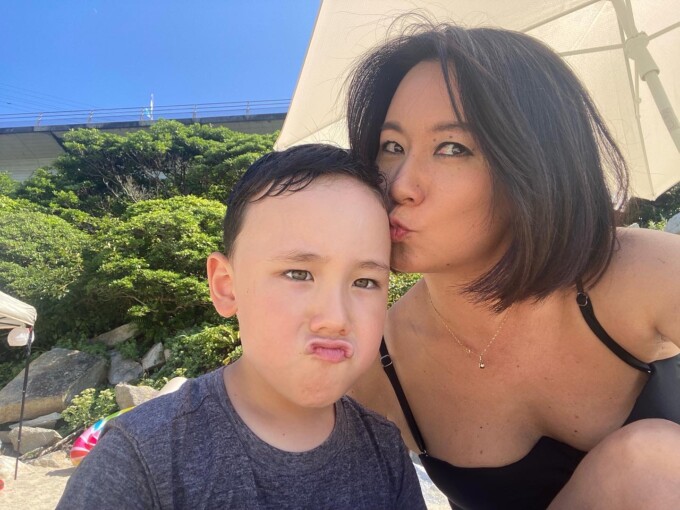 I was posting some insta stories at this time, and even my local friends were saying
“It’s still so beautiful! I’ll go there at least once this year!” 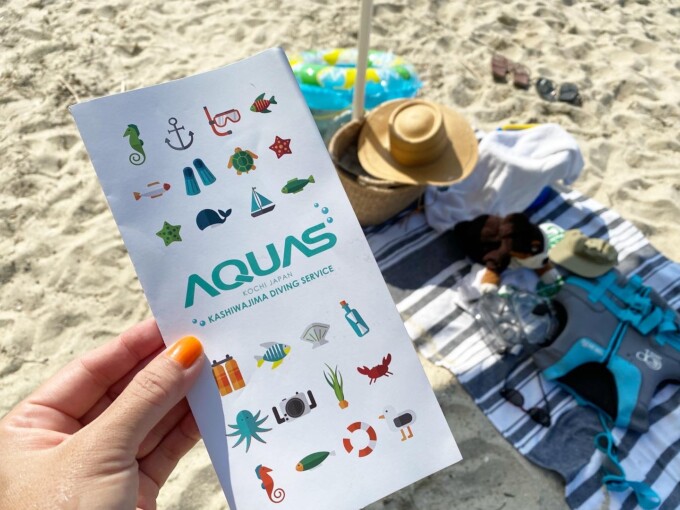 I would have stayed at AQUAS if I could have, but it was the first summer since we lost my activity restrictions because of COVID!
And there was no way it would be available during the busy season, so we promised to come back another time and left.

But I will have to go back again this summer at Fion’s request.