Every time we go back to Perth, they invite us to their house for BBQ and lunch!
This time also we were invited to the home of Mike and Sheila, friends of Emmet’s! 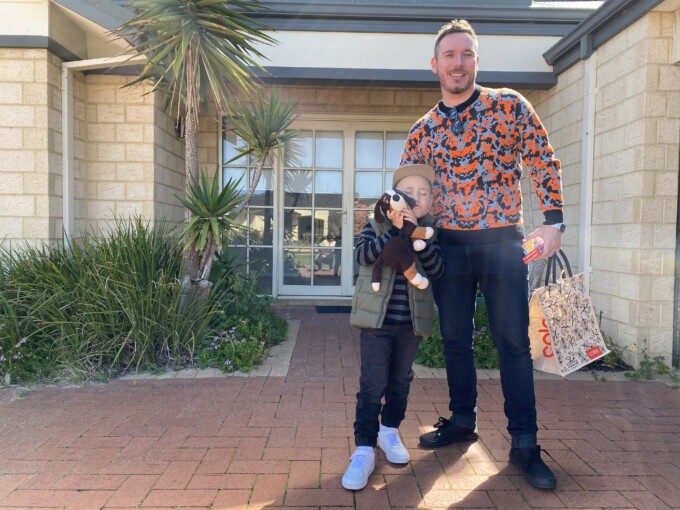 During the three and a half year gap because of Corona, the kids have grown up so much, so this time they can play together!
So Fionn was looking forward to seeing them before we went. 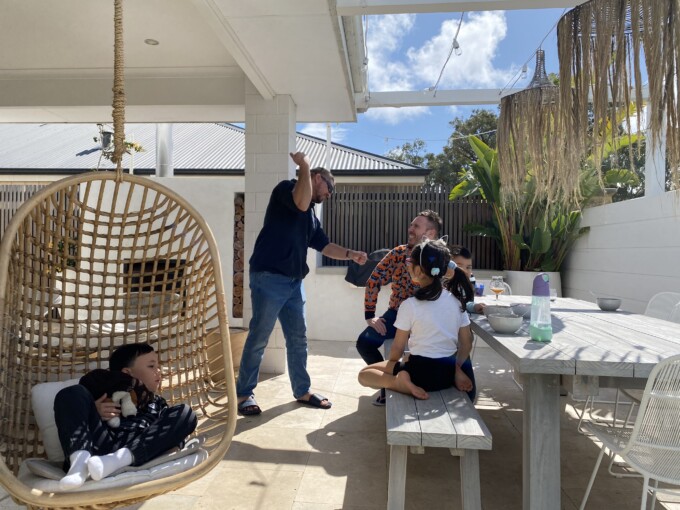 It was supposed to be winter, but it was warm in Perth, so we all had lunch outside.
They always keep their house so clean and nice, it makes me want to have my own home in Australia when I come to their house. 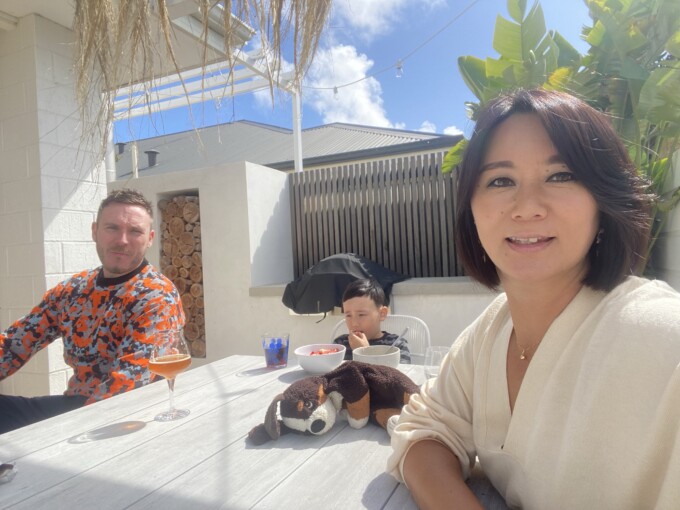 Look at this blue sky! It’s a really nice climate to be able to have lunch on the deck in the garden like this even in winter.
The black covered area behind Fionn is a BBQ grill.
On Emmet’s left is the fireplace, so even if it’s a little chilly, we can warm up by the fireplace, ah, I’m jealous. 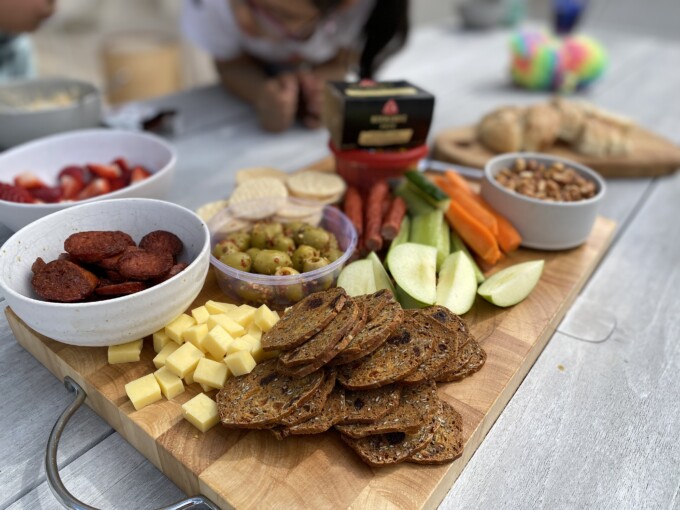 A nice hors d’oeuvre board they’ve prepared for us. 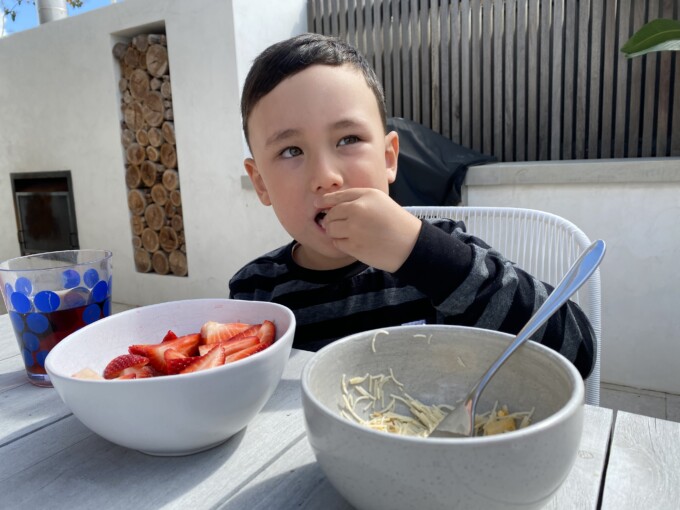 Sheila is from Singapore, so she is very good at Asian food too.
So the kids had rice noodles with a mix of vegetables and shrimp (which I ate so much that it was delicious) and fruit. 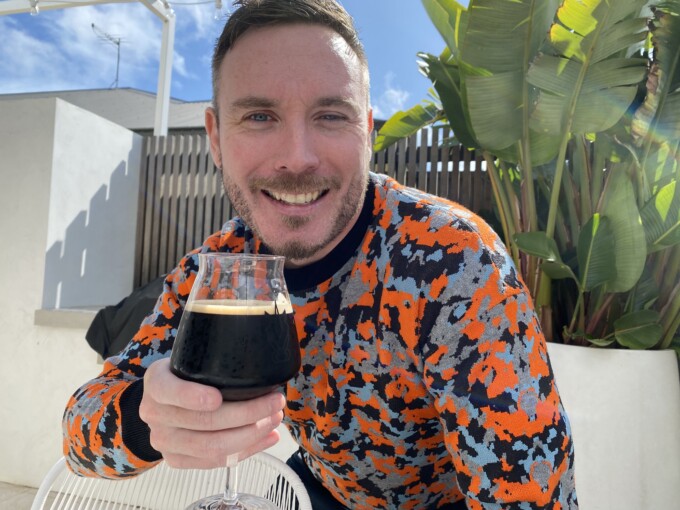 And this! The one Emmet was really looking forward to!
Mike’s homemade craft beer. Every time we go there, he makes different kinds of beers with different tastes.
It’s fun to listen to his explanations and compare the beers. 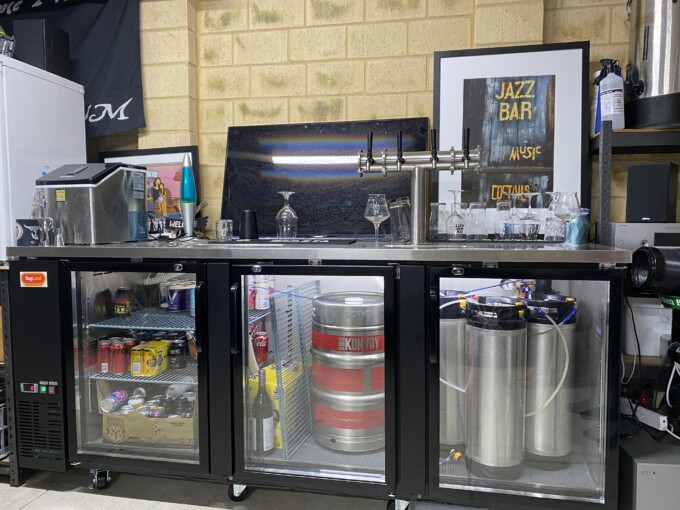 It seems to be a man’s dream to have a personal bar like this in his garage. 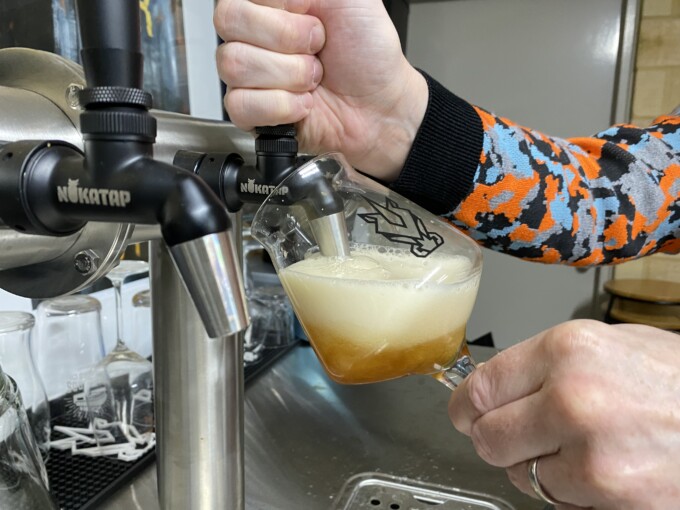 I guess it would be fun. It’s definitely one of the things they want to do when they have a house of their own. 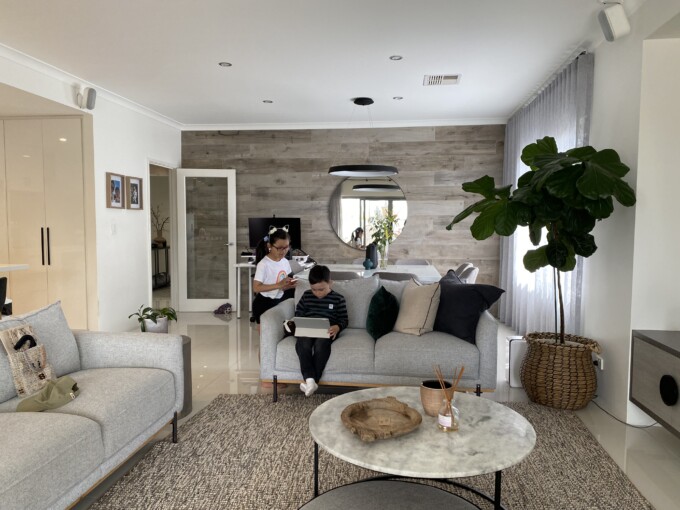 After a while, the kids had their iPad time.
It just so happened that their kids were also playing “Minecraft”. It’s popular all over the world. 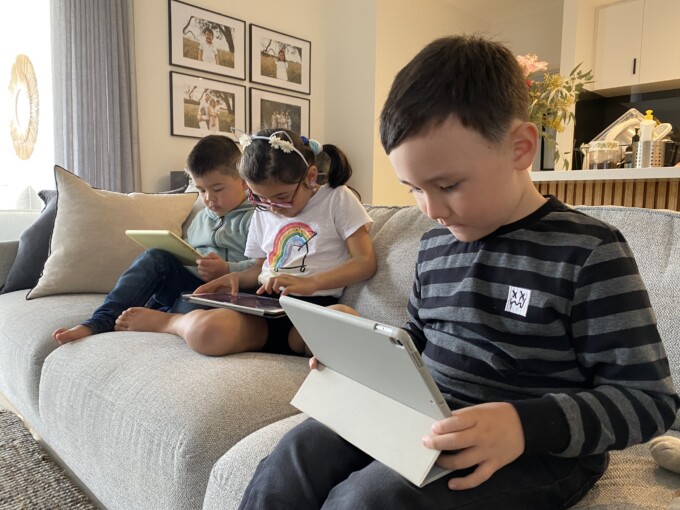 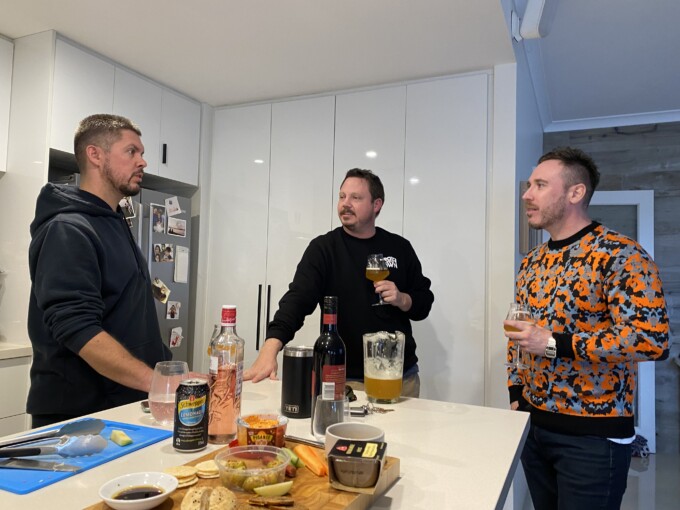 Another Mike, who lives in the neighborhood and also happens to be in the same class as Emmet, came in the middle of the party and got into the conversation even more!
I was able to understand most of what they were talking about and join in the conversation, so it was fun for me too! 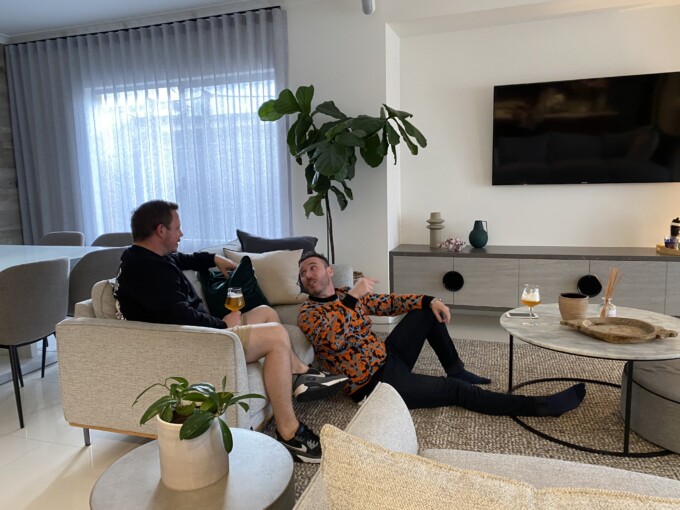 Eme-chan is usually in an environment where he can understand Japanese but sometimes it can be difficult.
He seemed really happy and happy to be in an environment for the first time in three and a half years where he could understand what was being said and could communicate with people no matter what they said.
He was joking and laughing a lot all the time, and he seemed very happy. 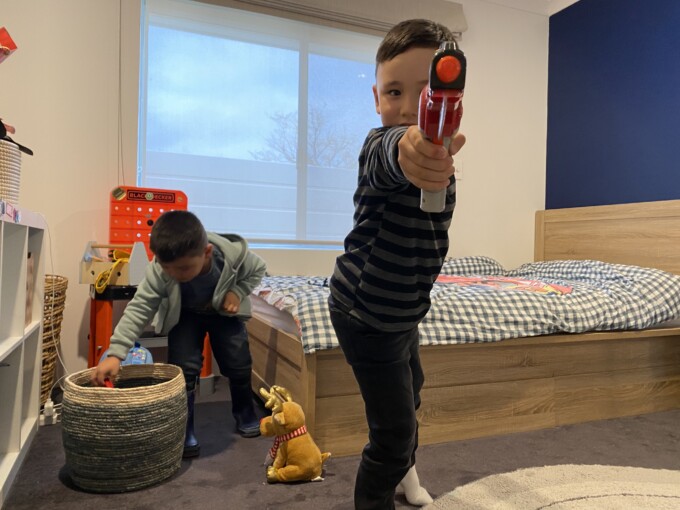 Mike’s girls came to visit at the same time Mike came, so they went to the kids’ room and went outside and enjoyed playing. 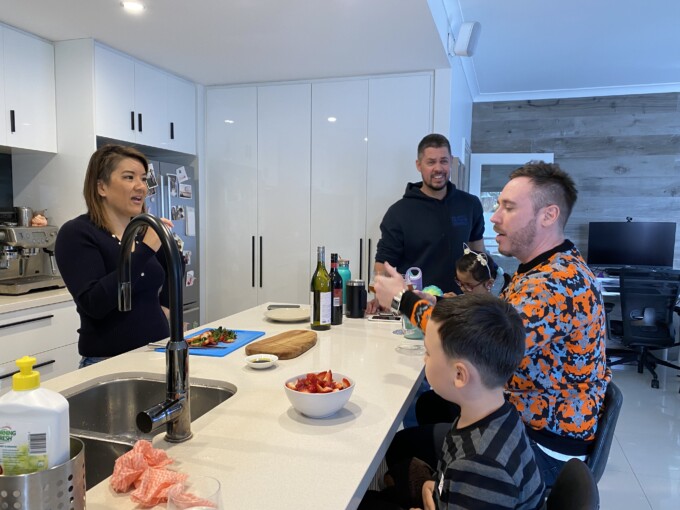 I know there is a language barrier (the girls are a little older than Fionn and they speak very fast), but they tried their best to communicate in English, and when they didn’t understand something, they would ask back, “What did you say?
I was peering at them from afar, thinking how nice it would be to be in a situation like this. 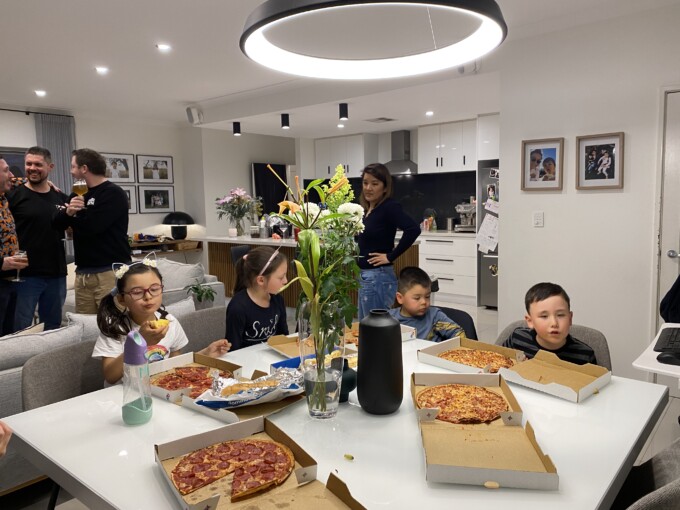 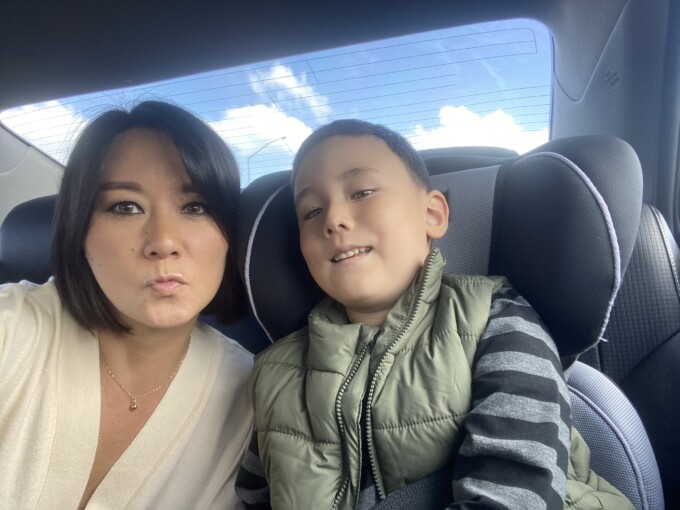 After that, Fionn got a little tired, so Fionn and I went home first at around 7:00 pm!
It’s only about 20 minutes away by car, so I’m going to pick up Emmet later.

Now, there is the state. (this is 2 nights ago)
Fionn is in bed looking at his iPad, and I’m writing this blog next to him.
and waiting for Emmet to call me. I’m sure he’s drunk as a baby right now. 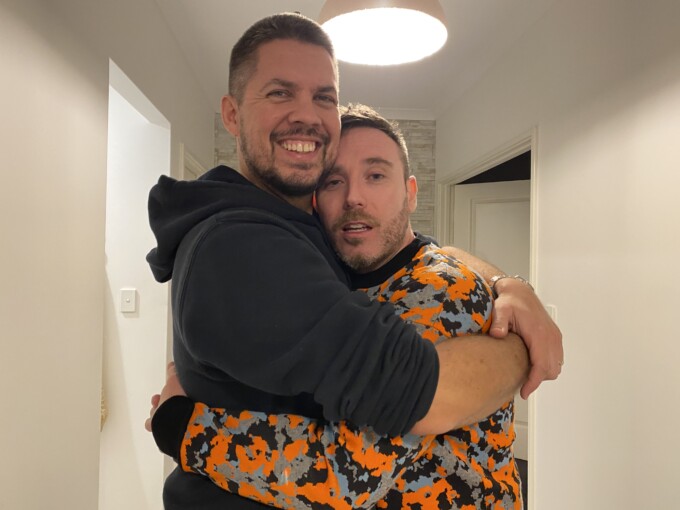 And this is the time ↑I picked him up. He was really drunk! haha
But I knew he had a really good time, so it made me happy. 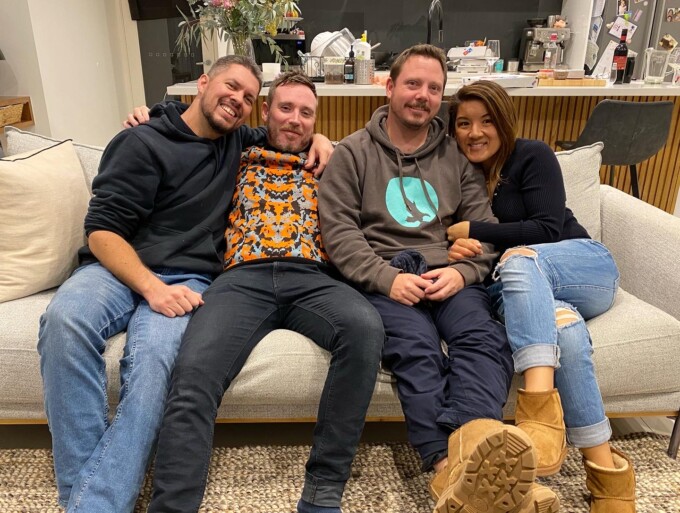 Thank you for everthing you guys did to us.
Maybe see you this week again!