My most favorite city Fremantle!

The day of my return is getting closer and closer. 3 weeks in Australia seems to have flown by faster than I thought!
I wonder why even weekends don’t come fast enough in normal life, but when things are fun, they seem to fly by so quickly! 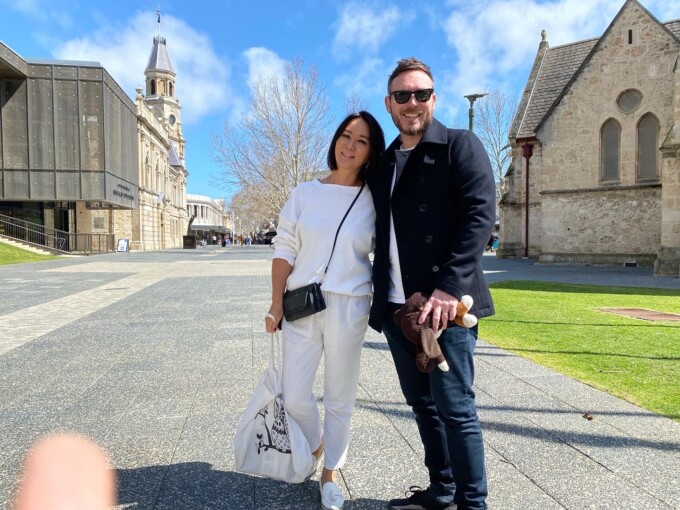 Yesterday we went to Fremantle, my favorite city in Perth!
I had to keep an eye on the weather, but it looked like it was going to be sunny all day yesterday, so we finally went!

By the way, this is a picture taken by Fionn. 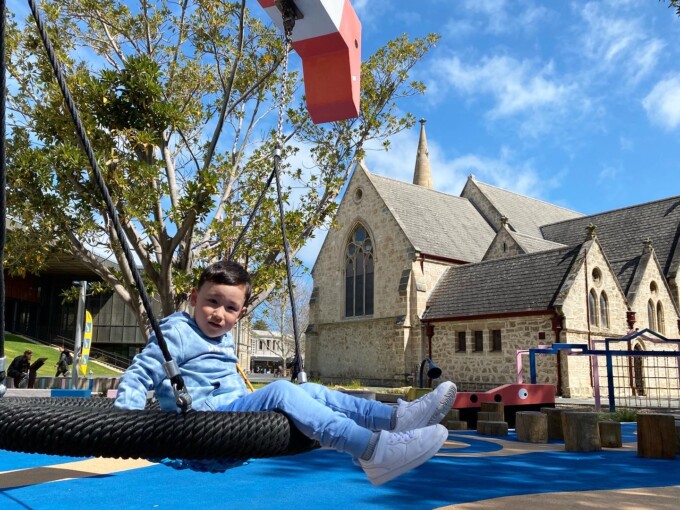 This place is said to be “the most 19th century port town in the world”.
The atmosphere of this town is completely different from that of other towns. You can easily recognize it from the pictures. 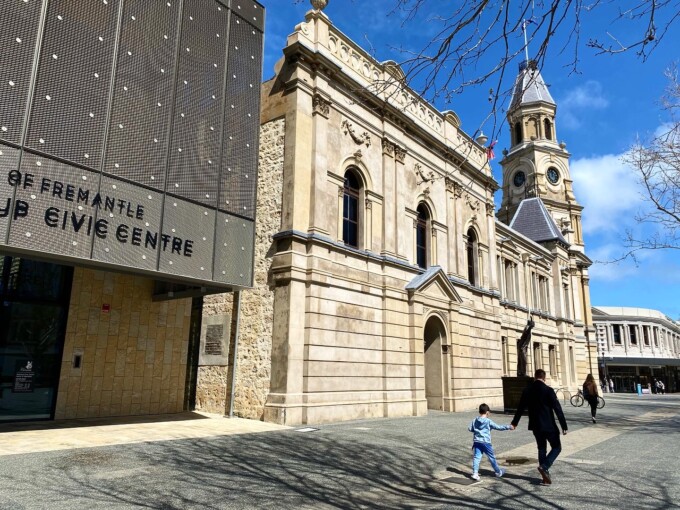 There are many historical buildings in this town, and there are also many stylish cafes and restaurants.
It’s also a bit artistic, which is a little too much for my liking!

We usually stay at a hotel for one night when we come here, but this time I decided not to because it was too expensive! 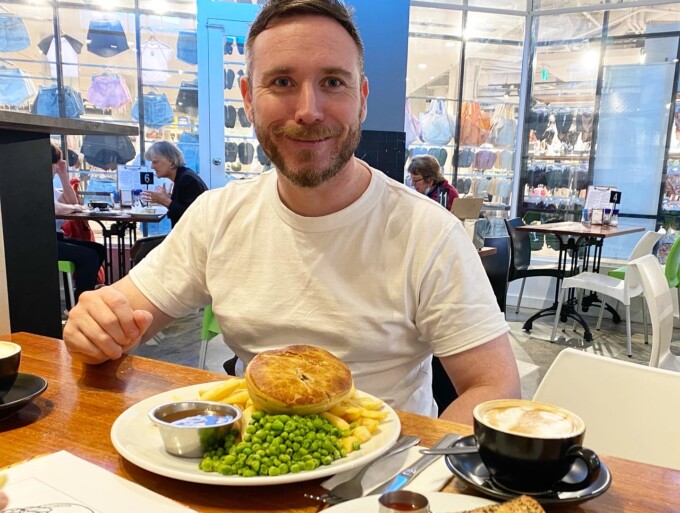 After we arrived, we took a short walk and played in a small playground, and then had a light lunch at a small cafe in town that has been around since 1925, we were also here last time.
Emmet was so happy with his favorite meat pie! LOL Super Aussie, isn’t it? 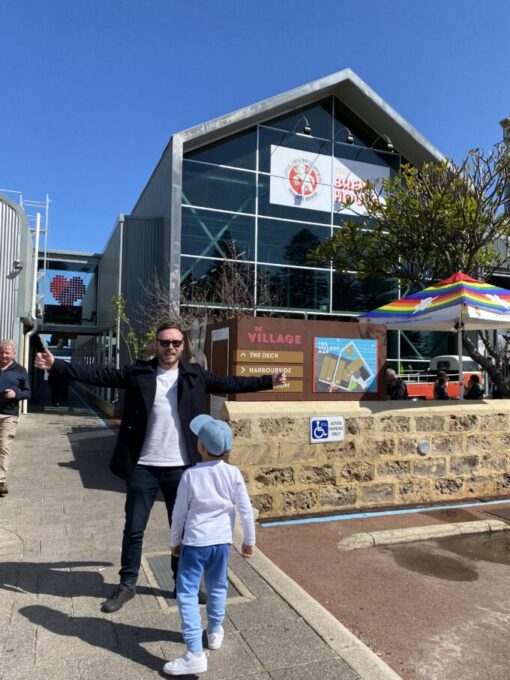 We met up with his friend at Little Creatures Brewery, which is another stop we make almost every time we come here, and this time we had a solid lunch.

We met up with Ryan, who became a friend of Emmet’s through work a long time ago.
Ryan is really kind and always talks to me more than any of Eme-chan’s friends.
I don’t feel alienated from him at all because he keeps talking to me all the time. 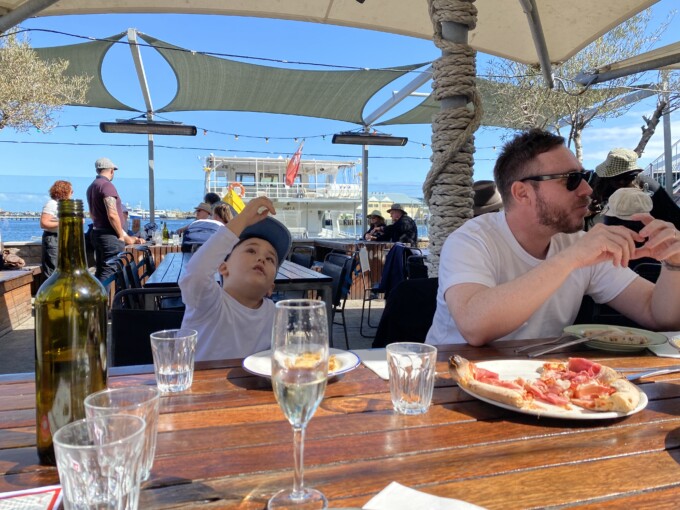 It is not that the other friends ignore me at all.
But there are still a lot of conversations that I can’t follow because of my English level.
But Ryan always manages to include me in the conversation.

I think this is a common experience when you live in a foreign country. 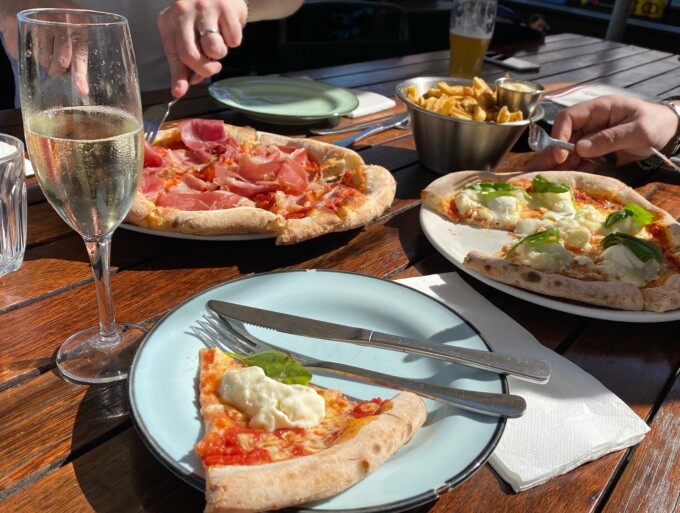 This is a brewery, so the beer is good, but I’ll have the champagne!
I can drive here even if I drink a little, so it’s fun to have a glass of wine or something for lunch. 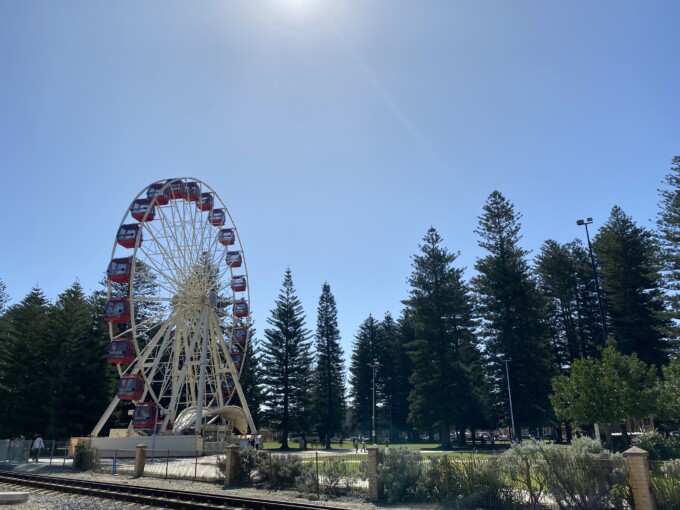 There is a park with a Ferris Wheel in front of us, and Fionn wanted to ride it.
So we left lunch and went for a ride! 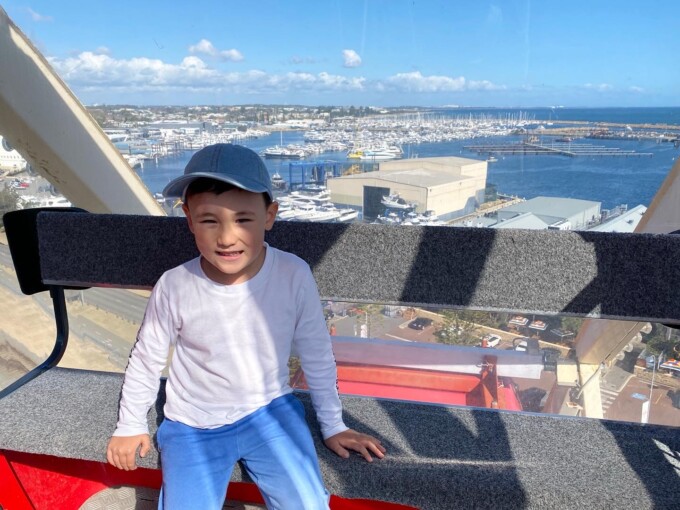 The lady in charge explained to us that it goes around three times! But it didn’t stop even after the third lap.
When I looked at the lady, she was posing with both hands in a “Good” pose and let us ride 4 laps.
I don’t think they would offer this kind of service in Japan because it’s against regulations, but in other countries, it’s more flexible or free, and this kind of thing adds spice to life and makes it more enjoyable, and makes you appreciate it more. 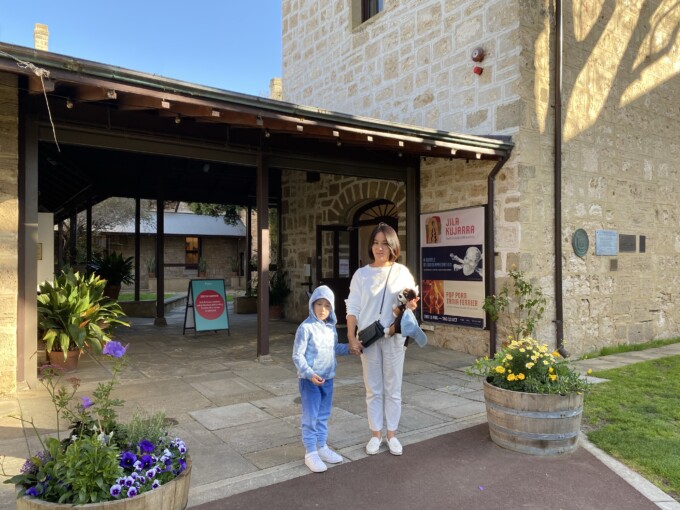 After a long and enjoyable lunch, we moved on to the Art Museum, which is another place we always visit.
There are always interesting exhibitions, and in the summer, there are live performances in the garden.
I really love this place. 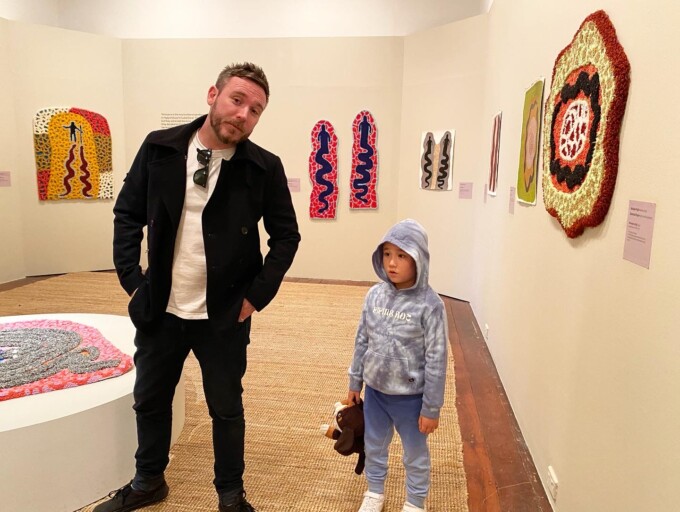 I will write a spin-off blog about the details and points that impressed me after I return to Japan. 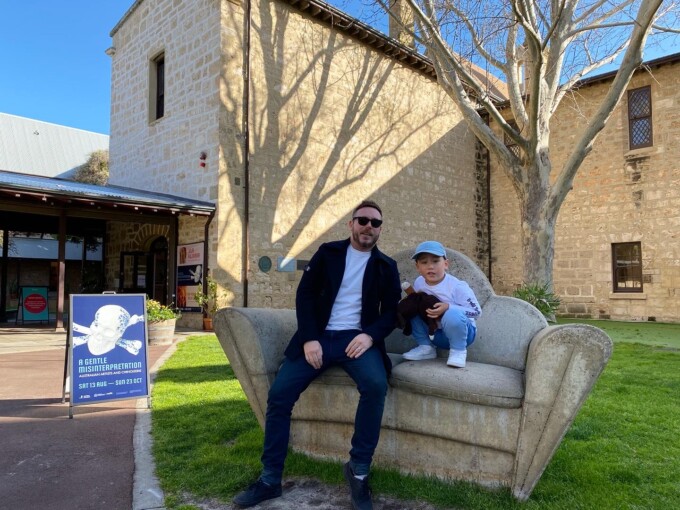 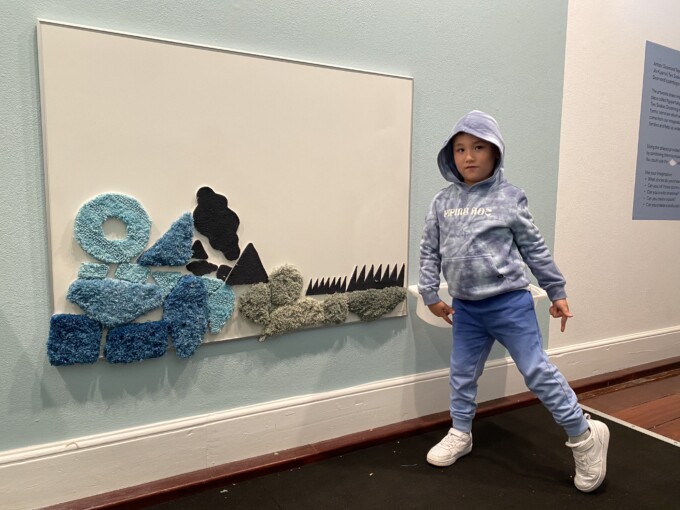 This is an artwork created by Fionn at a space where visitors can freely make crafts.
I had never thought of arranging them on the floor, so it was very original! I thought it was a novel idea, but kids don’t have any preconceived notions, so it’s nice that they don’t do things like this with a fixed sense. 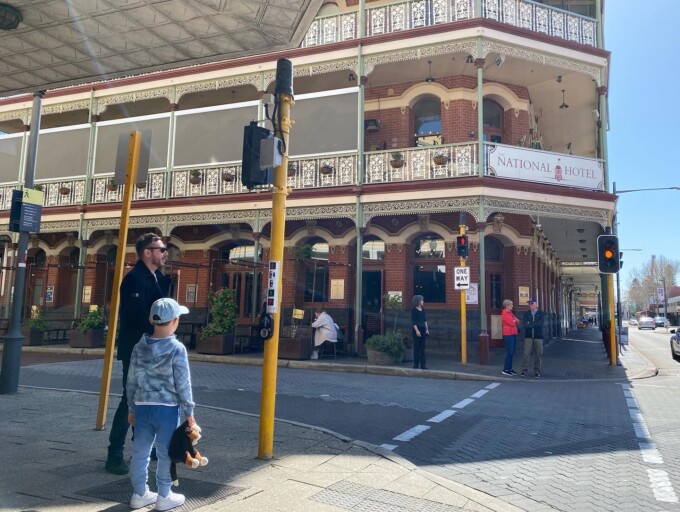 The weather was fine all day yesterday, as predicted, and we were able to walk around the city in the warm weather.
We met friends, went to a café, played in the park, and had a very satisfying day in Fremantle! 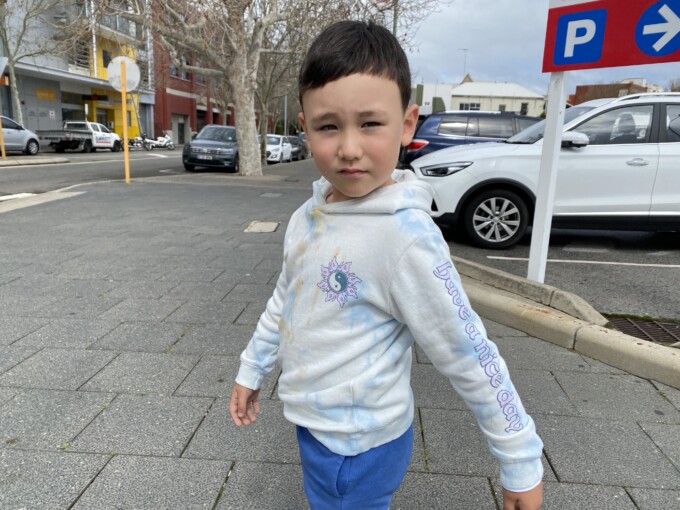 But you know who actually threw up in the car just 3 minutes before we got here?
Fionn was looking at my ipad saying it was ok even though I told him not to, and he got sick and all the oranges he ate right before we got there came out….
So as soon as we got there, I went to Target and bought some clothes. It’s similar but different, isn’t it?

I know that with kids, accidents like this happen.
I’ve learned to deal with them better, though! 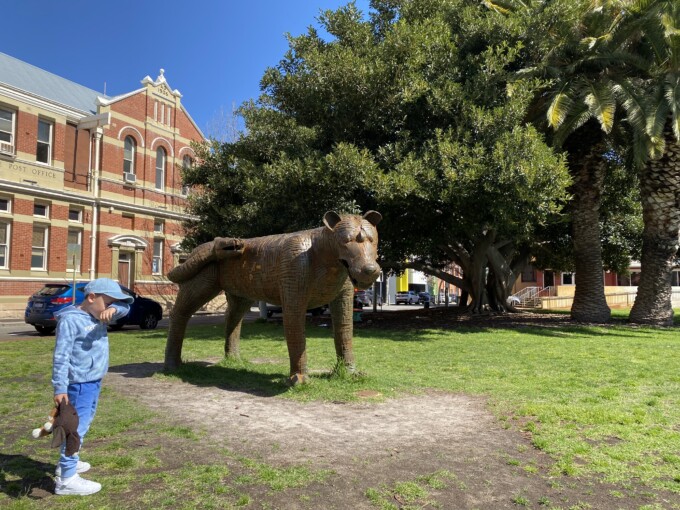 I don’t think I’ll be living in Australia for a while, but if I could live here someday, I would.
I’d love to live in this city, it’s so expensive, but it’s good motivation!