In total, it took us 30 hours to get from Perth, Australia to Shimanto, Japan, and back yesterday (Sunday) !
Today is Monday and Emmet and I are starting work as usual. 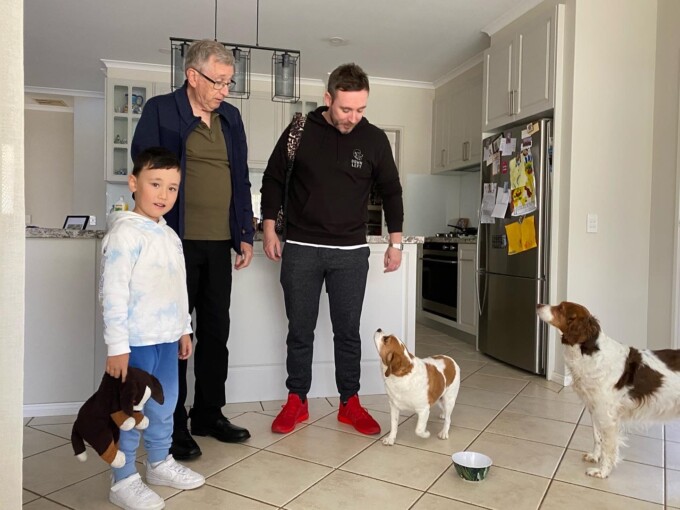 We left around 12:30 p.m. on Saturday, just after noon.
At the end of the day, Fionn wanted to take a picture with the doggies, Bella and Emmie, who have become Fionn’s favorite friends.
This is the best picture I tried hard to take. It’s not easy with two animals. 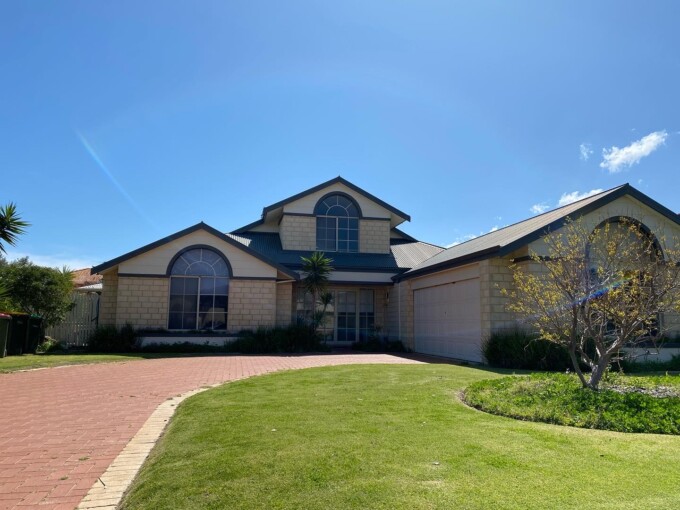 When I left the house from the car, I saw Emmy looking out of the big window on the left and Bella looking out of the front door.
Fionn cried as they seemed to know what was going on and were seeing us off.
And Emmet and I cried too. 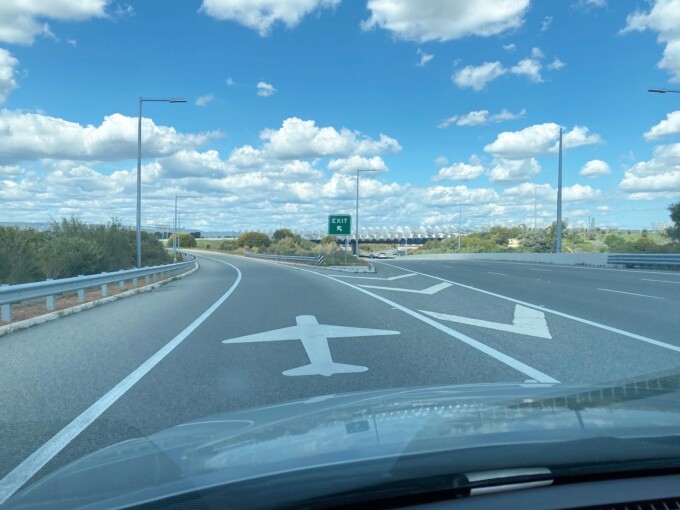 Fionn had already started counting down the days to go home.
Every morning he asked me, “How many more sleeps do I have to get before I go back to Japan?”
The day before and the day of the leaving, he cried over and over again, “I don’t wanna go back to Japan!”
Every time I saw him crying, I felt pain, too. 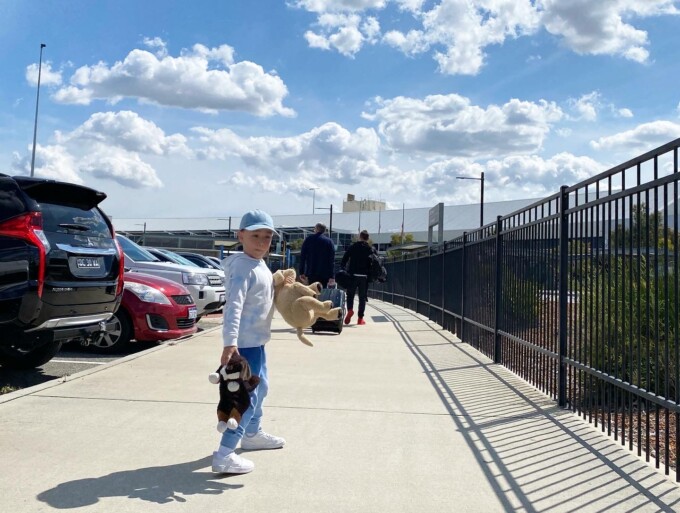 But time was ticking away, and in no time at all, we arrived at the airport where we had dropped Nana a fews days before. 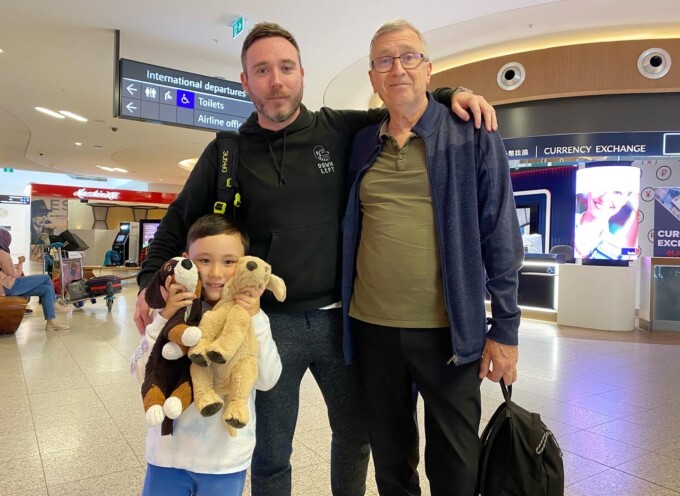 At the airport, I didn’t have the app that we were supposed to register in advance, so we didn’t register anything, and it took us forever to check in.
We spent a lot of time checking in and regretted that we had to spend less precious time with my father-in-law.

He had secretly filled up our car with gas in the morning, went shopping for us, and bought all our favorite foods.
His kindness and consideration always touched my heart. 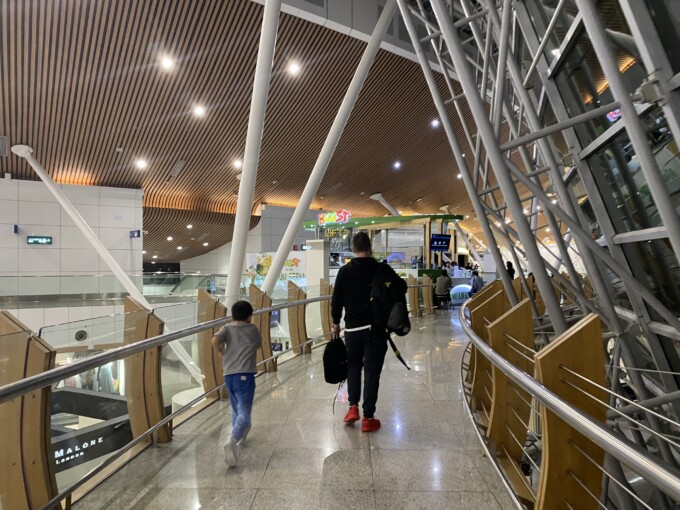 Now, it was time for a long trip.
First, we flew 5.5 hours from Perth to Kuala Lumpur, Malaysia!
I had switched to the SIM I had bought on the way there on the plane, so I was able to use my cell phone as soon as I got there. 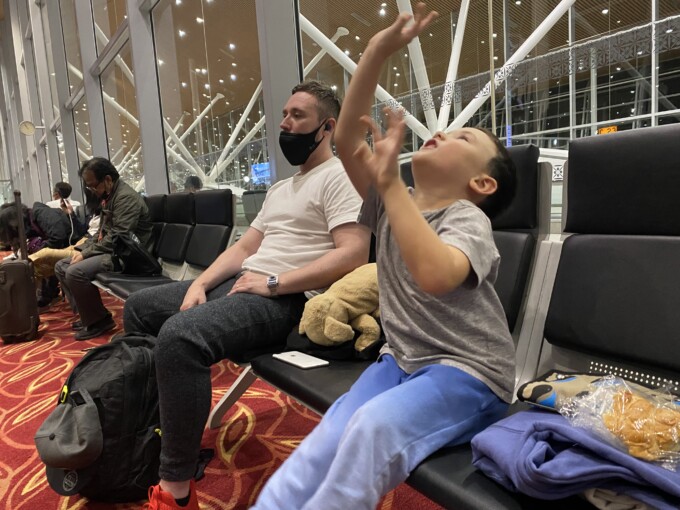 The transit time was only 2 hours, so I bought some bread and juice for Fionn, who can’t eat in-flight food at all.

The next flight from KL to Narita took 7 hours, and we were lucky enough to be seated at the front of the plane, so we were able to stretch out our legs.
And the CA was very kind and said that since it was a late night flight, we could use the empty seats and let the our kid lie down!
So Fionn slept almost the entire flight in comfort and arrived at Narita at 7:40am! 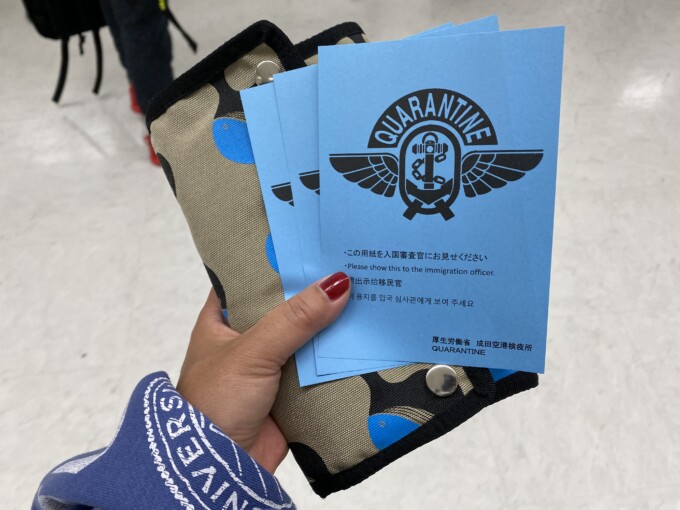 When we arrived, thanks to the app I had pre-registered, I showed them the screen (the screen turns blue if there’s no problem).
All three of us got these forms right away, and we were able to enter the country easily!
Adults, as long as you can show proof of three vaccinations, you’re good to go! We were guided by various people and took a different route than usual.
It was almost a relief that it was so easy and we didn’t get stranded. 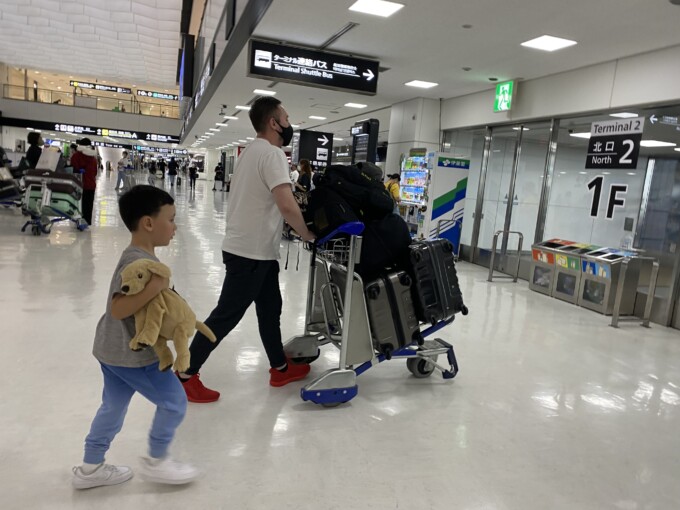 Thanks to a flight change, our flight to KL was from Haneda, but our flight back was to Narita, so the next stop was Narita to Haneda.
After looking online, we decided to take the 9:05 a.m. bus.
The price is 3000 yen for adults and 2000 yen for children, so it’s not cheap, but the most important thing is that we don’t have to carry all this baggage! 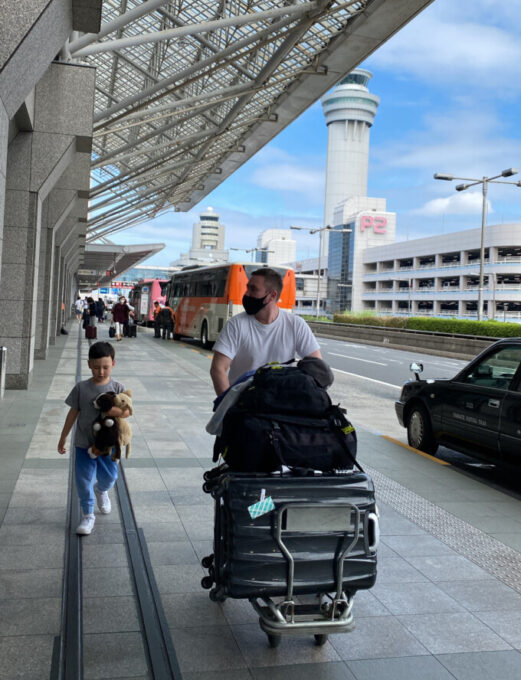 It would be too much hell to take a train or transfer to another train without this cart.
If you take the bus, you can get on it right after leaving Narita Airport, and as soon as you get to Haneda Airport, this cart will be there again!
It went smoothly with no traffic at all and we arrived at about 10:20am. 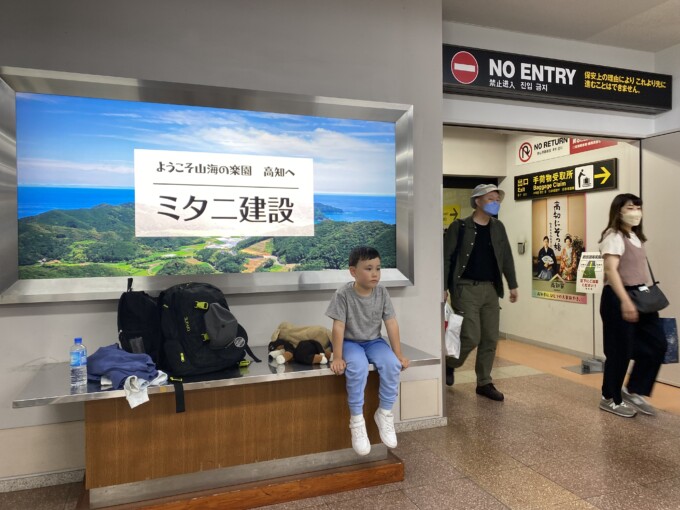 We had quite a bit of time to kill at Haneda, so we had lunch and relaxed before finally catching a 2:00 p.m. flight to Kochi.
We arrived in Kochi a little after 3:00 p.m., got in our car and left Kochi about 4:00 p.m., and arrived in Shimanto a little after 6:00 p.m.
It was a very long trip, leaving at noon on Saturday and arriving Sunday night. 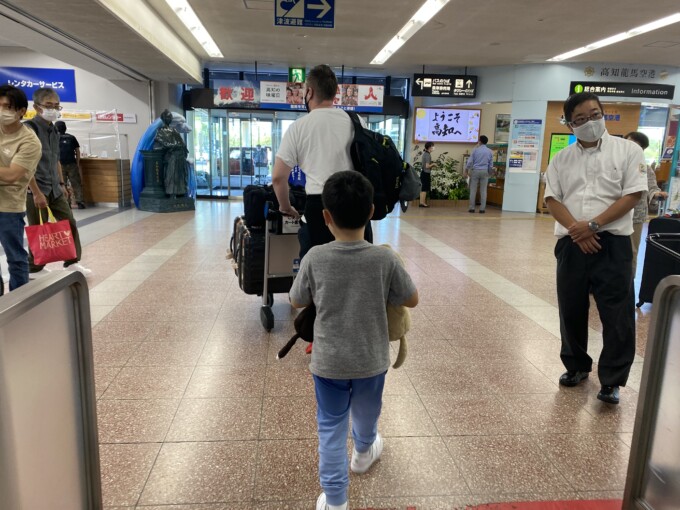 So last night we ate the dinner we had bought and went to bed around 11:00 pm, halfway through unpacking.
And I woke up once at 7:30, went back to sleep twice, and it was 10:30!
The whole family slept deeply for almost 12 hours, and today we finished all the unpacking safely, did the laundry, and cleaned the house.
We finally got back to our normal lives! 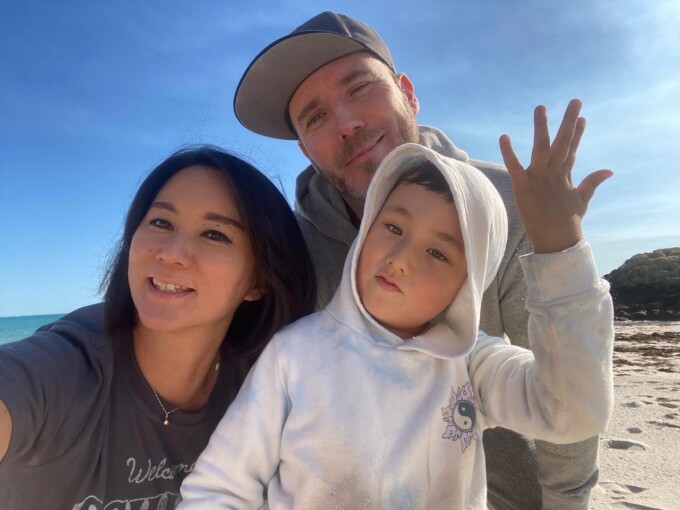 When we came back, the house felt very small and many things felt strange, but today things are back to pretty much normal.
Everyone in the family, but Emmet in particular, is very homesick, so we’ll have to decide on the next date for Perth soon!

Oh, I really want to have a house in Australia and a house in Japan! I wish I could make that goal come true!

PS.
I’ve been posting real-time stories very frequently for the past three weeks, so I hope many of you have enjoyed them.
I had so many people tell me, “It was so much fun, I felt like I was on the trip with you!” ” I’m sad to go back to Japan even though I didn’t go with them.”
“I was looking forward to it every day, so it’s a shame it’s over.” I was so happy to receive messages like them.
Thank you for your support over the past three weeks!