The last week of every month is the advancement test at the swimming school.
For Fionn, it is the day when he may or may not get a badge to wear on his hat. No nerves at all! 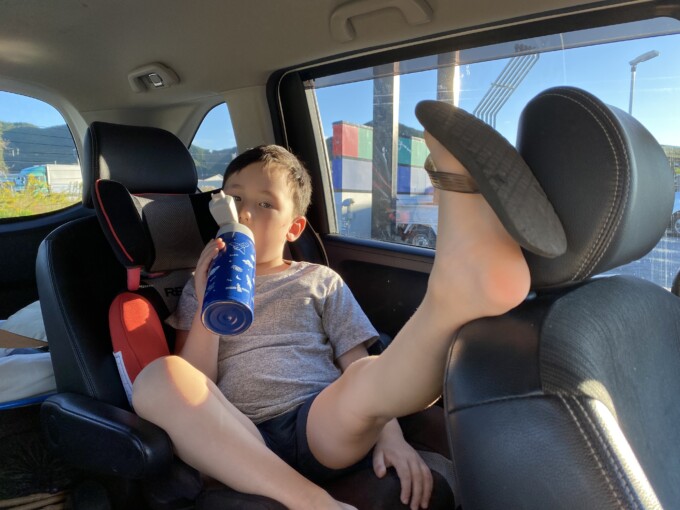 When I turned around and said, “We’re almost there,” he looked like this…. Too bad for his manners. 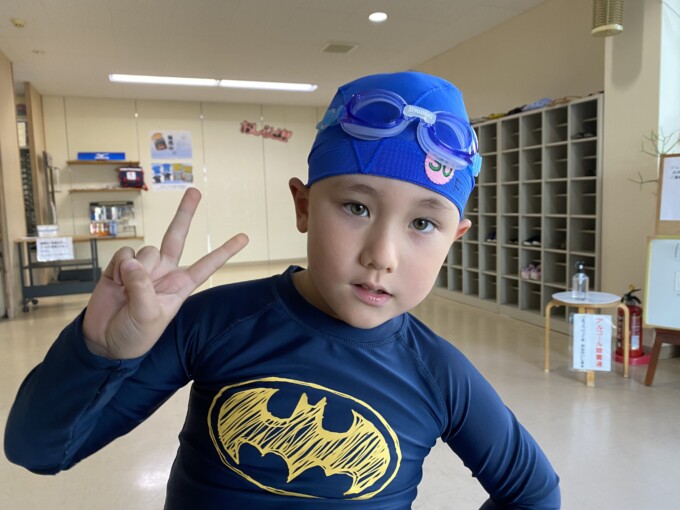 It’s been about 3 months since he started learning, but he went to Australia for 3 weeks and took a week off after that, so it’s actually been 2 months.
He is really looking forward to going every week, but he just can’t do the next step, “opening his eyes underwater”！！ 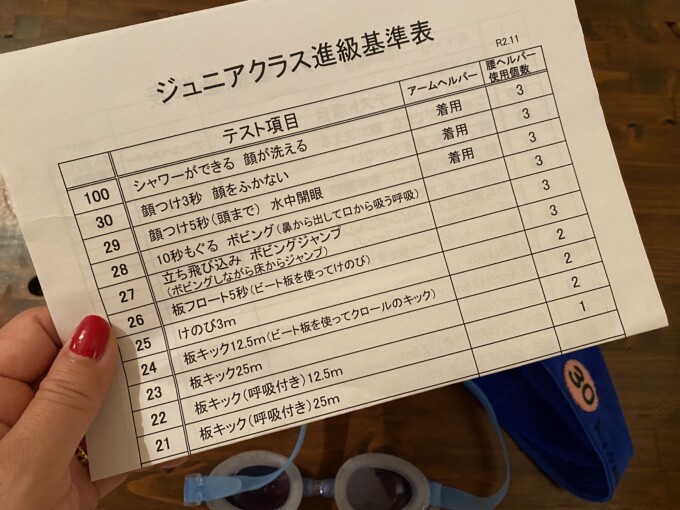 By the way, he got the 30th grade in his first advancement test, but today is his second try for the 29th grade.
He said, “I’ll try my best! But I won’t open my eyes!” He went to the pool…. I don’t think he’s going to pass.

The coach was trying his best to explain something to Fionn, but Fionn kept shaking his head so much that I could tell he was probably saying “No, no, no” the whole time…. Sure enough, I didn’t see him take off his goggles and dive, so he won’t pass the test today. 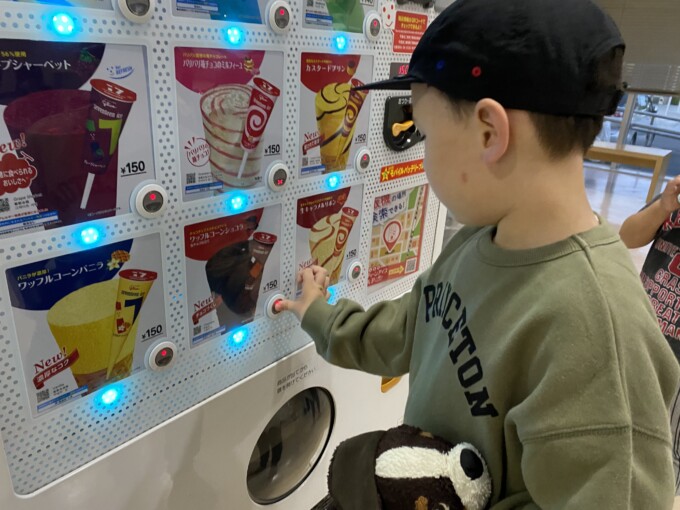 But when he came back to the changing area, he opened his mouth and said regretfully, “Coach, they won’t give me a badge!”
Of course they wouldn’t! You kept shaking your head and didn’t take off your goggles! lol 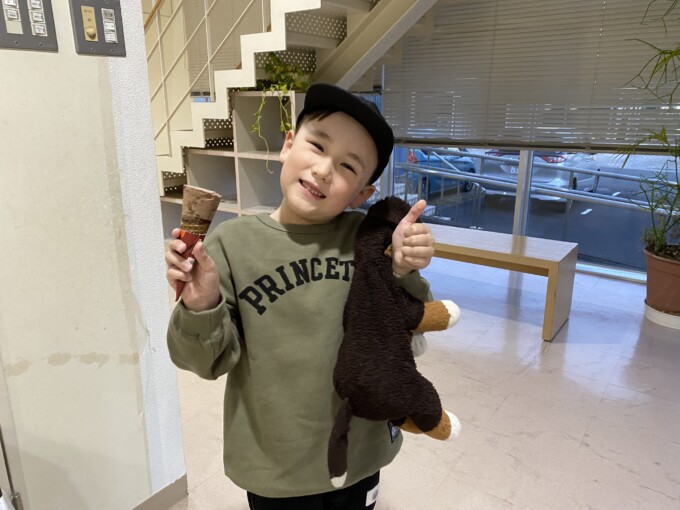 But she was a really kind coach, and she praised him very much, saying, “You couldn’t put on your face even with goggles on, but now you can do it in the water.” “See? I did my best, so I want ice cream!” He asked for ice cream.
He is really doing well, isn’t he? 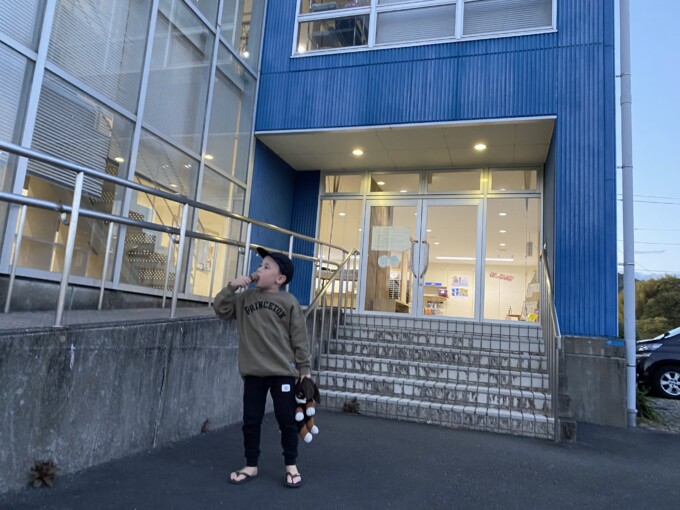 Well, it’s not like our days when we had to go to the pool crying in the water because it was so painful and traumatizing.
Just the other day, my sisters and I were talking about that time, and it’s amazing in a way that a mother could make her children go to the pool for so many years with a devil-may-care expression on her face, even though her children were in such pain and crying because we didn’t want to go there. I don’t think we could do such a thing to our children. I don’t know if it’s the times or what, but Showa-era parents are so scary! 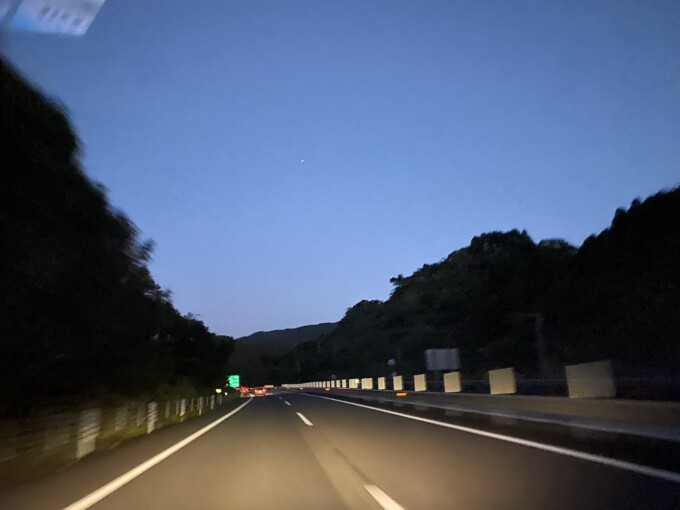 There are still two months to go until the winter solstice, and it’s already dark at 5 o’clock….
In midwinter, we go home in the dark. It’s still warm enough to wear short sleeves during the day, but it gets cold in the mornings and evenings.

Be careful not to catch a cold!